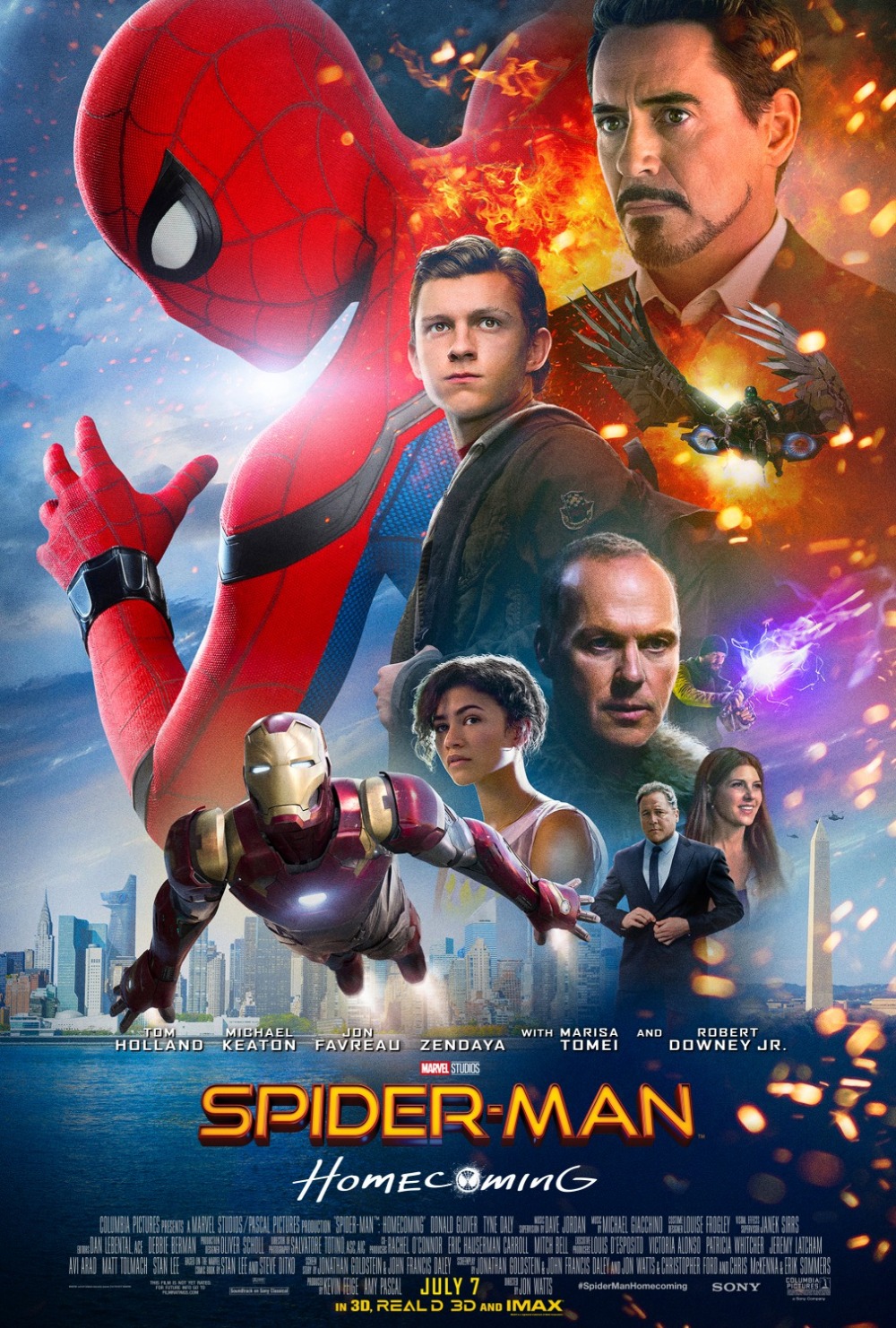 The thought of another “Spider-Man” reboot had me rolling my eyes as this comic book character has already gotten through one too many versions already. But after watching Tom Holland portray him in “Captain America: Civil War,” I found myself getting excited about where the character could go from there. So, it’s my relief and delight to tell you all that “Spider-Man: Homecoming” proved to be a really good movie which successfully breathes new life into a franchise suffering from misdirection and too many chefs in the kitchen. With Holland, we also get the best incarnation of Spider-Man/Peter Parker yet as he gives the role a spirited turn full of youthful energy and boundless enthusiasm.

Director Jon Watts and the screenwriters, too many to name here, wisely avoid regurgitating Peter Parker’s origin story the way “The Amazing Spider-Man” did, and they instead hit the ground running. Peter has received a new Spidey suit courtesy of Tony Stark (the always welcome Robert Downey Jr.), but he is not quick to welcome Peter into the Avengers fold. Instead, Peter has to spend his days at high school like any other teenager and with his equally intelligent best friend Ned (Jacob Batalon). But when a new villain who even the Avengers don’t see coming called the Vulture starts wreaking havoc in Queens, New York, Peter finds himself too impatient to just sit on the sidelines and let him get away with his felonious deeds.

Holland really hits it out of the park here, and his boundless enthusiasm is set up perfectly through a home movie Peter Parker makes which encapsulates his time with the Avengers and battling Captain America. While the character remains the conflicted superhero who has trouble balancing out his school life with his crime stopping job, Holland makes the role his own and brings such an infectious spirit which makes the proceedings endlessly entertaining. Whereas Tobey Maguire and Andrew Garfield made Spider-Man too emo for his own good, Holland doesn’t go the same route, and his interpretation is much closer to the character we grew up reading in the comic books. I was frightened he might become too enthusiastic for Spider-Man’s own good, but his performance never becomes ingratiating and he also shows us a vulnerability which feels genuine and not easily achieved.

Of course, comic book movies need a good villain, and “Spider-Man: Homecoming” has one and, thank goodness, only one. The Vulture is an interesting choice as the person who inhabits him, Adrian Toomes, is as regular a guy as Peter Parker is a regular kid. Adrian is not so much a bad guy as he is a man who feels betrayed and left behind by those who have it all. His belief is that those in power couldn’t care less about the little man or anything he could possibly contribute to society, so he does many villainous things for his own benefit. But unlike many James Bond villains, he is not out for world domination. He just wants to provide for his family like any parent does.

It is a great pleasure to see Michael Keaton return to the world of comic book movies, and he arrives here just as “Batman Returns” celebrates its 25th anniversary. As Adrian Toomes/The Vulture, Keaton renders him into someone all too human even as he lays waste to Queens, New York and anyone foolish enough to get in his way. Even as the character sinks deeper and deeper into the criminal life, Keaton gives Vulture a humanity, albeit a corrupted one, which makes him seem more threatening and morally complex.

The rest of the cast is excellent, and it’s great to see Jon Favreau here as Happy Hogan gets more screen time here than he has in previous Marvel movies. One of the last scenes he shares with Holland is especially good as Hogan comes to see just how much attention he really should have paid to Peter. Downey Jr. continues to bring a sharp attitude to Tony Stark/Iron Man, but he also allows the character to evolve as Tony finds himself becoming a father figure to Peter, albeit a reluctant one. Even Chris Evans shows up in a cameo as Steve Rogers/Captain America, and he steals every scene he is in.

There has been a lot of talk of how Marisa Tomei was too young to play May Parker in “Spider-Man: Homecoming,” but that’s ridiculous. If May Parker is the sister to Peter’s mother, she wouldn’t be as old as Rosemary Harris now, would she? Either way, she brings a wonderful sass to this role, and she remains an enormously gifted actress after all these years. All the same, I wished we got to see more of her here as she has a wonderful chemistry in her scenes with Holland. I kept waiting for Tomei to be the Yoda to Holland just as Harris was to Tobey Maguire, but I guess we will see this come about in the inevitable sequel.

Watts previously directed “Cop Car” which was about two young kids who steal a police car from a corrupt sheriff. Essentially, that movie was about kids getting into the kind of trouble they would be smart to avoid, and “Spider-Man: Homecoming” has the same thing going on. Peter eventually comes to see he is in over his head to where Tony has to take away his Spidey suit. This sets up the third part of the movie where Peter has to see there is more to being a superhero than having a really cool suit. With great power does come great responsibilities, but this Spider-Man comes to see how great power needs to come from within as it cannot simply be co-dependent on nifty gadgets.

Some of the action scenes are a little too frenetic to where it’s hard to tell what is going on, and I was hoping for a little more in the way of emotional gravitas which highlighted Raimi’s first two “Spider-Man” movies. Still, it is a surprise to see how wonderfully inventive “Spider-Man: Homecoming” is as it gives us what appears to be a formulaic story, and yet it keeps giving us one surprise after another, all of which are too clever to spoil here. Just when you think you know how things will play out, the script veers in another direction you don’t see coming, and it makes the movie more interesting as the conflicts become increasingly intense.

I came into “Spider-Man: Homecoming” believing it could never top “Spider-Man 2” which has earned its place among the best comic book/superhero movies of all time. This one doesn’t, but it lands at number two among the “Spider-Man” movies as it is endlessly entertaining and wonderfully cast. My hat is off to the filmmakers for breathing new life into this franchise during a summer where so many others are suffering from fatigue, and I am infinitely eager to see where Spider-Man will go from here. For now, Columbia Pictures appears to have learned from the mistakes made with “Spider-Man 3” and “The Amazing Spider-Man 2” as this iteration is neither an overstuffed bird or a 2-hour long trailer for movies which never materialized. Here’s hoping the filmmakers keep from making those same mistakes in future installments.

And yes, there are two post-credit sequences, and both are worth sitting through the end credits to get to. The second one is priceless and brilliant. Trust me, you’ll see.

Showcasing the best of female talent. Filmmakers and Screenwriters