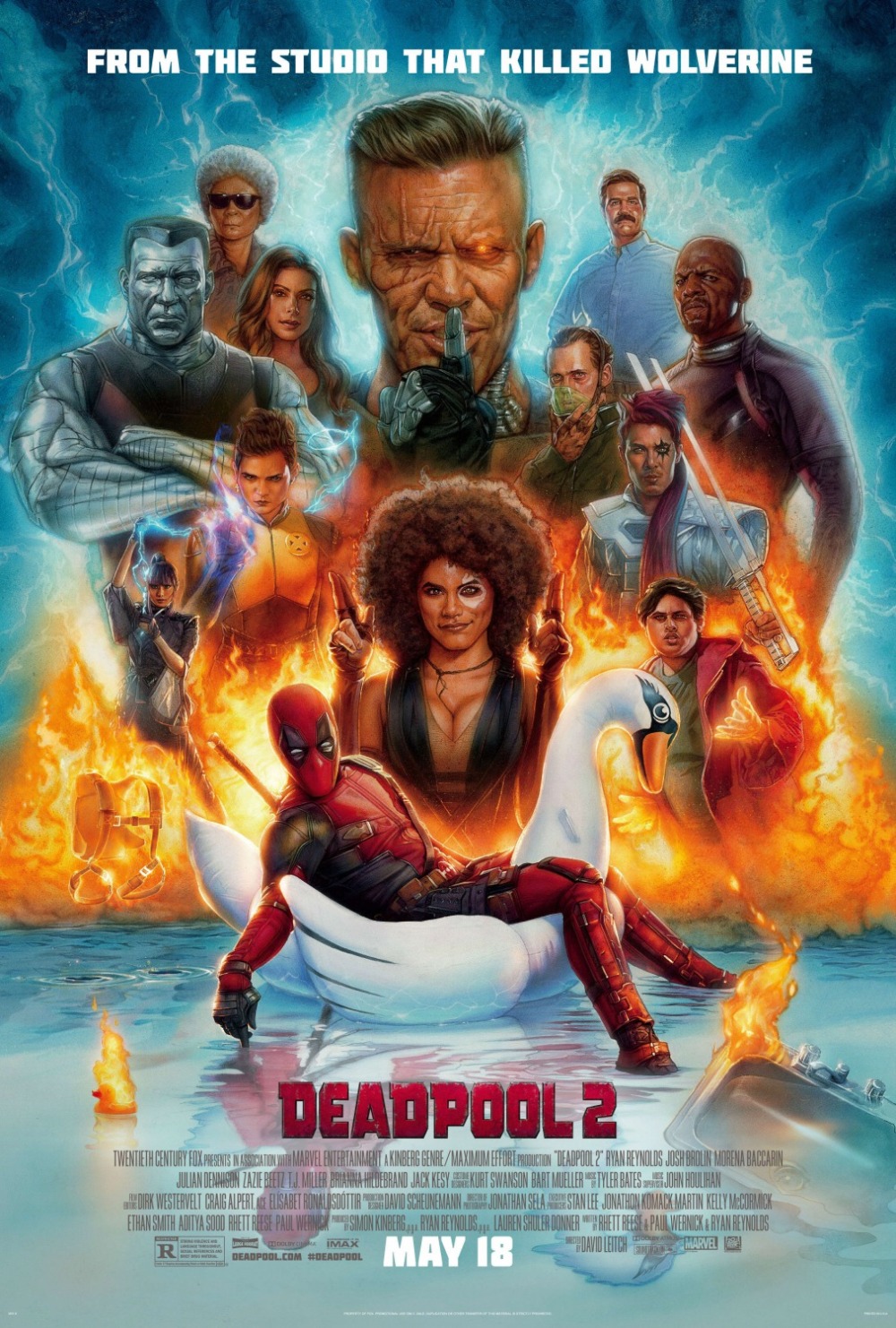 I want to say that when “Deadpool” was released, it was a breath of fresh air in a time of endless comic book/superhero movies, but this description doesn’t do it justice. The air coming from the 2016 box office hit was filthy, and we loved how Ryan Reynolds, Tim Miller and company refused to play it safe with this Marvel Comics character to where a PG-13 rating just wasn’t going to do it for them. But in addition to being so gleefully profane, the movie also had a big heart as it ended with a message of loving someone inside and out instead of just admiring what is on the surface. If there ever was an R-rated movie for today’s teenagers to sneak into, “Deadpool” was it.

Now we finally have its long-awaited sequel, “Deadpool 2,” which was preceded for the longest time by a pair of jokey trailers which didn’t have much in the way of new footage, but instead put its wisecracking hero in situations which didn’t always put him in the best light, and we laughed our asses off all the same. Surely this sequel couldn’t match the inventiveness and comedic genius of the original, right?

Well, I am very happy to report that “Deadpool 2” proves to be just as funny and entertaining as its predecessor, and in some ways, I thought it was even better. While this one looked as though it would suffer from overkill as the recent “Kingsman” sequel did, everyone in front of and behind the camera keeps the energy level high and the laughs coming in rapid succession. With Reynolds constantly breaking the fourth wall and a plot which refuses to make clear right away of where this sequel is heading, I was never sure of what would come next. As a result, I could never take my eyes off the screen.

So, what has Wade Wilson/Deadpool been up to since his last expletive-laden adventure? Quite a bit actually, and it has thrust him into a realm of despair he doesn’t see himself escaping from. What ends up giving him a reason to live is helping to protect Russell Collins (“Hunt for the Wilder people’s” Julian Dennison), a young mutant who goes by the name of Firefist for reasons which become immediately clear to where Pyro’s penchant for lighting everything up pales in comparison. But in the process, they are both met by Nathan Summers/Cable (Josh Brolin), a time-traveling cybernetic mutant soldier who is looking to right a terrible wrong, and his main target might not be who you think.

The amount of pop culture references is countless in “Deadpool 2,” and you may need to watch this sequel twice to catch all of them. Right from the start, Wade wastes no time in skewering popular icons like Wolverine who made his swan song in last year’s “Logan.” From there, we watch as this particular comic book character lays waste to gangsters to the tune of Dolly Parton’s “9 to 5,” gleefully provides a spoof of the James Bond opening titles which include such classics as “directed by one of the guys who killed the dog in ‘John Wick,’” and he makes you look at Barbara Streisand’s song “Papa, Can You Hear Me?” from “Yentil” in a very unnerving way. Also, he is quick to call you out on obvious references such as a line from “Robocop,” and by that, I mean the original, not the remake. Whether it’s a good or bad guy you are talking about here, at least they have great taste in movies.

However, the laughs and action come at us so quickly in “Deadpool 2” to where it takes longer than usual to figure out what the movie’s main plot is. At times, it seems like the filmmakers are geared towards throwing jokes, action scenes and filthy jokes and the expense of an actual story, and it looks as though we won’t find a story until the third act. Even Wade at one point says if he and his newly-appointed X-Force achieve their goals, there won’t even need to be a third act. Of course, I was having too much with this sequel to criticize this point all that much, and a story does indeed emerge.

Reynolds has come a long way from his “Van Wilder” days to get to this point. He’s given memorable performances in “Buried” and “The Proposal,” but his career has been overshadowed by having starred in one of the worst comic book movies ever, “Green Lantern.” “Deadpool” served as his redemption for that cinematic misfire, and his dedication to staying true to Wade Wilson and his alter-ego has been commendable considering the ill-fated debut he made as this character in “X-Men Origins: Wolverine.” Watching Reynolds here is a reminder of what a gifted comedic actor he can be when given the right material, and it is impossible to picture anyone else in this role instead of him.

Tim Miller stepped out of the director’s chair for “Deadpool 2,” and in his place is David Leitch who assisted Keanu Reeves and Charlize Theron in their path to ass-kicking glory in “John Wick” and “Atomic Blonde.” I was impressed at how he managed to keep this sequel’s energy and laugh quotient up and running throughout as I kept waiting for the whole thing to burst at the seams. It’s no surprise “Deadpool 2” lacks the freshness of the original, but it does have the same level of insane energy and even more to spare beyond it.

And there’s Josh Brolin who appears in his second Marvel movie in two months as Cable. Just as he did in “Avengers: Infinity War,” he gives this iconic comic book character a wounded humanity which makes especially complex and threatening throughout. Even when Cable undergoes a change of alliances which is almost as unbelievable as any in “The Fate of the Furious,” Brolin keeps a straight face throughout the proceedings which become increasingly over the top. It’s also great to see how Brolin has a good sense of humor about himself as he endures barbs relating to “The Goonies,” and looking at his scared face here made me want to say, “Who do you think you are, Thanos?”

It’s also nice to see a variety of new and familiar characters here like Karan Soni whose character of taxi driver Dopinder has developed a bit of a blood lust which Wade is not quick to take all that seriously. Stefan Kapičić gets a bit more to do as Colossus in this sequel as this character does what he can to make Wade a better person. The character of Peter, a regular person with no superpowers, is an inspired addition to this series, and I would love to have seen Rob Delaney play him in more scenes here. T.J. Miller also returns as bar owner and Wade’s best friend, Weasel, but considering his penchant for making fake bomb threats, I believe this will be the last time we see him in this role.

“Deadpool 2” could have been too much of a good thing, but I had so much fun with it to where it didn’t matter if it was. I can’t remember the last time I laughed so hard at a movie, and it is nice to watch a movie where the jokes hit far more often than they miss. Reynolds, like Ben Affleck, have a strong sense of humor about his past mistakes in the world of cinema, and its fun seeing a movie star crack a few laughs at their own expense However, I am curious as to why he did not lay waste to “Blade: Trinity.” That misbegotten sequel was every bit as bad as “Green Lantern.”

And as always, be prepared for a post-credit sequence which is by the funniest of its kind since “Spider-Man: Homecoming.” It is too damn hilarious to spoil here, and you have got to see it for yourself.