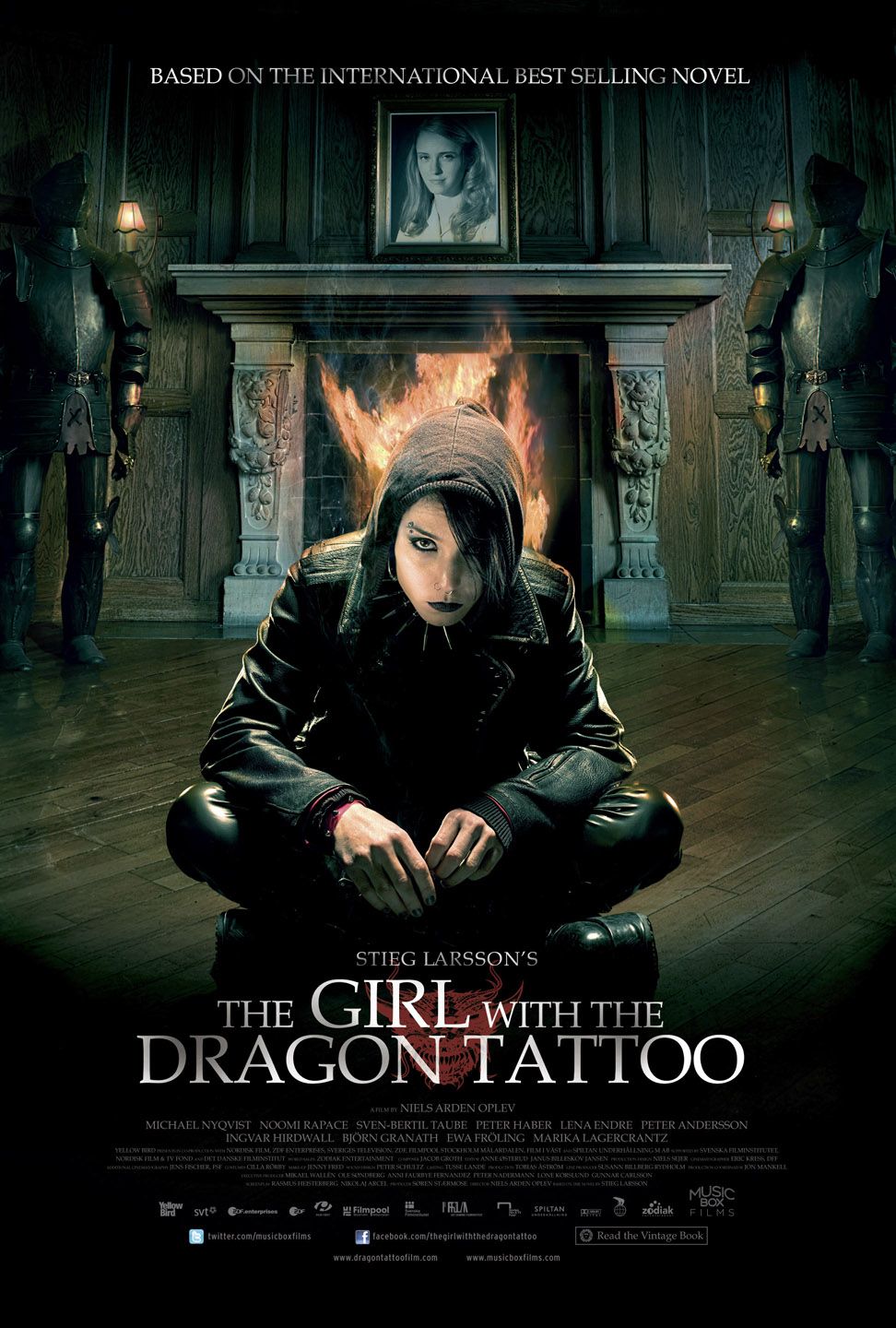 You look at her from a distance, and all you see is just another punk chick who’s nothing but trouble; born under a bad sign. You’d figure she’s pierced her body in lord only knows how many different places, and the mascara applied to her eyes might make you see her as an intimidating threat. Not once does she try to adjust her antisocial behavior or clothing attire in the workplace, and this is a sign of how unwilling she is to compromise her learned set of values.

But once you get to know her, you will find Lisbeth Salander is not your average punk rock girl. In fact, she’s a brilliant hacker and researcher who knows more about yourself than you could possibly realize. Bo Diddley was right when he said you can’t judge a book by looking at the cover. I mean you could, but she would just kick your ass because a rough upbringing has more than prepared her for the harsh reality of life.

Lisbeth Salander is the heroine of “The Girl with the Dragon Tattoo,” a brilliant mystery/thriller based on the best-selling novel by the late Stieg Larsson. Many have said Noomi Rapace gives a star making performance as Lisbeth, and nothing could be more true. She finds the heart of this incredibly intelligent yet mysterious character whose past is hinted at but never explained until the end, but we come to get enough of a glimpse which helps us understand where she is coming from. Lisbeth sets the bar high in terms of compelling characters (and not just females) you can find in movies from any country.

Right from the start, this film absorbs us in its compelling mystery involving the case of a missing girl which has remained unsolved for 40 years. Mikael Blomkvist (Michael Nyqvist), the publisher of Millennium Magazine, is coming off of a trial where he was wrongfully disgraced, and soon after he is hired by rich man Henrik Vanger (Sven-Bertil Taube) who wants him to look into the disappearance of his great-niece Harriet who was last seen years ago when she was only 16. Henrik believes Harriet was murdered by someone in his family, and it’s a very dysfunctional family filled with those who will fight one other for the whole inheritance without a single thought for anyone else.

Please believe me when I say “The Girl with the Dragon Tattoo” puts so many American movies of this genre to utter shame. Seriously, many of the mystery thrillers I have seen in the past few years are full of plot holes Michael Bay could lead both Autobots and Decepticons through no matter how enormous they are. Instead of being enthralled, we come out of them feeling like they are average at best, but they do allow us to feel smarter than the filmmakers since we spotted all their foolish mistakes.

Compared to all those wannabes, “The Girl with the Dragon Tattoo” has a very well-constructed plot to where if it is at all flawed, we certainly don’t realize it because we are too caught up with what’s unfolding onscreen. But where this movie truly succeeds is as a character piece in how deeply it involves us in the lives of two very different people. The two main characters are well developed and are very complex, something I always look forward to seeing. Lisbeth is a wounded person, damaged by life, and the trust she puts in others is exceedingly rare. These two end up coming together as Lisbeth has been hacking into Mikael’s computer as part of his case, and she ends up giving him some clues which have eluded him. While she is hesitant to get involved with Mikael professionally or emotionally, he points out how she contacted him in a way that is easy to track.

Lisbeth and Mikael are indeed an odd couple, and yet perfectly matched to work on the coldest of cases. They are also coming together at a time where they are in a very isolated state, having been largely misunderstood by just about everyone around them. While many view them negatively, they come to see one another as who they really are. The more they work together, the more they gain each other’s trust. In the large scheme of things, these are two people who do not let others define them.

“The Girl with the Dragon Tattoo” was directed by Niels Arden Oplev, a three-time award-winning director from Denmark. He deserves a lot of credit for keeping us deeply involved in a movie that could have easily overstayed its welcome. Not once did I find myself getting bored or restless while watching it. Oplev balances out the story and the acting to where they are on equal footing and never upstaged by style. Never does he indulge in quirky camera angles or other visual elements which would have taken away from this movie. Some directors just love to show off instead of just trusting what is there, and Oplev has clearly laid his complete trust in the story and the actors cast.

Noomi Rapace brings a powerful life force to Lisbeth Salander, a character destined to become as iconic as Clarice Starling from “The Silence of the Lambs.” Beneath her hard exterior is a person whose trust in others is practically non-existent for reasons which eventually become clear. Rapace more than succeeds in making Lisbeth tough as well as sympathetic. Her performance could easily have been a caricature, but she proves to be far too good of an actress to allow this to happen.

Michael Nyqvist does excellent work as Mikael Blomkvist, showing his strong resolve and utter frustration without ever going overboard in his performance. When he is first shown to the audience, it is as a man who has just been found guilty. We don’t know why at first, so we can only assume he had it coming or perhaps he was framed. We see him walking down the street when his picture comes up on television, pretty much defining him in the eyes of those who do not know him personally. But Nyqvist invests his character with a strong moral code which he never surrenders even when it seems smart for him to do so. We sympathize with Mikael as it always seems the wealthiest of people are more than willing to smash down the individual, especially when said individual is correct in what he or she discovers about them. The truth always seems to come at a heavy price.

Peter Andersson doesn’t even try to hide the hideous slime that consumes his utterly immoral character of Bjurman, a sexually abusive bastard who takes advantage of Lisbeth in the worst way possible. Even worse, he is her new legal guardian who takes charge of her trust fund after her original guardian suffers a stroke. Not to worry though, the pain Bjurman inflicts on Lisbeth comes back at him in a most vicious way, showing us once again what you see on the surface does not even begin to tell you the whole story.

Two sequels based on Stieg Larsson’s follow up novels have already been made, and I eagerly await the opportunity to see them on the big screen. They will have a tough act to follow after “The Girl with the Dragon Tattoo,” but with Rapace and Nyqvist reprising their roles, they will continue one of the more interesting and unusual partnerships you can hope to find in cinematic history.

It will be interesting to see who will be the next idiotic human being who foolishly thinks they have complete control over Lisbeth. Even more interesting will be in what way Lisbeth lets said person know just how wrong they are. Pray for whoever it is.