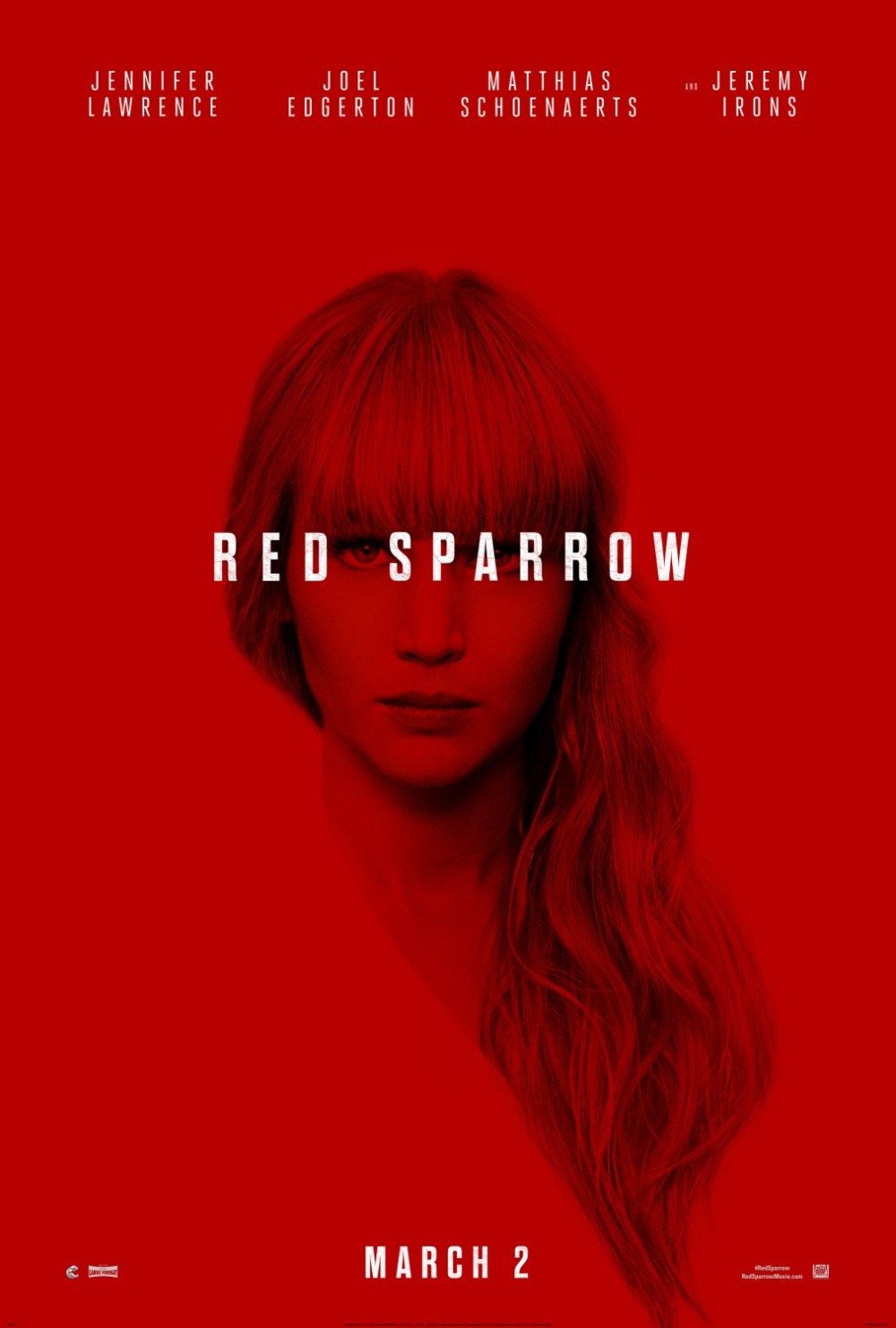 I will be curious to see what audiences will have to say about “Red Sparrow” after seeing it. Those expecting a Jason Bourne-like adventure or something along the lines of “Salt” which starred Angelina Jolie as a sleeper spy may be disappointed as this film feels more like an adaptation of a John Le Carre novel where the lives of spies are not the least bit romanticized. The movie itself is based on the book of the same name by Jason Matthews who, like Le Carre, was once a member of an intelligence agency. What results is a motion picture which is not as interested in gunfights or car chases as it is in the mind games spies play with one another as the art of manipulation becomes a far more powerful weapon than a bullet. It also serves as yet another reminder of how Jennifer Lawrence is one of the best things in movies these days as she sucks you right into her gaze and never lets you go.

Lawrence plays Dominika Egorova, a gifted Russian dancer who suffers a career-ending injury at the movie’s start. With her dancing now a thing of the past, she and her mother find their future looking particularly bleak as the loss of their apartment and medical care become imminent. As a result, she accepts an invitation from her loving but undeniably devious uncle, Ivan (Matthias Schoenaerts), to work for Russian intelligence. But whereas most spy movies see recruits being trained in the ways of martial arts and weaponry, the recruits we see here are instead trained in the ways of manipulation. Or, more specifically, sexual manipulation.

The scenes where we see Dominika and others being trained in the ways of manipulation help make “Red Sparrow” stand out among other spy movies as I can’t remember many which see new recruits being made to use their minds and bodies as weapons. Heck, the only one I can think of like it is “Remo Williams: The Adventure Begins,” and that film came out back in the 1980’s. As the Headmistress of the spy training school, Charlotte Rampling gives us a passive aggressive version of the sadistic drill instructor from “Full Metal Jacket” as she forces her students into situations which will test their mental defenses instead of their physical ones. We never see her raise her voice or yell at her pupils, but this is because Rampling makes it clear why she doesn’t need to do so. You can question her, but she will make you see why you shouldn’t have in the first place.

Once “Red Sparrow” moves from the school and into Dominika’s mission which involves her meeting up with CIA agent Nathaniel “Nate” Nash (Joel Edgerton), the story enters into familiar territory as we watch these two spies from different countries fall for one another in a way which goes against their training. Still, it’s fascinating to watch Lawrence and Edgerton test one another as each try to crack through the mental they have built to protect themselves. It reminded me of when James Bond went head to head with Vesper Lynd in “Casino Royale” as each tried to learn more about the other. Both kept their guard up as they wondered who would break first.

Ever since her breakthrough performance in “Winter’s Bone,” Lawrence has proven to be an amazing talent as she brings a natural charisma and a raw energy few others can these days. Her work in “Red Sparrow” is no exception as she kept my eyes glued to the screen from start to finish. Seeing her go from a gifted ballerina to a methodical agent is mesmerizing as Dominika looks to get the upper hand in each situation she gets thrust into, and Lawrence nails each note of her character while maintaining a Russian accent which doesn’t fail her. She is not out to give us another variation on Katniss Everdeen here as the character of Dominika takes this acress down a road she has not traveled down before.

Speaking of Katniss Everdeen, “Red Sparrow” was directed by “The Hunger Games’” Francis Lawrence, and he certainly knows how to get the best out of his leading actress. In addition, he also keeps a solid level of tension flowing throughout. Yes, the movie does run a little too long, and the torture scenes we see pale in comparison to those in spy movies of the past. Heck, a similar torture scene in “Casino Royale” was far more painful to endure, and that 007 adventure was PG-13. Still, Francis gets plenty of mileage out of the mind games each character plays on the other.

It’s impossible not to think about the #MeToo movement while watching “Red Sparrow” as Lawrence is greeted with brutal assaults on her character by men prepared to take what they want without anything resembling remorse. Like Lisbeth Salander in “The Girl with the Dragon Tattoo,” her character of Dominika is forced to exist in a male-dominated world which leaves everyone of her gender little in the way of options, something which needs to change now. This makes the character’s revenge all the more fulfilling as she puts those men in their place in sometimes painful ways. Of course, this will most likely make “Red Sparrow” harder to sit through for many audience members.

“Red Sparrow” does have its flaws, and its conclusion is not as fulfilling as I thought it would be, but I find it impossible to deny the compelling effect it had on me overall. And again, Jennifer Lawrence reminds us why she is one of the most enthralling actors working in movies today. She dares you to look into her eyes to see if you could possibly find your way into her soul. Even as the movie goes through the familiar tropes of the spy movie genre, the Oscar winner keeps us watching her every move.

They say the truth shall set you free, but in the world of “Red Sparrow,” the truth is likely to get you killed. Realizing this reminds me of the Depeche Mode song “Should Be Higher” as David Gahan sung about how “lies are more attractive than the truth.” For Dominika and Nate, their lies have to be. Or do they?