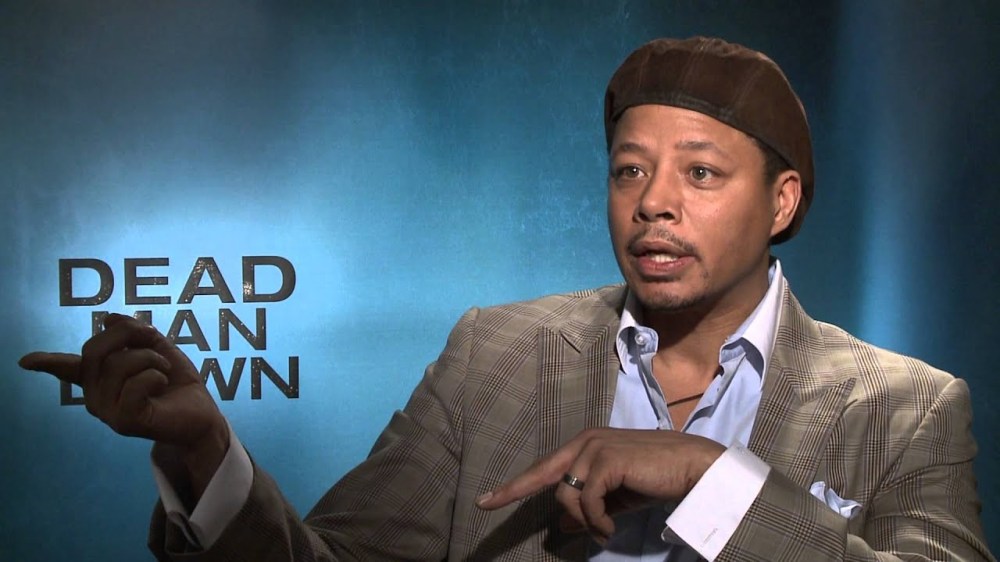 It was so infinitely cool to hang out with actor Terrence Howard during the Los Angeles press day for “Dead Man Down.” Hearing him speak was endlessly fascinating because, on top of being an actor, he is also very knowledgeable on the subjects of science and the Bible, and his intelligence has led him to make a number of interesting choices in the roles he has played. Throughout the interview, he talked about how he chose to portray crime lord Alphonse Hoyt and what the future holds for him as an actor.

Now when you hear about crime lords in movies, you usually expect actors to give scenery-chewing performances which are way over the top. But at the same time, many actors fall into the trap of making these characters seem like comic book characters as opposed to fully developed human beings. The beauty of Howard’s performance in “Dead Man Down” was that it was never over the top, and he allowed himself to portray Alphonse in a way you wouldn’t necessarily expect. In his conversations with the film’s director Niels Arden Oplev (who made the original version of “The Girl with the Dragon Tattoo“), Howard came to realize he wouldn’t be playing the same old crime lord we have become all too familiar with.

Terrence Howard: That man (Oplev) told me, “I’m going to change your life. I’m going to make you a bad guy that nobody has ever seen before,” and he gave me all the tools necessary to accomplish it. I think he’s a genius for that. What he did in creating these characters where all of them were compromised from the start was a beautiful, beautiful thing. There’s no good guy, there’s no bad guy in the movie. Everyone makes a crucial mistake in trying to make you pay for what you did yesterday with the resources of today.

Having seen “Dead Man Down,” I couldn’t agree with him more. Alphonse Hoyt is a bad guy, but he is also a very complex character who cannot be dismissed as a one-dimensional villain. Even the characters played by Colin Farrell and Noomi Rapace are in a morally gray area as they have suffered tragedies in their own lives and are out to get revenge in the worst way possible. Howard compared the characters to another movie he co-starred in.

TH: It’s like “Crash;” everyone was a bad guy somewhere along the way. Even Ryan Phillippe’s character, who was the good guy, ends up doing something terrible at the end of it. I think that’s what cinema’s about. it’s supposed to teach you about humanity and the choices that we’re making whether it’s good or bad, and the audience can watch and hopefully gain some type of understanding of how to place the stumbling blocks of yesterday in a way on the path that they become stepping stones for those that will follow us. We are all still one person even though we see each other as separate individuals.

During the interview, Howard made it very clear to us that Alphonse was not born a bad guy. While his character leads a life of crime, we come to understand he never meant to go down the dark path that he did. This may not make any of his deeds in “Dead Man Down” forgivable, but it helps us to understand where he came from. Howard talked about how he saw the character at length and how his own personal experiences came to inform his performance.

TH: He (Alphonse) wanted to fit into society. Now mind you, he was part of a disenfranchised social group as a young black man, and in being a light-skinned black man growing up in the 70’s, black people didn’t appreciate him and didn’t like him and white people didn’t like him. When I was a kid, I was called a no nation motherfucker because I couldn’t hang out with black people and I couldn’t hang out with white people, so I had to find some type of foundation within my own family group. When I went down to Brazil, I found my family because everybody looks like me there. My character just wants to be accepted; he wants to be respected. He’s like Michael Corleone who said, “I tell you within five years we are going to be complete and above board. Just give us those five years and all of the businesses are going to be respectable.” That’s what he’s hoping, but Michael Corleone was never able to achieve that because you cannot gain peace by creating problems for someone else.

It’s natural I suppose to assume Howard based his character on another crime lord or that he did research on kingpins from history, but he actually found inspirations from other surprising sources. Among them were a story by writer Khalil Gibran and the story of King Saul and of how he had been anointed to become the King of Israel but was later denied this honor.

TH: When King Saul thought too much of himself and began to break God’s laws, King Saul had the kingdom ripped away from him. Now instead of accepting that and repenting, he fought against the anointed of Jehovah in fighting David, and therefore he had this evil spirit that was always following him, and he knew that he was going to fall and lose his place. That’s a hard place to exist in. But then Khalil Gibran told this story about the criminal, and in the story of the criminal was a young man strong of body and nature who had gone and knocked on the doors to go to work, but people told him ‘well you need education’ and they closed the doors. So, he went to the schools and they said well, you need money, and therefore he went out to beg and they said you’re a strong man, you’re lazy. So, he ended up on the top of a mountain and he looks down and is angry in his heart, and at that moment a lightning bolt strikes a tree and this club falls on him. He’s angry at God and he raises a club and says, “I asked and it was not given. Now I shall take with the strength of my arm,” and he then descended into that city and became the most notorious criminal of all time. Then two years later, a new Amir took over the city and made him the chief of his army and they dominated and desolated that city, and Khalil Gibran made a beautiful commentary that “of good men do we turn criminals out of our inhumanity towards each other. So, it was a combination of those things and a little bit of King Ahab because he refused to take direction from Jehovah also. There’s a lot of people that made Alphonse.

There are rumors Howard is thinking about retiring from acting, and this is a surprise because he still looks like he has many great performances left to give. He did not say he was going to retire, but I quickly came to respect his reasons for why he is considering it. Howard did not set out to be an actor for fame, wealth and glory, but instead to better himself as a person.

TH: I had a conversation with Sidney Poitier where I asked him, are you gonna do another movie? And he said, “No I don’t want to do an impersonation of myself anymore.” I may have 10 years left in my life and I don’t want to waste it doing something I’ve done before. If I can’t learn from a character, if I’m just going in and taking from a bag of tricks and choices, I don’t want to do it. It’s pointless for me because I have to grow as a human being and I don’t want the safe road. If I wanted the safe road I would’ve stayed working as a chemical engineer for New York when I graduated college. If I wanted the safe road I would’ve stayed in Cleveland, Ohio and been a contractor. I think I have greater things that I can contribute to the world of education and science than just as an actor. Now acting pays a lot, but I feel like I’m walking on water for tips as an actor because I know how to do it. I want to achieve my purpose as a human being and the reason I was put on this planet, so I will follow the course. As a sperm, if I knew which way to go and knew how to do it, I wouldn’t have gotten there because I would’ve been bored with it. But because I didn’t know where I had to go and I had to trust my instincts, I beat a half billion of my own brothers and sisters and hijacked my mother’s body and Terrence Howard has come to be. I like following the river as it flows.

Well, here’s hoping Terrence Howard doesn’t retire from acting for a very long time. While there is no doubt as to how smart a human being he is and of how much he can give in other areas of life, he continues to give one great performance after another. Howard also infuses each role he takes on with a strong intelligence, and it was endlessly fascinating to hear him talk about the things he knows as well as his role in “Dead Man Down.”