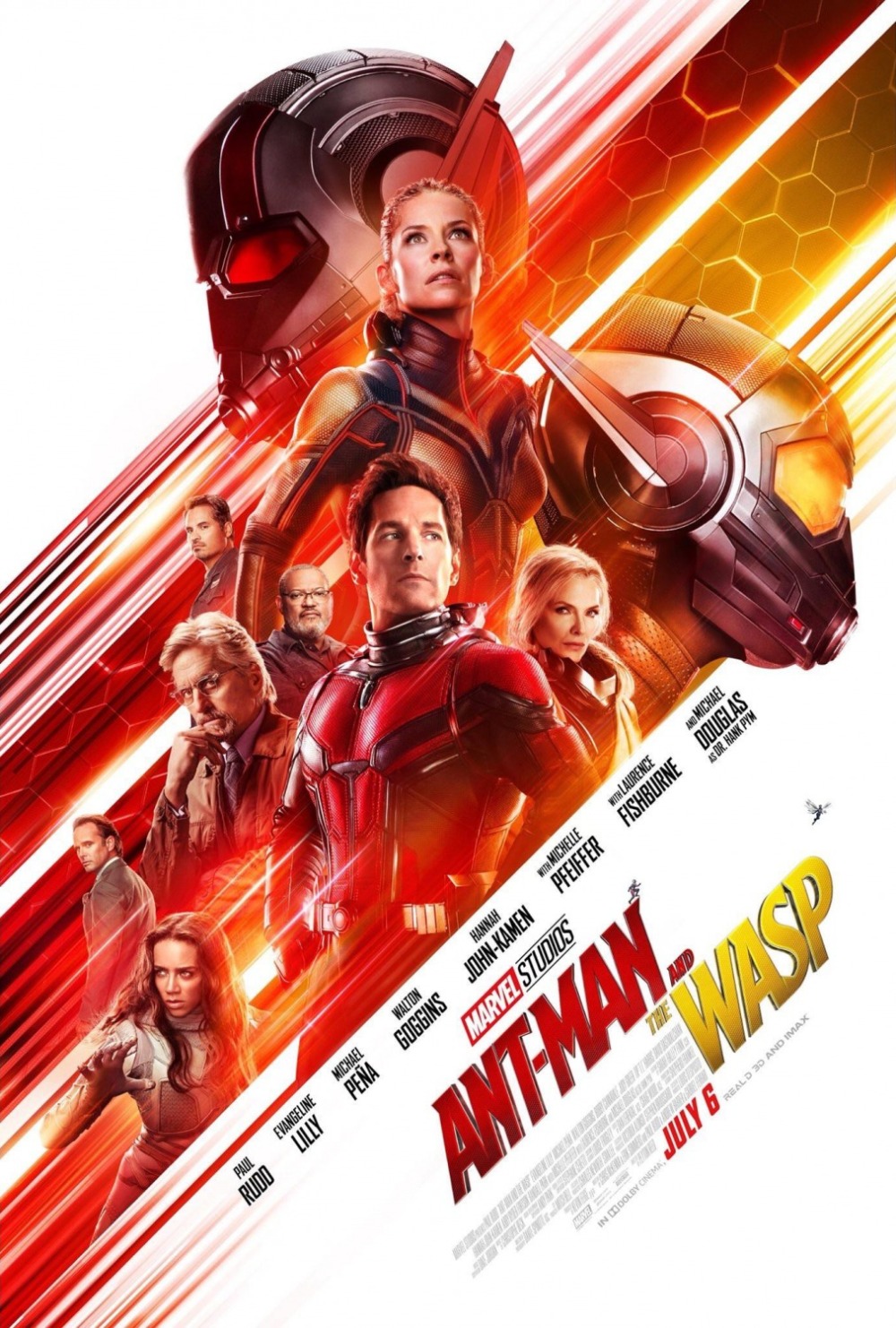 After the one-two punch of “Black Panther” and “Avengers: Infinity War,” I figured the masterminds behind the Marvel Cinematic Universe would give themselves a break for the rest of 2018. Even “Deadpool 2,” which features a Marvel Comics character  not a part of the MCU (not yet anyway), showed how dominant these comic book/superhero movies are no matter which studio puts them out. Surely, Marvel Studios and Disney would want to keep themselves from oversaturating the market, right?

Well, now we have “Ant-Man and the Wasp,” a sequel which proves to be one of the MCU’s more lightweight adventures. Whereas “Avengers: Infinity War” was the “Empire Strikes Back” of this infinitely popular franchise, this one has a simple aim which is to entertain you and leave you laughing hysterically. It could not have come at a better time as us movie buffs are still recovering from the damage Thanos wrought on our heroes, and this one is removed from his wrath as it is keen to pick up things following the events of “Captain America: Civil War.”

After helping out Captain America to where he violated the Sokovia Accords, Scott Lang/Ant-Man (Paul Rudd) has been placed under house arrest, and Hank Pym (Michael Douglas) and his daughter Hope van Dyne (Evangeline Lilly) have cut ties with him and gone into hiding. With only the occasional visit from his daughter Cassie (Abby Ryder Fortson) to keep to keep him company, his days are marked by loneliness and desperate attempts to keep himself entertained with various activities like drumming, karaoke and business meetings with his former cellmate and business partner Luis (Michael Pena).

As with any superhero movie, these characters have to deal with mommy and daddy issues because heaven forbid any superhero experiences a trauma-free childhood. It turns out Hope’s mother, Janet van Dyne (Michelle Pfeiffer) had partnered with Hank’s Ant-Man as the Wasp in the past, and she was later presumed dead after becoming trapped in the microscopic quantum realm after disabling a nuclear missile. Scott, however, receives a message from Janet who is still alive and, like Kevin Flynn in “Tron: Legacy” has long since been imprisoned in a realm which offers no easy escape. This forces him to team up with Hank and Hope, who is now the new Wasp, in an effort to rescue her, and it comes with the usual obstacles of bad guys and inescapable scientific facts.

The first thing I have to say about “Ant-Man and the Wasp” is how much I enjoyed the opening which has Scott going on a make-believe adventure with Cassie in his house as they have constructed a simple yet imaginative maze which they travel through with great enthusiasm. This scene reminded me of the wonderful imaginary worlds we created for ourselves as children, and it gets this sequel off to a terrific start as the filmmakers look to indulge in the same childlike imagination which they thankfully never outgrew.

The second thing worth pointing out is how this sequel is the first in the MCU to feature a female superhero in the movie’s title. While the DC Extended Universe can only catch up with the MCU in terms of quality and box office success, they are certainly ahead in terms of battling superhero sexism thanks to the brilliant “Wonder Woman.” It is only now Marvel is getting up to speed with the Wasp, and this is long overdue. It also helps how the Wasp is inhabited a pair of terrific actresses, Evangeline Lilly and Michelle Pfeiffer. Both provide this film with strong heroic characters who overcome their internal and external conflicts to make the world a better place for everyone including immigrants, legal and illegal.

Paul Rudd is one of the most likable dudes in the public eye right now, so it is hard to think of another actor who could inhabit Scott Lang to where we are more than willing to forgive his criminal trespasses. His wonderful sense of humor infects every scene to where he sneaks in jokes we do not see coming. Rudd also has a terrific moment where Scott’s body is inhabited by another, and it is almost as inspired as when Lilly Tomlin invaded Steve Martin’s body in “All of Me.” More power to you Mr. Rudd.

However, “Ant-Man and the Wasp” is almost stolen from Rudd by Michael Pena who returns as Luis. After suffering through the cinematic misfire which was “CHiPS,” Pena gets to use his comedic talents to much better effect here as he speeds through his dialogue with crazy energy while his character gets to experience what it is like to be a superhero with great glee. He is a riot here as he is forced to confess to a wide series of events under duress, and seeing him paint a vivid, if not entirely accurate account, of things past, provides this sequel with fantastic moments.

This time, Ant-Man and his companions have not one, but two antagonists to deal with. One is Ava Starr, a.k.a. Ghost, who has the power to phase through objects which was the result of being afflicted with molecular instability. Ava is played by Hannah John-Kamen who creates a complex portrait of a person whose affliction was not of her own doing, and as someone who acts out of desperation as her life, which has been filled with more pain than pleasure, looks to be cut short. While her goals conflict with those of Ant-Man and the Wasp, Kamen makes us see how Ava can be devilish as well as a victim of circumstances, and she gives a very strong performance as a result.

The other antagonist is Sonny Burch, a black market criminal eager to exploit Hank Pym’s technology for his own benefit. Sonny is played with great relish by Walton Goggins who has shown a flair for delivering dialogue with a special panache in Quentin Tarantino’s “Django Unchained” and “Inglorious Basterds.” Goggins brings this same flair to “Ant-Man and the Wasp,” and it is fascinating to watch his portrayal throughout. Even as Sonny fumbles about in his attempts to steal what does not belong to him, I could not take my eyes off of Goggins as he makes this villain into more than what he must have seemed like on paper.

Peyton Reed, who directed “Ant-Man,” returns to the director’s chair for this sequel, and I got the feeling he had a little more fun here. No long burdened by having to portray this superhero’s origin story or the inescapable question of how the first movie would have turned out had Edgar Wright not walked away from it, Reed gets to indulge his inner child with “Ant-Man and the Wasp” to where this sequel could almost pass for a children’s movie. Having said that, there is plenty for adults to enjoy as we watch these characters battle the bad guys and change the size of things and themselves to an amazing degree. Are there lapses in logic? Sure, but who cares?

Many in Hollywood like to talk about counterprogramming as studios are always carefully looking at when they can release the smaller indie movies in the wake of all these big budget blockbusters. In a sense, “Ant-Man and the Wasp” is Marvel’s way of counterprogramming against itself as it positions this sequel as an easy going alternative to “Avengers: Infinity War” and “Black Panther.” Whereas those two were among the biggest films in the MCU, this one is more like a nice rest stop where we can enjoy ourselves for a few hours and not worry too much about the other Avengers whose fates have yet to be permanently sealed. Some may consider this a disposable Marvel movie, but after ten years, it is clear how none of them can be the least bit disposable.

And yes, there are a couple of post-credit scenes, and if you are curious to see where this Marvel movie takes place in comparison to “Avengers: Infinity War,” one will answer this question in a way which will leave you with a great deal of anxiety. This anxiety ends up increasing with the movie’s coda which adds a question mark to the proceedings in the same way “Flash Gordon” did back in 1980. Yes, “Ant-Man and the Wasp” is designed to be a fun time at the multiplex, but it is in no position to leave any of these Avengers off the hook.