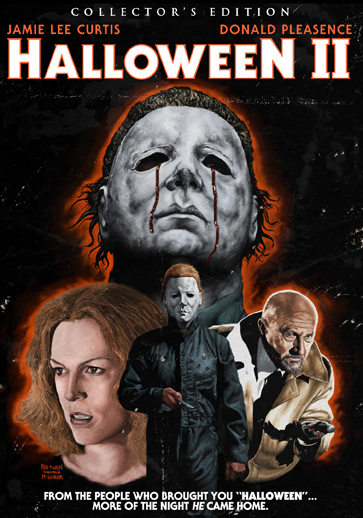 Universal Pictures first released 1981’s “Halloween II” on Blu-ray, and it was a release many horror fans had long awaited. But a year later, Shout Factory gave us another edition of this sequel, and it contained a lot of extras which were sorely missing from the Universal release: audio commentaries, a documentary on its making, deleted scenes, an alternate ending, trailers and TV spots among other goodies. This release also includes what the previous Universal Blu-ray controversially, and unforgivably, left out of the opening credits: “Moustapha Akkad Presents.”

Great care has been taken in this release’s packaging as it contains an excellent cover created by artist Nathan Thomas Milliner. This illustration has Michael Myers walking with that scalpel of his and crying tears of blood, Donald Pleasance holding out his hand which has Myers’ blood on it, and Jamie Lee Curtis looking as fierce as she did in the first “Halloween” movie. Looking at this cover should everyone an idea of just how big a cult following this sequel has more than 30 years after its theatrical release.

When comparing the look and sound of Shout Factory’s release to Universal’s, it’s hard to see much, if any, of a difference between them. Both versions make this sequel look better than it has in ages even though there is a bit of grain in certain scenes. But what this version does have which the Universal release lacked are two DTS-HD Master Audio tracks which include a 5.1 remix and a stereo mix.

This edition also contains two audio commentaries, and the first one is with “Halloween II’s” director Rick Rosenthal who is joined by actor Leo Rossi who played the chauvinistic ambulance driver Budd Scarlotti. Now this is an audio commentary fans have been dying to hear for the longest time, and Rosenthal provides a number of interesting tidbits throughout. Rossi himself is a delight as he talks about how Rosenthal went to bat for him when the late Debra Hill did not even want him in the movie. Hill was instead looking for Midwestern actors as the movie took place in Illinois, but Rosenthal managed to wear her down and get Rossi cast even though he looks and sounds like a New York native.

The other audio commentary is with stunt coordinator Dick Warlock who also played Michael Myers. Of the two commentary tracks, this one proved to be the most entertaining. There are a number of spots in the Rosenthal/Rossi where they both went silent and seemed unsure of what to say, but Warlock is full of details on how he went about playing Michael Myers and of how he handled some of the more dangerous stunts in the sequel.

We do also get a documentary entitled “The Nightmare Isn’t Over: The Making of ‘Halloween II'” which features interviews with Rosenthal, Warlock, Lance Guest, Rossi, Nancy Stephens and many others who were in front of or behind the camera. Like Rosenthal’s commentary, this is another special feature fans have been waiting for endlessly, and it does not disappoint. Some of the best anecdotes come from Rossi who explains how and why he changed the lyrics to “Amazing Grace” when he sang it, and Warlock makes clear why metal zippers do not belong on insulated clothing when you have been set on fire.

There is an additional DVD disc which contains the TV version of “Halloween II” on it, and this is the same version which has been shown on the A&E network. It features additional scenes not found in the theatrical cut as well as an alternate ending which shows one character to still be very much alive.

Other special features include an episode of “Horror’s Hallowed Grounds” which has host Sean Clark revisiting the original shooting locations of “Halloween II.” It’s surprising to see some of them still intact 30 years later. There’s also the theatrical trailer, television and radio spots, and deleted scenes with commentary from Rosenthal.

For those of you who still own the Universal Blu-ray release of “Halloween II,” you may not want to get rid of it just yet. The documentary “Terror in the Aisles” did not transfer over to the Shout Factory release, and it is unlikely you will see it available in its own release in the near future.

When Universal Pictures released its Blu-ray of “Halloween II,” it looked like we would never get a better version of it and had to be happy with what we got. Shout Factory, however, has given us a 2-disc set which has just about every special feature fans of this sequel could ever want, and it will certainly keep them busy for hours.

While it was ill-received upon its release in 1981 and considered a pale imitation of the original, “Halloween II” has long since gained a cult following as there are actually many things about it worth admiring. The look and feel of this sequel mirrors the original, and this was something the sequels which followed it could only dream of capturing.