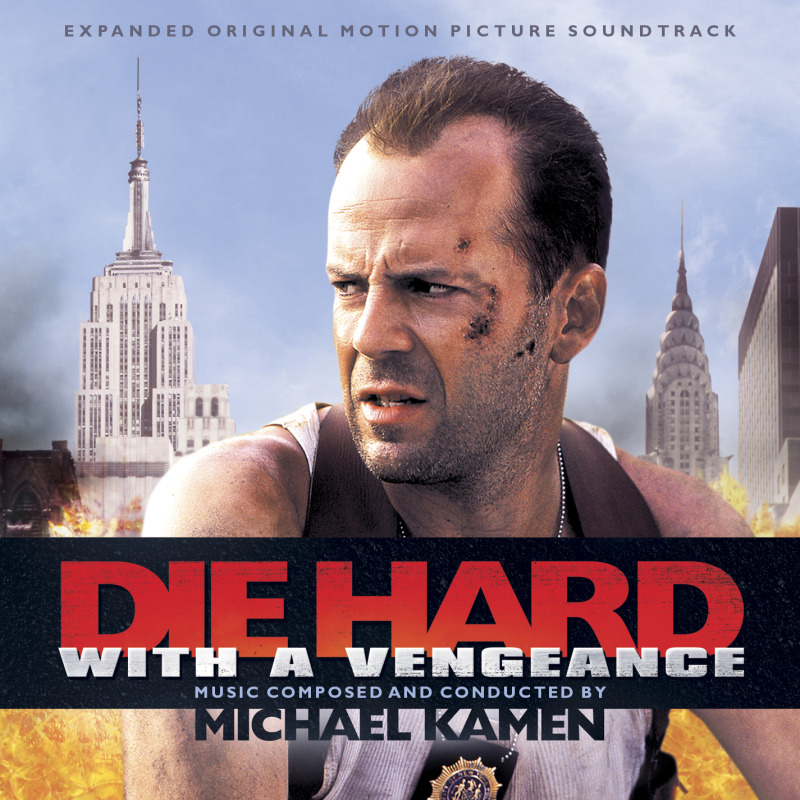 Anyone remember the RCA Victor release of the “Die Hard with a Vengeance” soundtrack back in 1995? That release was a joke and an unforgivable one as well. It did have some of Michael Kamen’s music score on it as well as a couple of rap songs which I’m not sure were in the movie, and some symphony pieces by Beethoven and Brahms which are not in this movie at all. It was as if RCA just wanted to throw any kind of soundtrack together so they could cash in on this sequel’s expected success, and what resulted was a travesty which any true soundtrack fan would be right to despise.

Well, it took over a decade, but La La Land Records has finally given “Die Hard with a Vengeance” not only the proper soundtrack release it deserves but an expanded one which contains two discs of music. In addition, it also comes with an informative booklet written by Jeff Bond who discusses how this “Die Hard” movie differs from the two which came before it, and it looks at how Kamen came to develop this particular score. But the great thing about this soundtrack release is it forces you to listen to Kamen’s music more closely in a way we didn’t previously.

When I first saw this sequel, I wondered if Kamen had actually bothered to create a new score for this “Die Hard” adventure. Many of the music cues sounded like they came from “Die Hard” and “Die Hard 2,” and it was hard to spot any new musical themes throughout. Listening to the La La Land Records release, however, makes you realize Kamen did not just simply throw something together. Much thought went into this particular score as it presents a somewhat darker John McClane (played by Bruce Willis) than what we have seen previously, and it also captures the joyful qualities of the heist movie that “Die Hard with a Vengeance” is meant to be.

Among the pieces of music I was thrilled to hear on this soundtrack is “Taxi Chase” which has McClane and Zeus Carver (played by Samuel L. Jackson) driving through a populated park in New York in an effort to catch a train before it explodes. “Taxi Chase” sounds unlike any music Kamen has previously composed for a movie with all its urban percussion. In the booklet, Bond quotes Kamen on this cue as it is one of the composer’s favorites which found its inspiration from his living in Manhattan.

“A lot of it (the movie) takes place on the streets I inhabited,” Kamen said. “I was trying to figure out what music to put there and I remembered that Needle Park is just up the street, and all you ever hear is bongo players and people driving past, and that’s why that cue is all native percussion. We’re using drums and drum loops and the normal accouterment of a modern recording studio – even a live drummer from time to time.”

This soundtrack not only contains music which was not on the original release, but also the music which was written for the movie but not included in it. Bond writes how director John McTiernan removed a number of Kamen’s cues from the movie, but Kamen wasn’t bothered by this too much because he was very collaborative and agreed with many of the changes McTiernan wanted to make.

And yes, The Lovin’ Spoonful’s “Summer in the City” which opens the movie is on this soundtrack as well, and it has never sounded better.

When it comes to these expanded soundtracks, I usually say how they have never looked or sounded better. With La La Land Records’ release of “Die Hard with a Vengeance” though, that’s a given as the original release was put together before Michael Kamen even had a chance to finish his score. While it may not have the same exhilarating or emotional sweep as his score for “Die Hard 2,” what Kamen has put together here is great and highly enjoyable to listen to. This release also forces you to realize Kamen was never out to just recycle his own work in the way the late James Horner was often accused of doing.

Sadly, this proved to be the last “Die Hard” movie Kamen scored before his death. Marco Beltrami later took over composing duties for “Live Free or Die Hard” and “A Good Day to Die Hard,” but the music Kamen created for these films will live on forever.

CLICK HERE TO FIND OUT HOW YOU CAN PURCHASE THE “DIE HARD WITH A VENGEANCE” EXPANDED SOUNDTRACK.