The fact that Clint Eastwood is still directing films at his age is nothing short of amazing.  When he is acting and directing them, it is even more impressive.  “The Mule” marks the first time he has directed and acted at the same time since 2008’s “Gran Torino,” so it’s been a while. He does not disappoint as the usual Eastwood touches are here.  He is a simple yet powerful filmmaker and actor.  He is not going to do a lot with the camera, but he trusts his actors, the writer, and he gives everyone them the space they need to tell the story.  It is what he has always done as a director.  He’s not a flashy filmmaker and he doesn’t need to be since he knows what works.

Eastwood stars as Earl Stone, a 90-year old horticulturist from Peoria, Illinois who is seeing the world changing rapidly thanks to the Internet. The film starts out in 2005 and he is winning awards at conventions and making friends left and right.  However, he has forgotten about his family in the process.  He is not on good terms with them and they feel neglected.  Early on in the film, they show him missing out on his daughter’s wedding.  His real-life daughter (Alison Eastwood) is in the film, which is a nice touch. 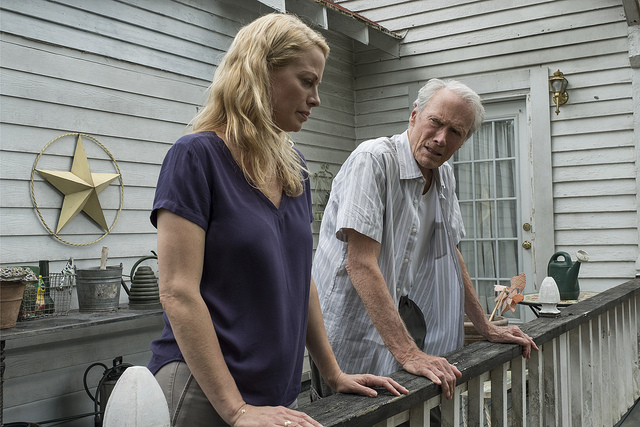 With the internet growing, Earl has now fallen on hard times.  When he shows up to visit his granddaughter at a brunch for her upcoming wedding, he notices his family has not forgiven him for putting work over family. He wants to make it up to them by pitching in for Ginny’s (Taissa Farmiga) upcoming wedding.  Someone approaches him at the brunch and informs him that all he has to do is drive and he can make a lot of money.  Driving is something he is very good at as he has driven in forty-one states and has never been pulled over or ever had a ticket.

Little does Earl know he will be driving for the cartel and carrying around some cocaine. Since he is such a good driver, and 90-years old, it seems like the perfect way for him to make some easy money and get back in the good graces of his family. At first, he only takes on one job and believes it will be enough to hold him over.  Before long, he is their top driver and highly thought of by the cartel.   However, two DEA agents played by Bradley Cooper and Michael Peña are trying to take down the cartel, and Earl may go down with them as well.

There is nothing here which is incredibly moving, profound, or earth shattering. The jokes about cell phone usage are a little overdone.  It is still very entertaining, however, and a very easy movie to watch. The film also features stellar performances from Laurence Fishburne, Dianne Wiest as Earl’s ex-wife, Richard Herd, Andy Garcia, and Clifton Collins Jr. Eastwood is the one leading the charge here, and he always plays it with his usual Eastwood calm, cool, and collected persona even when things get a little hairy.  He makes a decision and he sticks with it.

At 116 minutes, “The Mule” breezes by with humor, suspense, and tension.  At this rate, we don’t know how many more times Eastwood will be in front of the camera, and he is a Hollywood icon, so it’s always a treat.  I don’t see any upcoming films for him as a director/actor, and he is someone who should be cherished.  He still has it and will never lose it. I hope he lives forever and keeps making movies.  This is the kind of movie where you sit back, relax, and enjoy the ride Eastwood and company take you on for almost two hours.  It’s not great, but it’s still quite good.

Blu-Ray Info: “The Mule” is released on a two-disc Blu-Ray, DVD, and Digital Combo Pack from Warner Brothers Home Entertainment.  It has a running time of 116 minutes and is rated R for language throughout and brief sexuality/nudity.

The Making of The Mule: Nobody Runs Forever (10:59): Clint Eastwood talks about how it was different from other projects he had done in the past.  It was inspired by true events as well. The screenwriter of “Gran Torino” wrote this film, which makes total sense.  Eastwood gives great details about how he approached the character. Many of the main cast members chime in with their thoughts on the film and working with Eastwood.  They also go into detail on how Eastwood was big on getting all of the little things right in this movie.