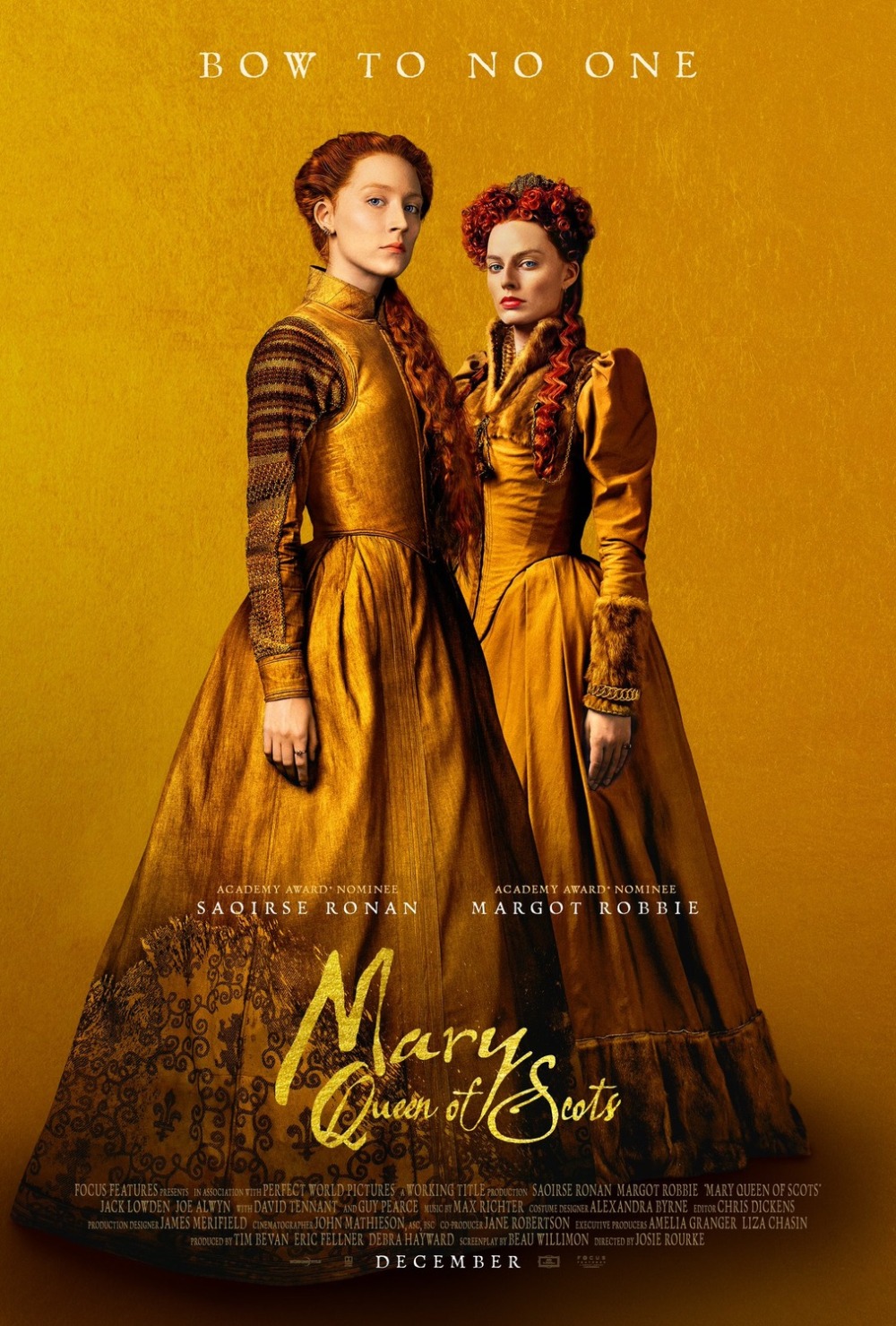 Many people, particularly on the movie’s IMDB page, have been bashing “Mary Queen of Scots” for failing to be historically accurate. But like many motion pictures which say or imply they are “based on a true story” or “inspired by true events,” this is another one which is not obliged to be restricted in its storytelling by mere facts. Indeed, this movie has been listed by the filmmakers as historical fiction which I am perfectly fine with as deals with two queens from centuries ago who had a respect for each other, but were also frightened by the other’s ability to wield power, and both had a lot of power at their disposal.

Based on the biography “Queen of Scots: The True Life of Mary Stuart” by John Guy, this movie starts off by showing Mary’s eventual fate, something we really didn’t need to see right away. Not that it spoils anything, but it is so brief to where its brief inclusion feels unnecessary.

From there, we see Mary Stuart (Saoirse Ronan), Queen of France, arriving in her native land of Scotland intent on reclaiming her throne there. But in this period of strife between Scotland and England, Queen Elizabeth I (Margot Robbie) holds powerful reign over both countries and is not in a hurry to surrender her power to anyone. Mary, however, sees herself more than a ruler by name, and she asserts herself in a way which threatens Elizabeth’s sovereignty and brings about a hot cauldron of rebellion and betrayal. Both women have a defiant appearance about them, but they will eventually find it difficult to keep their heads held high as treachery undoes their legacies in a way which will never be easy to repair.

“Mary Queen of Scots” gets off to a very slow start, and I found myself almost falling asleep. It is as though director Josie Rourke, the first woman ever appointed Artistic Director of the Donmar Warehouse, worked too hard to keep things from peaking at the story’s start. But once Ronan and Robbie make their presences known to us, this movie really hits its stride as both actresses inhabit their characters in ways both fearless and stunning as each proves they are more than ready to govern a country in a way Theresa May only thinks she can.

Ronan is exhilarating to watch throughout as she makes Mary Stuart into a bold ruler who will not suffer fools in the slightest, and seeing her stare down her most loyal servants, male and female, is truly a sight to behold. It’s like her eyes are spitting out daggers to where she has to say nothing in getting her point across. Just watch her scenes with Jack Lowden who plays Mary’s second husband, Lord Damley, who woos her in a way which would have earned this movie an NC-17 just a few years ago. But just as Lord Damley thinks he is the one in power, Mary emasculates him to where he is of little use other than impregnating her and giving an heir to the throne. Ronan stares Lowden down with what seems like little effort, and you have to give Lowden credit for playing a man who is so out of his depth in the monarchy.

Robbie came out of nowhere like a firebolt with her breakthrough performance in “The Wolf of Wall Street,” and she continues to wow us with one great performance after another in movies like “I, Tonya.” In this movie, she has an especially big challenge as Queen Elizabeth I is a historical character who has been played by many actresses over the years in various movies. We could spend our time comparing her performance to those given by Cate Blanchet and Dame Judi Dench among others, but n the end she more than makes this role her own. Even as she shows the power Elizabeth has all those around her, the actress is unafraid to show us this queen’s vulnerabilities which do not end with an almost deadly bout with smallpox. Seeing all those pox marks on her face succeeded in bringing back a lot of bad memories for me, and I have to give the makeup artists high praise as a result.

In real life, Mary and Elizabeth never met face to face, but the thought of them in a room together is highly intriguing. What would they talk about? Can’t they relate to one another in a way they cannot with others? The ideas abound, and what results here is a riveting scene between Ronan and Robbie as their characters strive to assert a power they see as being given to them without question. These two actresses do some of their best work yet here, and seeing them face off and hold their own results in one of the strongest pieces of acting I have seen in a 2018 movie.

Both Mary and Elizabeth respected and were frightened by one another. It’s tragic they could not become better friends as they were one and the same; female leaders who ruled in a time when the thought of a woman commanding such a power was something were too easily frightened by. The level of testosterone surrounding them did not stop them in their tracks, but it is clear how one queen fared better than the other.

“Mary Queen of Scots” thrives on the performances of Ronan and Robbie. The story is at times a bit hard to follow as the politics of the time are not always made clear, but things do improve as the movie goes on. Rourke does a strong job of bringing you right back to the year 1569, and there’s an excellent film score composed by Max Richter which heightens the visceral emotions on display. It’s also great to see actors like Guy Pearce and David Tennant sink so deep into their roles to where they almost completely unrecognizable. Of course, a lot of that is due to an abundance of hair they have on their bodies. What results is not quite a masterpiece, but a powerful motion picture which showcases the amazing talents of its two female leads even as takes liberties with history.

It’s sad to see things have not changed over time. Even now, female politicians still get done in by innuendos (a.k.a. fake news) about their records and accomplishments. But coming out of this movie, I’m fairly certain neither Mary or Elizabeth would have made the mistake of using a private email server in the same way Ivanka Trump did. Again, a lot of that is due to Ronan’s and Robbie’s powerful work.