“Blazing Saddles” is one of Mel Brooks’ funniest comedies and one which invites repeat viewings as there are always jokes still waiting to be discovered. It acts as a satire of the western genre as well as the racism which was obscured by Hollywood’s creation of myths regarding the American West. But as funny as it is, it also offers the viewer a moving story about a black sheriff who manages to win over a town on the verge of being taken over by murderers and thieves. It also gleefully breaks the rules to where places and people are added that were never really part of the American West in the first place.

The wonderful Harvey Korman plays Hedley Lamarr, the State Attorney General who wants to get his hands on the town of Rock Ridge where the land is worth millions. His attempts to frighten the people out of their town includes getting cowboys to ride in and shoot their guns, creating a havoc which makes everyone living there fearful and anxious. But when that doesn’t work, Lamarr comes up with what he believes is an ingenious idea; he hires a black man to become the new Sheriff of Rock Ridge with the belief his “mere presence” will scare everyone out of there. Of course, things do not go as planned.

Looking back at “Blazing Saddles” all these years later, it still stands up mainly because Brooks is not out to make the actors simply go for the joke. Instead they play many scenes straight instead of trying to be funny, and this makes the humor work even more than it already does. With a satire like this, it helps to have characters you care about regardless of how ridiculous their actions may be. Most movie satires and spoofs these days keep forgetting this as they are more persistent in selling the joke to the audience instead of giving the story any real substance.

The late Cleavon Little portrays Bart who becomes the Sheriff and immediately meets resistance to his presence because of the color of his skin. Regardless of how infinitely intelligent and cool he is compared to the idiotic residents of Rock Ridge, he has to work real hard to win them over. Little has so many inspired moments in the movie like when he sings a Cole Porter song instead of the “Camptown Races” which the racist cowboys assume blacks sing all the time.

Many may accuse “Blazing Saddles” of playing up black stereotypes in order to get easy laughs, but they completely miss the point. Brooks and his team of writers, which included Richard Pryor, turn those stereotypes upside down and expose them for the falsehoods they have always been. Seeing the residents of Rock Ridge overzealous reactions to Bart’s behavior, such as him saying “excuse me while I whip this out” when he takes out his written speech, are indicative of their overt racism more than anything else. Seeing them act so stupidly out of fear and sheer ignorance gives the movie some of its most side-splitting moments.

Another memorable performance comes from the great Gene Wilder who plays Jim, a.k.a. The Waco Kid, the fastest gun in the world. While Wilder is best remembered at times for playing neurotic characters, he is as cool as can be in this film. Seeing him play it so cool in moments where his precision with a pistol is stupidly questioned by others who don’t know him is so much fun to take in. His character is a riff on the one Dean Martin played in “Rio Bravo,” and Wilder is such a blast to watch throughout.

“Blazing Saddles” also provided the late Madeline Khan with one of her most famous roles, the German singer Lili von Shtupp whose name is inexplicably censored on the movie’s television version. She is endlessly brilliant in her rendition of the song “I’m Tired,” and it makes for one of the most unforgettable comic performances ever captured on film.

There are many unforgettably hysterical scenes throughout “Blazing Saddles” which stand up to repeat viewings. The campfire scene is as obscene as it is gut-bustlingly hilarious, and you may find yourself laughing harder than you ever have before. Brooks himself plays a couple of parts like the severely lacking in intelligence Gov. William J. Le Petomane and an Indian Chief who, for some bizarre reason, speaks Yiddish. Other actors like the great Slim Pickens and Burton Gilliam have us gasping with laughter just by looking at the befuddled expressions on their faces.

Along with a great music score by John Morris and beautiful cinematography by Joseph F. Biroc, “Blazing Saddles” has more than earned its place on the list of greatest comedies ever made. There is tremendous delight in watching Brooks throw caution and logic to the wind as he throws in the unexpected like Count Basie and his orchestra performing in the desert while Bart rides by, or having Nazis sign up for Lamar’s final battle at Rock Ridge. It doesn’t matter if it makes sense or because you just want the laughs to keep on coming (and they do). With a comedy like this, you can never be sure what will happen next!

By the way, be sure to watch “Blazing Saddles” in the widescreen version. Brooks shot the movie in Panavision scope, and it has never ever translated well to the realm of pan-and-scan. 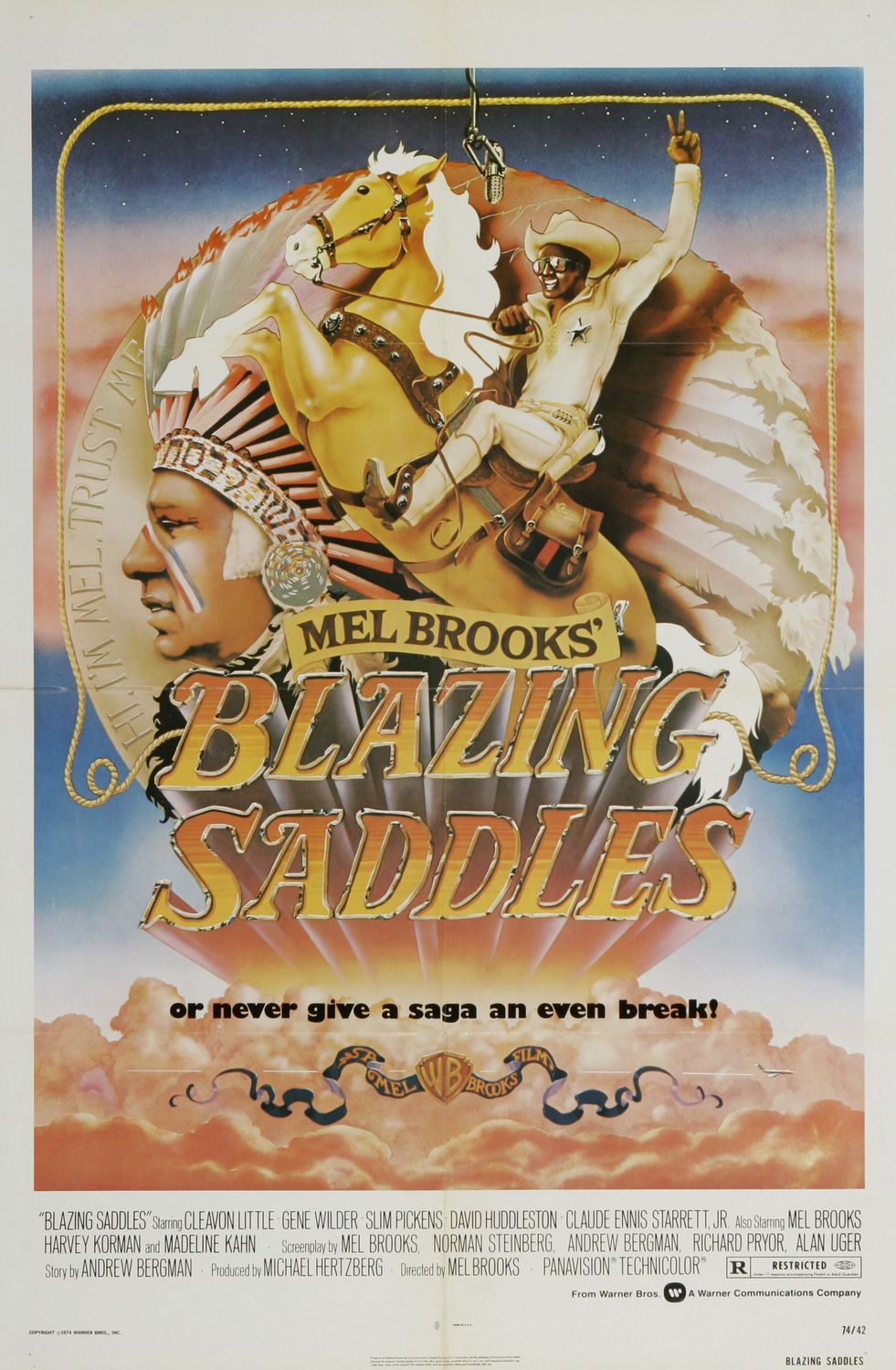