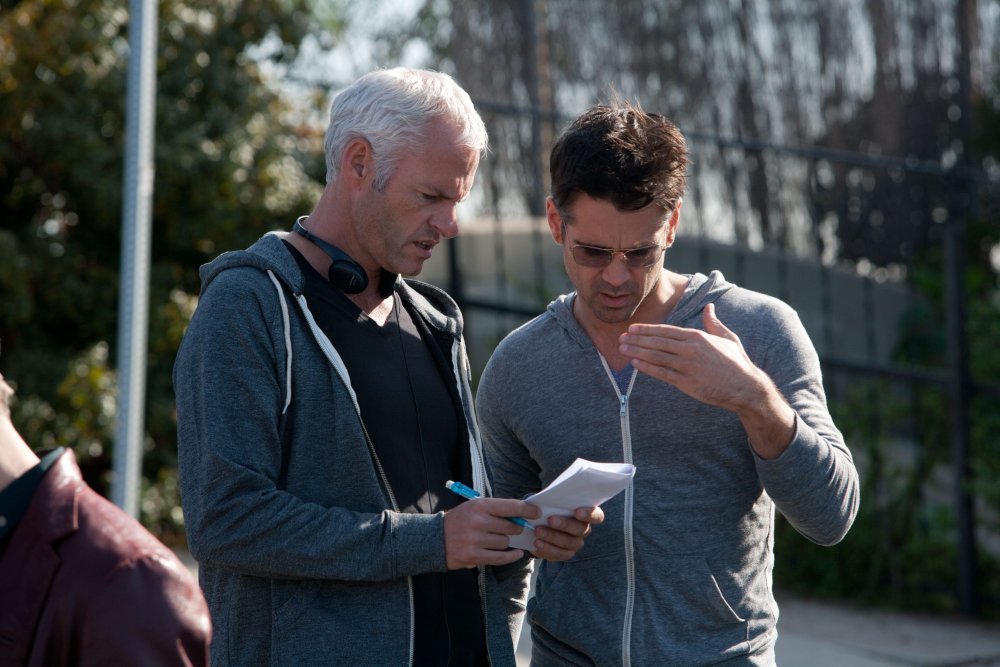 WRITER’S NOTE: This article was written back in 2012 when this screening took place.

Playwright and filmmaker Martin McDonagh dropped by Arclight Cinemas in Hollywood for a Q&A about his movie “Seven Psychopaths.” It features a terrific ensemble cast which includes Colin Farrell, Sam Rockwell, Christopher Walken, Woody Harrelson, Abbie Cornish, Tom Waits and Olga Kurylenko, and it follows the exploits of a writer who is desperate to finish his screenplay even as his friends inadvertently get him involved in the kidnapping of a gangster’s beloved dog.

“Seven Psychopaths” is McDonagh’s follow up to his brilliant movie “In Bruges,” but it turns out he wrote the script for it after he finished writing “In Bruges.” He explained he made “In Bruges” first because the script for “Seven Psychopaths” had a “canvas that was way too big for a first-time filmmaker.” This movie certainly has a lot of layers as it deals with multiple characters and storylines, and many of the characters have more to reveal about themselves than we realize at first glance.

The evening’s moderator said she once heard how McDonagh had admired Christopher Walken as a child, and McDonagh said he felt we all did as much as we respected Harry Dean Stanton (who has a cameo in the movie) or Tom Waits. It also turns out this was not the first time McDonagh had worked with Walken on a project.

Martin McDonagh: I did a play in New York with Christopher and Sam Rockwell about three years ago (“A Behanding in Spokane”), so I had that in. It was a dream come true to have Chris on set and doing his stuff.

McDonagh recalled the atmosphere on the set of “Seven Psychopaths” as being “strangely a lot of fun,” and the audience at Arclight Hollywood could certainly sense all the fun this cast of actors had. When asked if there was any improvisation, he said everyone pretty much stuck to the screenplay despite some exceptions.

MD: There were some little bits at the end of the shootout sequence in the graveyard, but everything else was on the page. The actors were so good that they made every line seem like they had come up with it on the spot. I think that’s the secret of truthful acting; to make it seem like it’s all improvised.

The dog playing Bonny was a Shih Tzu who is also named Bonny in real life, and McDonagh was great in describing how this one got cast.

MD: There were four or five Shih Tzus that came in to the casting couch. Bonny seemed more kind of edgy and the others were all ribbons and shampooed. Bonny felt like early De Niro.

McDonagh also made it clear if he knew the possibility of all those puns which made it into the movie’s advertisements like “they won’t take any Shih Tzu,” he would have gone with a German Shepherd instead. But it came down to deciding what would be the most incongruous dog for Harrelson’s gangster character to have, and Shih Tzus are so irresistibly cute. Bonny was apparently very sweet to work with, and the cast, especially Walken, spoiled the dog like crazy.

The main character played by Farrell is a writer named Marty Faranan, and Faranan is McDonagh’s middle name. However, aside from the middle name and the alcoholism, McDonagh claimed there are no connections between him and this character. McDonagh did however say what Marty wanted to accomplish with his script is the same thing he wanted to accomplish with this movie.

MD: The speech that Marty has at the start about wanting to make a film called “Seven Psychopaths” but still wanting it to be about love and peace is kind of where I was coming from. It’s really about friendship and for searching for something beyond movies about guys with guns. At the same time, it was a crazy guys with guns violent movie.

One of the best things about “Seven Psychopaths” is how it satirizes action movies and the clichés which continue to overrun them. The moderator talked of how there are certain conventions in them which seem to imply how you cannot kill a dog but that you can kill a woman, and McDonagh freely admitted he is constantly rankled by them as much he is from the notes he gets from studio executives.

MD: When you have a character putting a gun to a dog’s head you get a thousand notes about that, but not one about shooting someone in the stomach. Not one.

In terms of his cinematic influences, McDonagh cited the films of Sam Peckinpah and Terence Malick as being major ones on his cinematic work. When it comes to “Seven Psychopaths” however, he admitted Peckinpah was definitely the bigger influence. Other filmmakers whom he looks up to include Akira Kurosawa who made the classic “Seven Samurai,” Martin Scorsese whose film “Mean Streets” was a big influence on this film, Preston Sturges who made screwball comedies like “The Lady Eve,” and Billy Wilder whose darkly comic and satirical films he admires. Clearly, McDonagh is more influenced by old school filmmaking than he is by current mainstream entertainment

Martin McDonagh has more than earned his place among the greatest and most inspired playwrights working today, and his work as a filmmaker keeps getting better and better. “Seven Psychopaths” is a very clever movie which deserves a big audience, and it was great to see him take the time to come down to Arclight Hollywood to talk about its making.