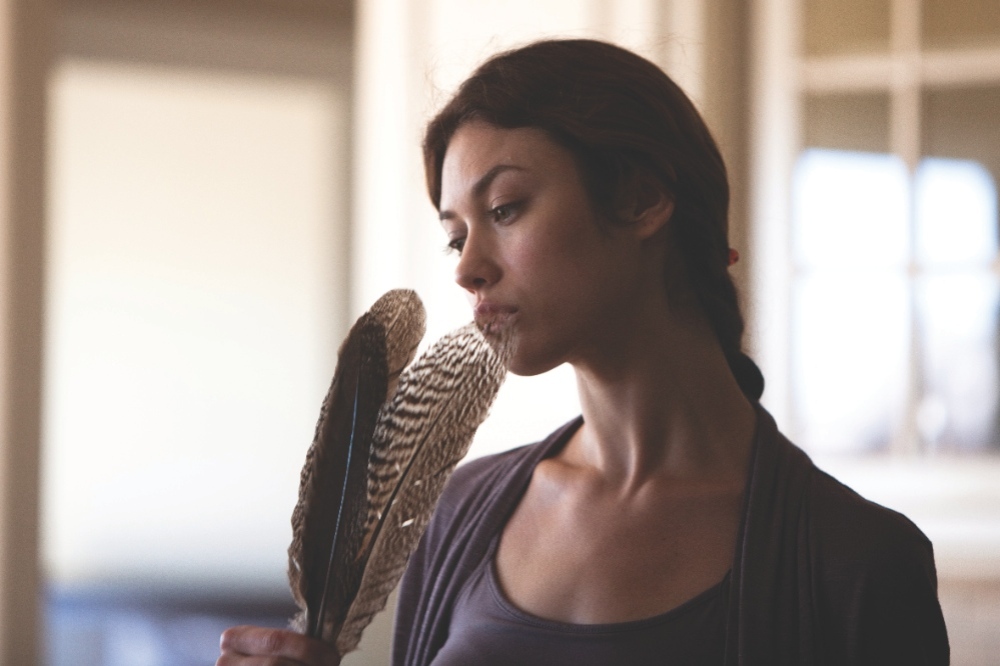 WRITER’S NOTE: This article was written in 2013.

While former Bond woman Olga Kurylenko gave a compelling performance in “Oblivion,” she gives an even greater one in Terrence Malick’s “To the Wonder.” As Marina, a European woman who moves with her American boyfriend Neil (Ben Affleck) to Oklahoma, she is fascinating to watch as she goes from being deliriously happy in love to becoming emotionally devastated when their relationship turns sour. Seeing her dance her way through a sterile drug store to becoming so upset at how bad things get makes you see what she is capable of as an actress.

Going from a big budget science fiction film like “Oblivion” to a low budget “art film” like “To the Wonder” was clearly a study in contrasts for Kurylenko, and she joked about how she at least had a trailer on the set of “Oblivion.” She went out of her way to discuss the differences between the two films to Sheila Roberts of Collider while at the “Oblivion” press conference, and it’s one of the few instances where we get a good look at how the secretive and elusive Malick works with his actors.

“It was very different. They couldn’t be further apart from each other,” Kurylenko said of “Oblivion” and “To the Wonder.” “In Malick’s film, for example, there was no script and that’s the difference. Here, with ‘Oblivion,’ the script was very detailed and very precise. The way Malick worked with us, he never rehearsed, and he was actually against any rehearsal.”

“Malick just throws actors in, but there is a backstory and again lots of conversations,” Kurylenko continued. “The way I built my character was by talking with Terrence all the time. We just spoke, spoke, spoke. I had a little homework to do before I started the movie. I had to read three Russian novels: ‘Anna Karenina,’ ‘The Idiot’ and ‘The Brothers Karamazov.’ Those are very tiny little novels (laughs). After that, I didn’t really need to read a screenplay. We just spoke. There were discussions about what I drew from the books, how we can compose the character, what similarities there are between Marina and different female characters in those books, and that’s how the character was born. It was a mixture of Dostoyevsky, Tolstoy and Terrence Malick.”

Kurylenko describes working with Malick on “To the Wonder” in even greater detail in an article she wrote which appears on the Black Book website. In the article, she makes her experience seem incredibly vivid as she describes how free spirited she became while on set. Once she and Malick had their discussions about the character, he let her run wild and encouraged her to find that elusive thing he called “the Wonder.” What is “the Wonder?” Well it sounds like the deep fascination we have with the ways of nature, and we constantly lose our fascination with that in our busy lives and continued dependence on technology. Anyway, from what Kurylenko wrote, it sounds like she was both eager and ever so desperate to find it.

“Terry smiles and I jump, twirl, run, and jump again,” Kurylenko wrote. “He claps, ‘more, more, more, like a rabbit!’ But then the Wonder suddenly goes missing. I scream and run into the house-throwing things, breaking things. It rains pretzels and cereal and there are more screams, but now they’re not mine, they’re Neil’s, and I’m laughing wildly and crying-my Marina is hysterical, unstable. I collapse on the floor and I wipe my tears from his shoes and kiss them. I ask, ‘Why do I do this? I want to be good, so good, but sometimes I suddenly feel possessed.’ And I beg forgiveness.”

“I receive pages every morning, sometimes ten, sometimes more,” Kurylenko continued. “They’re not exactly a script. Whether one exists or not is a complete mystery, but the words are (excuse my poeticism) rather like a breakfast for the soul. And every morning it’s a feast! If I digest the sense of what the pages contain, the nature of Terry’s words will shine through my eyes while we’re filming, and I won’t even need to speak. Every sentence is filled with such deep knowledge of the soul.”

One great thing I learned while looking into the making of “To the Wonder” was how Kurylenko always stayed in character even when the cameras were not rolling. Some actors believe their work stops when they have no lines of dialogue to speak or when the camera isn’t focusing on them, but any great acting teacher will tell you your work never stops even when the day is done. Kurylenko understands this perfectly, and she told Liz Braun of The Toronto Sun how this made “To the Wonder” more physically challenging for her than “Oblivion.”

“It was exhausting, because I was the character even when the camera didn’t film me — you have to be with Terrence because you never know when he’s filming you, and he doesn’t like rehearsals,” Kurylenko told Braun. “Terrence is someone I utterly admire and love. I trusted him completely, because he made me do somewhat ridiculous stuff. I never said no. I did everything, and I was dancing, moving through nature, walking constantly.”

While it may seem inconvenient for Olga Kurylenko to have two movies out at the same time as one might bury the other at the box office, the upside is both of them show the range she has as an actress. We cannot deny Kurylenko is a very talented actress, and it will be interesting to see where her career goes from here. Her role in “To the Wonder” might be a once in a lifetime opportunity, but hopefully more of those opportunities will come her way very soon.

Olga Kurylenko, “Olga Kurylenko on Terrence Malick and Filming ‘To the Wonder’-In Her Own Words,” Black Book, April 11, 2013.