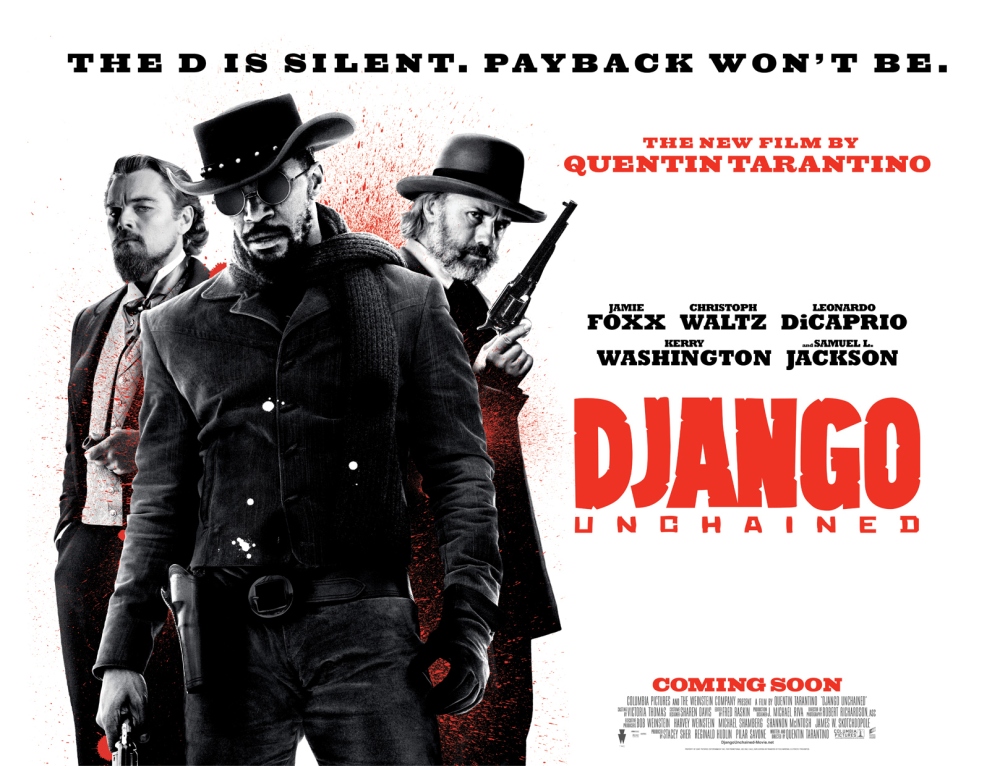 WRITER’S NOTE: This article was originally back in 2012.

I was lucky enough to check out Quentin Tarantino’s latest movie “Django Unchained” at New Beverly Cinema, the same movie theater he bought and kept from going out of business. It was being shown in 35mm instead of a digital print at other theaters because Tarantino is still a big fan of film, and the New Beverly is known for showing movies in 35mm because that’s exactly what the owners and patrons like best.

One of the real treats of seeing “Django Unchained” at New Beverly Cinema is instead of getting coming attractions for 2013 movies, we instead get to watch movie trailers from the past. These ones were especially campy and represent the kind of movies Hollywood no longer makes, and I wondered if the trailers being shown before “Django Unchained” inspired this particular Tarantino film in some way. Many of the prints of movies and trailers shown at the New Beverly tend to come from Tarantino’s own personal collection, so even if they didn’t inspire this movie of his, then they must have been ones he loves watching over and over.

This exploitation film from 1974, one which clearly was inspired by “Spartacus,” stars Pam Grier and Margaret Markov as female gladiators who have been enslaved in Rome and are forced to fight for their freedom. The trailer proved to be hilarious as the acting is over the top, and the narrator embellishes the more explicit elements of this movie by saying how the Romans “enslaved the most sensuous women to titillate the perverted pleasures of the Roman public” and how the main characters are “beautiful unchained women” whose bodies are “shaped into superb fighting equipment.” There’s also a bit of nudity and blood on display, the kinds of things you almost never see in a movie trailer today unless it is a red band trailer being shown for restricted audiences only.

Still, it’s great to see Grier here whom Tarantino cast in his movie “Jackie Brown,” and it is said she and Markov did all their own fights and stunts in “The Arena.” We should all known by now that Grier is as tough as the characters she has played in dozens of movies, and seeing her take on the Romans makes this one worth a look. 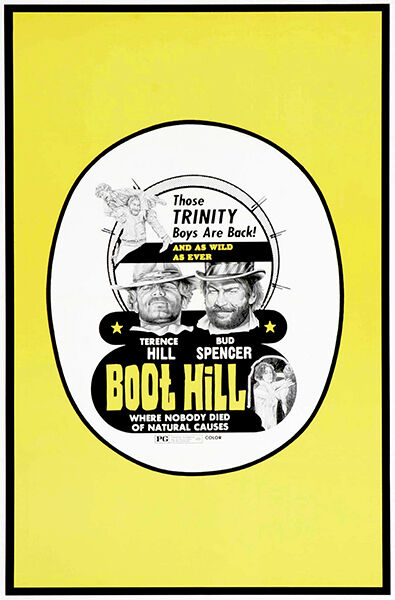 The trailer for this 1969 Italian Spaghetti Western runs four minutes long, much longer than the average movie trailer we see in theaters today. It stars Terence Hill as Cat Stevens, but the trailer’s narrator refers to him as “the man with no name.” It also stars football great Woody Strode as Thomas, a man who is quick with a gun and out for revenge over the death of his son. Together, these two help the inhabitants of a gold mining community which is being oppressed by a criminal organization.

This is another trailer which has a male narrator emphasizing the movie’s violence, and it’s fun to hear him say how “Boot Hill” is a town “where death comes quick,” “where death comes hard,” and where “death comes in two colors.” Seeing Hill and Strode walk into town all serious and without a smile on their faces brings to mind how Jamie Foxx and Christoph Waltz roll into town in “Django Unchained.”

“Boot Hill” was actually the last film in a trilogy of movies directed by Giuseppe Colizzi, and it was preceded by “God Forgives… I Don’t!” and “Aces High.”

This 1975 film was based on the best-selling novel of the same name by Kyle Onstott, and it stars James Mason, Susan George, Perry King, Lillian Hayman, former boxer Ken Norton and pro-wrestler Earl Maynard. It takes place in the 1840’s where a plantation owner trains one of his slaves to be a bare-knuckle fighter, and there are some brutal scenes of bare-knuckle fighting to be found in “Django Unchained.” It makes me wonder if Tarantino based the character of Calvin Candie (played by Leonardo DiCaprio) on the ones played by Mason or King in “Mandingo.”

The narrator of this trailer describes “Mandingo” as being “the first true motion picture epic of the Old South,” but it’s a little hard to believe this as certain scenes appear to be very overwrought. The audience couldn’t help but laugh at the actress who told her lover “don’t kiss me yet, unless it’s just a cousin kiss” because the kiss which followed seems to be anything but a cousin kiss.

The movie version of “Mandingo” received a severe bashing from film critics like Roger Ebert, Leonard Maltin and Richard Schickel, all of whom gave it their lowest rating. Tarantino, however, said it represents one of only two instances in the last few decades where “a major studio made a full-on, gigantic, big-budget exploitation movie” (the other being Paul Verhoeven’s “Showgirls”).

Ralph Nelson’s 1970 movie stars another football great, Jim Brown, as Jimmy Price, a black police officer who has just been elected sheriff of a racially divided town in the American South. The fact he beat out the former Sheriff, a white man named John Little (George Kennedy), does not sit well with some of the townspeople. As the movie’s title and the endless ticking in the trailer indicates, the racial tensions will continue to rise until they boil over into a possibly fatal conflict.

“…tick…tick…tick…” has long since become a cult classic for its cutting-edge portrayal of racial tensions and its tense narrative, and of all the trailers shown before “Django Unchained” at New Beverly Cinema, this was the one the audience laughed at the least, if at all. It looks like it still holds up to this day regardless of the passing of time, and the way the white characters treat Jimmy doesn’t seem much different from the way Django is treated in “Django Unchained.” It’s especially cool to see Brown as a Sheriff because he has always had the appearance of someone who can clean up a town single-handedly.

This Western from 1975 also stars Jim Brown as Pike, a rugged trail boss and former criminal who promises Bob Morgan (Dana Andrews) he will successfully transport $86,000 across the border to a ranch in Sonora, Mexico. Pike is forced to team up with a dishonest gambler named Tyree (Fred Williamson) for this mission, and they are soon being pursued by the ruthless bounty hunter Kiefer (Lee Van Cleef) and the corrupt sheriff Kane (Barry Sullivan).

The trailer for “Take a Hard Ride” made it look like a movie I really want to check out. Like “Django Unchained,” it is a mix up of the Blaxploitation and western genres and features one of the best casts a movie like this could ever hope to have. Brown and Williamson have always proven to be ultimate bad asses in whatever movies they appear in, and I love how the trailer’s narrator describes Cleef’s character as being “as sly as a rattlesnake and twice as deadly.” It was also great watching the scene where the cowboys and their horses crash down a hill because now I know where the filmmakers of “Young Guns II” got the idea for a similar scene.

After watching all these trailers and “Django Unchained,” it becomes clearer to see where Tarantino took his cues from as a writer and director. It also shows how brilliant he is at taking all the elements and turning them into a movie which is uniquely his own and not just an uninspired homage that pales in comparison to the films it inspired. “Django Unchained” proved to be a lot of fun, and the trailers which preceded it are for movies which look to be just as entertaining.