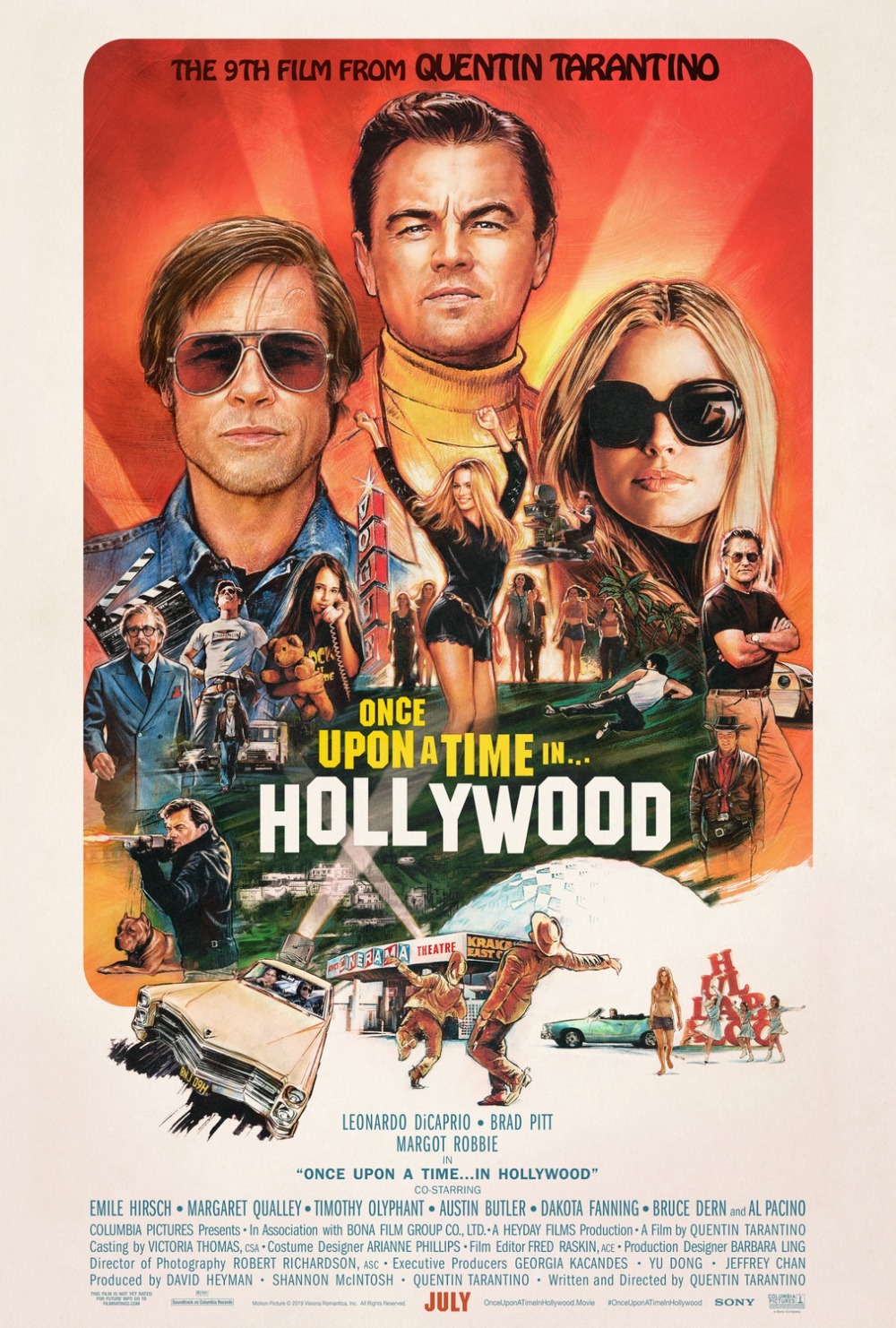 Quentin Tarantino once said he did not have an “Age of Innocence” in him like Martin Scorsese did, but after watching his 9th film “Once Upon a Time in… Hollywood,” I think he may be mistaken. Yes, it does have an R-rating like and features some truly brutal moments of violence where faces are literally pounded in, but this is largely a loving tribute to the Hollywood of the 1960’s and of the actors and filmmakers which inhabited it. Considering Tarantino’s attention to detail and his fetish for any kind of artifact from this era, I have no doubt he would have loved to have been a filmmaker back then if he could.

Tarantino and his longtime cinematographer Robert Richardson transport us back to the Hollywood of 1969 where we meet Rick Dalton (Leonardo DiCaprio), an actor and former star of a “Wanted Dead or Alive”-like television series called “Bounty Law.” After having a conversation with his agent Marvin Schwarzs (Al Pacino, more restrained than usual), he comes to see how washed up his career has become as he is reduced to doing guest spots as the villain on various television shows. The only person he can talk to about his troubles is his best friend and stunt double Cliff Booth (Brad Pitt) who is always around to have a drink with and drive him around town as Rick has had one DUI too many.

“Once Upon a Time in… Hollywood” is kind of like a Robert Altman film in that it doesn’t have a straightforward plot. Instead, it acts as a day in the life story as we watch Rick Dalton try to move on with his acting career as an important decision hangs over him, whether or not to move to Italy where he can star in low budget spaghetti westerns. When the story isn’t focused on him, it focuses on Cliff who seems content to live in a trailer out in Van Nuys with his dog who is a bit annoyed at him for serving him the kind of dog food which slides out of its steel can as if it were pure slime.

The only thing Rick seems fairly excited about these days is the fact Roman Polanski and Sharon Tate now live next door to him in the Hollywood Hills. But looming in the background is Charlie Manson and his cult of followers who look at first to be harmless hippies, but they later reveal themselves to be devoted to him in a most unhealthy way. Those of us who are familiar with history, and who have a deep respect for historical facts, know Sharon Tate and others were murdered by Manson’s followers, and that this shocking act all but ended the era of love and peace irreparably. But as I watched this film, I began to wonder if Tarantino would stay true to history, or if he would play around with it as he did in “Inglourious Basterds.” Whatever the case, the presence of Manson and his cult cast an ominous shadow over the proceedings, so we know the end of this story will not be the least bit pretty.

Watching “Once Upon a Time in Hollywood” reminded me of how much I love it when a filmmaker sucks us right into another time and place to where we don’t doubt the accuracy and attention to detail. Cameron Crowe did this with “Almost Famous,” Paul Thomas Anderson did wonders with the 70’s and 80’s in “Boogie Nights,” and Tarantino does the same as he brings us right back to 1969 with wonderful abandon. All the famous landmarks of Hollywood are here including the Cinerama Dome, Musso & Frank Grill, El Coyote Restaurant and the classic movie theaters located in Westwood. New Beverly Cinema can be seen from a distance as it is shown having a premiere for an adult film, and this was back when it was a porno theater.

This attention to detail also includes the kind of beer these characters drank, the type of books they read, television antennas and cars. This was back in a time when people smoked an endless number of cigarettes, drove and sat in cars without having to wear seatbelts, and when love and peace was in the air even as wars were being waged overseas.

It is great fun to see DiCaprio in this kind of role after seeing him be so serious in “The Revenant,” a movie which earned him the Oscar he should have received for “The Wolf of Wall Street.” He’s a gas here as he makes Rick Dalton into a study of desperation as he struggles to maintain what’s left of his image and berate himself while alone in his trailer. The scene he has with a child actress played by the wonderful Julia Butters is a special highlight as she shows him the kind of innocence and love of acting he once had before life, alcohol and a corrupted world view clouded his perception.

As I have said in the past, I love it when Pitt gets down and dirty in a role, and he does just this as Cliff Booth. In addition to being Rick’s stunt double, he is also a Vietnam veteran, and the violence he inflicts on others who wrong him can be described at the very least as punishing. Pitt also proves to be as funny as DiCaprio from scene to scene, and he has a classic scene opposite Mike Moh who is pitch perfect as Bruce Lee in which I saw something I never thought I would see or believe, someone getting the best of Bruce Lee.

But one performance I really need to single out here is Margot Robbie’s as Sharon Tate. While at the Cannes Film Festival, someone asked Tarantino why he didn’t give Robbie the same amount of dialogue he gave DiCaprio and Pitt. I don’t remember who asked this question, but whoever it was, they completely missed the point. It’s not always dialogue which aids a performance. Sometimes it’s just a look or an attitude, and Robbie gives off a look or two which is more than enough to capture the essence of Sharon Tate as well as her beguiling innocence.

Tate has long been relegated to history as one of the Manson family’s murder victims, but she deserves to be known for much more. As Robbie sits in a Westwood movie theater watching a movie Tate co-starred in, we are reminded of a talent which was taken away from this world far too soon, and it makes me want to check out everything Tate ever appeared in. Robie does a fantastic job of reminding us how fun it is to see ourselves, let alone our name, on the silver screen as others look on, unaware of who is sitting next to them in the audience, and she is as radiant as Tate was in her far too brief lifetime.

There are so many familiar actors worth singling out here, but some of them you may not see coming and I am not about to spoil any surprises this film has to offer. I will say it’s always a delight to see Kurt Russell in anything and everything, and he is great as a stunt coordinator who is not quick to warm up to Cliff. Margaret Qualley is a memorable presence as Pussycat, a member of the Manson family who does warm up to Cliff. Bruce Dern, in a role originally meant for the late Burt Reynolds, is fun to watch as George Spahn, a man whose ranch was used for many westerns and which later got used by Charlie Manson and his demented followers. And it is quite bittersweet to see the late Luke Perry as it is the last feature film he will ever appear in.

Seriously, as rough and tumble as “Once Upon a Time in Hollywood” gets, it really is a love letter to a Hollywood which time will never forget. As Tarantino nears the end of his long filmmaking career (or so he says), he continues to give us one enthralling motion picture experience after another. Even if his works threaten to be undone by self-indulgence, I am glad people are thoughtful enough to give him the freedom to make what he wants to make. If Tarantino ever had it in him to give us a fairy tale, this would be it. Even as its main characters threaten to be forever swallowed up by bitterness and cynicism, there is a light of innocence which helps lead them to the next stage in their lives. And if this film is any indication, this is time in Hollywood which Tarantino wishes lasted longer than it did.

Now, as with any Tarantino film, I have to go out and buy the soundtrack and then watch it again. And one other thing, I almost didn’t recognize Timothy Olyphant. Did you? Oh yeah, and sauerkraut will never be the same.