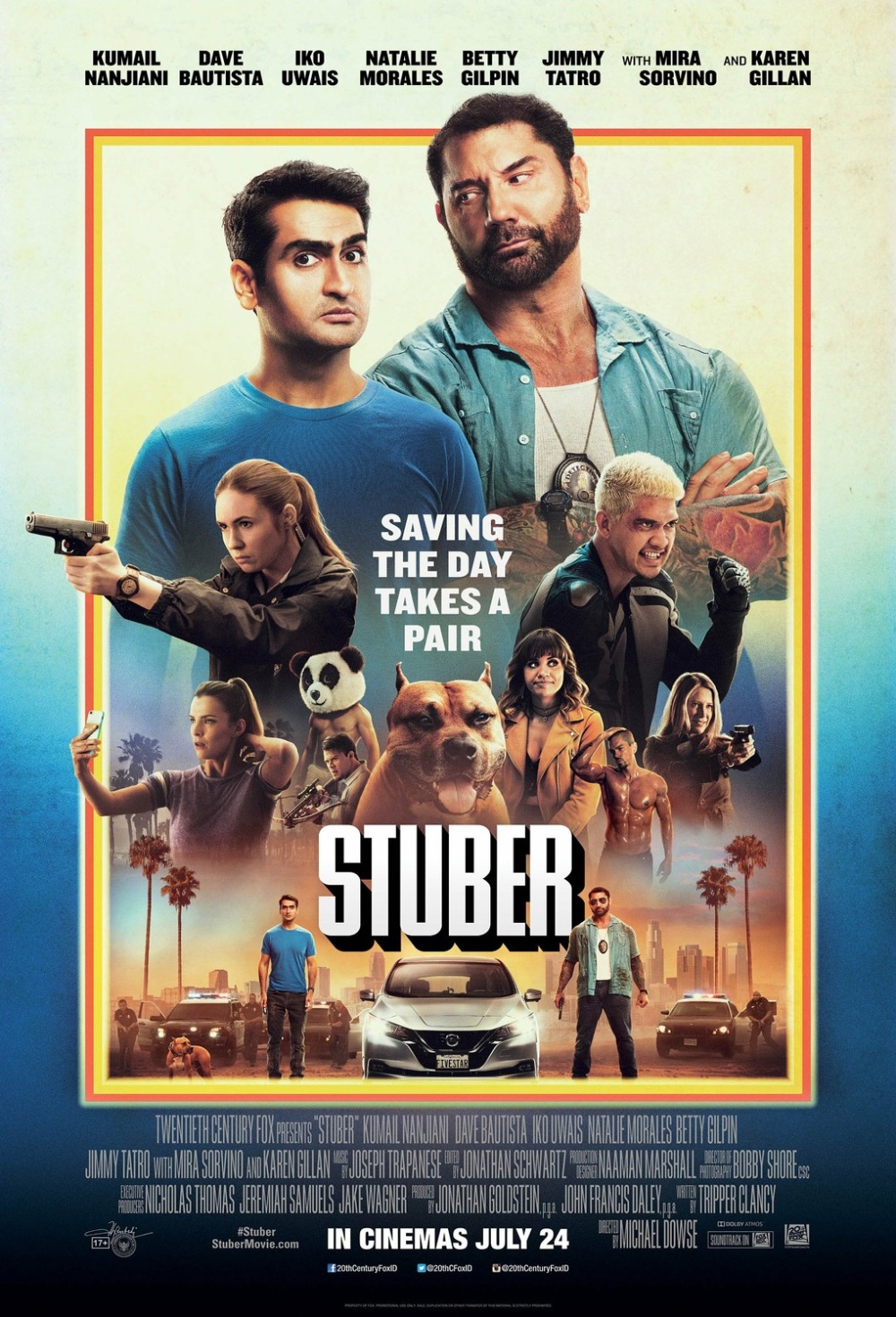 “Stuber” feels like an overdue return for me to action comedy genre. Seriously, it feels like I have been away from this particular genre for far too long. While there may have been many action comedies/buddy movies released in recent years, I cannot help but feel like the last one I bothered to watch was 2010’s “The Other Guys” with Mark Wahlberg and Will Ferrell. Watching “Stuber” brought to mind movies like that and also “Stakeout” in which Richard Dreyfuss and Emilio Estevez play Seattle detectives spying on Madeline Stowe, and it remains a classic I never get sick of watching. “Stuber,” however, doesn’t quite reach the greatness of “Stakeout” or “The Other Guys,” and watching it made me feel old as I begun to realize I have seen this type of movie so many times.

This movie starts off with a shockingly visceral action sequence as Los Angeles detective Victor Manning (Dave Bautista) relentlessly pursues ruthless drug trafficker Oka (“The Raid’s” Iko Uwais) inside a downtown hotel. This opening took me for a loop as the violence is not the least bit sugar coated as bullets inflect tremendous damage and the blood flows more freely than in the average comedy. Unfortunately, Oka escapes Victor’s grasp and mortally wounds his partner, Sarah (Karen Gillan), and this leads to a scene which has Victor more or less saying, “don’t you die on me!”

From there, the story moves to several months later where we meet Stu (Kumail Nanjiani) who, when he isn’t working his job at a corporate home improvement store, is out on the town as an Uber driver. Stu is also juggling his work life with his personal one as has deep feelings for his best friend Becca (Betty Gilpin) whom he is about to open a cycling exercise gym with. Then one day, while trying to maintain at least four-star rating on Uber so he can avoid deactivation, he gets a ride request from Victor who finds himself on the path of Oka yet again, and everyone’s life, career and Uber rating is on the line more than ever before.

The one thing which immediately stuck me about “Stuber” is how it reminded me of how the atmospheres of Uber and Lyft are completely different from one another. Whereas in “The Equalizer 2” where Denzel Washington got along with his passengers was only attacked by one but not because he was a Lyft driver, Stu invites trouble simply because Uber passengers are far too quick to give him a one-star rating for reasons which are not necessarily his fault. Seriously, Lyft has a better reputation than Uber, and this movie is a reminder of that.

“Stuber” is a movie aimed at entertaining its target audience and, as a result, employs an endless number of clichés which this genre is known for. Victor is a cop who is obsessed with bringing down the bad guy at any cost, and his endless pursuit has long since cost him the loving relationship he had with his daughter, Nicole (Natalie Morales). When these two men are forced into a situation brought about by circumstance, each wonders who is more manly than the other as they are forced to deal with issues which they have put off to the side for far too long.

On the upside, the pairing presented in “Stuber” is perfect as these two actors and their characters could not be further apart from one another if they tried. Bautista is a former wrestler who became an unforgettable presence in the Marvel Cinematic Universe when he played Drax in the “Guardians of the Galaxy” movies, and he has proven to be a memorable screen presence in “Blade Runner 2049,” “Spectre” and “The Man with the Iron Fists.” Nanjiani is a Pakistani-American stand-up comedian, actor, and podcast host who is best known for writing and staring in “The Big Sick,” a movie I should have already watched. This should be enough to inform you these two individuals are exact opposites from one another.

Bautista makes Vic Manning into the typically obsessed detective you are bound to find in a movie like this, and he makes this character an empathetic one as he tries to fix things with his daughter while bringing down an especially devious criminal. Nanjiani’s character is the more human of the two as he tries to survive a situation he has been unexpectedly thrust into while trying to be honest with Becca about his feelings for her. Together, these two actors make quite the pair as they race through Los Angeles in an electric car which is leased instead of owned.

Having said that, “Stuber” falls victim to playing far too often with clichés this genre has dealt with for far too long, and it gets to where we know the direction this story is heading in. Granted, I did not go into this movie expecting something original, but the filmmakers still had a chance to give us something both fresh and entertaining and they did not quite pull it off here.

The problem filmmakers have in making action comedies is balancing out the action with the comedy, and it is a balance which is harder to achieve than anyone initially thinks. “Stuber” was directed by Michael Dowse, a Canadian filmmaker who previously gave us the “FUBAR” movies which dealt with two lifelong friends and head bangers living out their lives, and also the sports comedy “Goon” which dealt with ice hockey. One of his movies I especially liked was “What If” which starred Daniel Radcliffe and Zoe Kazan in a romantic comedy that followed a well-established formula but still proved to be highly entertaining and absorbing nonetheless.

With “Stuber,” I couldn’t help but think Dowse would really freshen up the buddy comedy formula to great effect, but it only goes so far here. On one hand the action scenes are excellent and visceral, but on the other they seem too brutal for a movie which aims to keep us laughing hysterically. The shift from comedy to action is at times very jarring to where I wasn’t sure whether I should be laughing or clinging to the edge of my seat. And this movie doesn’t have the kind of action which could be seen as make believe. The bullets hit hard and leave a lot of damage, and the blood flows a lot more than it ever did in “Stakeout.”

When all is said and done, “Stuber” is not able to balance out the action and comedic elements with total success, and it is at times more violent than it needs to be. Also, I have seen this kind of movie so many times now to where it all feels routine, free of surprises and run of the mill despite a game cast that gives the material their all. Yes, it has its moments, and it is a reminder of why I would rather drive for Lyft instead of Uber, but for me this one is a near miss. I cannot say I didn’t enjoy it, but it is a movie which will not stay in the memory for very long after you depart the movie theater. Suffice to say, this is no “Stakeout” or “The Other Guys.”