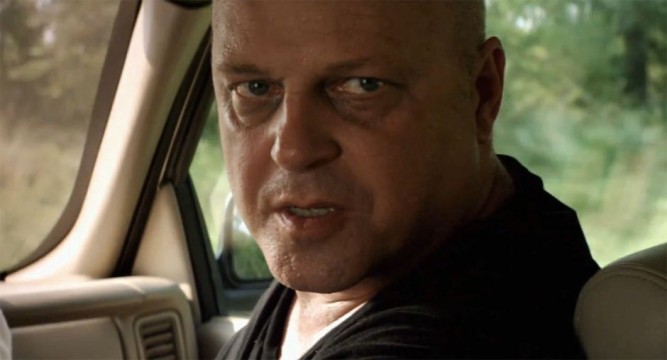 WRITER’S NOTE: This article was written in 2013.

Michael Chiklis has been a very busy actor lately. Ever since the transformation his career took when he played Vic Mackey on “The Shield,” he has gone on to appear in two “Fantastic Four” movies as the Thing, and he now stars alongside Dennis Quaid on the CBS television show “Vegas.” But now he’s back on the silver screen in “Parker” which stars Jason Statham and is directed by Taylor Hackford, and in it he plays the vicious bank robber Melander. Chiklis has become one of the few actors working today who can go from television to film and from playing a hero to portraying a villain with relative ease. Many actors get typecast to where audiences won’t allow themselves to see them as anything else, and this is why we admire Chiklis because he appears to have completely bypassed that hurdle.

I got to catch up with Chiklis when he was at the press conference for “Parker” which was held at the Four Seasons Hotel in Beverly Hills, California. He told us he would soon be directing an episode of “Vegas,” but this is nothing new for him as he previously directed episodes of “The Shield.”

Michael Chiklis: I have fun with it. I deliberately boss everybody around… No, I’m kidding. I don’t make a big deal of it. It’s usually I take a lot of gut from my fellow actors because they want to give you a hard time. It’s to be expected and I just take it.

One of the reporters told Chiklis that Melander is “a real dick,” and he responded to this description with a big laugh. It was never lost on the actor how his character was a complete bastard, and he reveled in the opportunity to play a full out bad guy. While Vic Mackey from “The Shield” may have been an antihero, Melander has no redeeming qualities whatsoever.

MC: This guy’s a malevolent prick and great. I can just sort of unabashedly get to be a dick which is fun. When you get to do that in real life? You don’t unless you want to be a pariah. One of the wonderful things about being an actor is you get to walk a mile in another man’s shoes, and the other great thing is that you get to step out of them and not be in the shoes anymore. It was wonderful to sort of step into a pair of shoes of a guy who’s all about himself; a narcissistic, sociopathic douche bag and just let that be.

Since he’s become known for playing such hard boiled or douche bag-like characters, it is tempting to think Chiklis is not much different from the ones he played on “The Shield,” “Vegas” or “Parker.” But he didn’t need to convince us he isn’t because if he was like Melander in “Parker,” he would be in jail or even on death row. Chiklis does get a kick out of how people can mistake him for the characters he has played, but it’s clear he’s not out to live up to this image we have of him either.

MC: I think Vic Mackey in particular had an effect on people. I’ve had grown men shake my hand like this (and he showed their handshakes to be full of nervous energy), and I’m like, oh dude it’s all right, I’m not gonna hurt you. That’s happened, but as the father of daughters that’s not such a horrible thing. There are benefits to that. Sometimes it’s scary though because some people really don’t have a capacity to separate truth from fiction. It is a movie and we’re actors playing parts, and I’m not fucking Vic Mackey, I’m not. I’m not a malevolent prick, I’m just not, but I have fun playing one and I’m sure I’ll play others in the future. I like to mix it up and play all kinds of people.

Like I said, Chiklis is one of those actors who can go from playing a good guy to playing a bad one, and we never doubt he will give a strong performance as either kind of character. All of us at this roundtable interview couldn’t help but wonder if he likes playing bad guys more than good ones, or if he likes playing both types of characters equally. But like any other actor, famous or not, Chiklis is not looking to play the same type of person over and over again.

MC: The reason why that’s true is because I don’t prefer to do one or the other. I like to all of that. I’m terrified of complacency and I do not like to be boxed in. I’ve always wanted be diverse, and the more diverse you are, the more of an opportunity you’ll have to play a wide variety of roles. Some people thrive in an area that they have their note in and their terrific at it, and they just sing the note all the way to the bank and good for them. That’s just not my way. I can’t do that.

Chiklis compared his interest in acting roles to his iPod which he said has music by The Tubes and Sergei Rachmaninoff on it. What he ended up saying made perfect sense as none of us like to listen to the same type of music all the time. We need variety, and it’s this same type of variety which Chiklis demands as an actor. Now most actors don’t get to indulge in any kind of variety, but he admits many give him strange looks when it comes to his taste in things.

MC: I have eclectic taste in film and television and musicals. People freak out because I went to see “Glengarry Glen Ross” when I was just in New York, and then the next night I was at “Newsies and they were like, what the? And I dig both because that’s life. I’d hate like hell to look at the same flower every day no matter how beautiful it was. It just makes to me a more interesting life and career, and I’m just blessed that I’ve been able to afford the opportunity to play these characters.

Now Chiklis didn’t always have this diversity in his career as for years he was known for being on the comedy-drama TV series “The Commish” which had him playing a suburban police commissioner in upstate New York named Tony Scali who worked through various problems with humor and creativity. This led to Chiklis to being typecast as a nice guy in film and television, and to him playing the same type of character in many projects like the ill-received television series “Daddio.” It took someone very close to make him realize what he had to do to change his future as an actor.

MC: A lot of the diversity in my career which I always desired, but I didn’t necessarily know how to attain, I credit to my wife because she made the statement to me years ago: it’s not incumbent upon the studios to reinvent you, it’s incumbent upon you to reinvent yourself. And I just looked at her and went that’s right, that’s correct and that’s brilliant. Actors become puzzle pieces in that he fits there, she’s fits there, and you can understand that. So, I was fitting in the rolly polly affable guy place for a lot of these people, and I couldn’t just expect them in osmosis to go like, oh yeah, Chiklis, bad ass mother fucker because they’ve never seen that from me. So, she simply pointed out, you want them to see you that way? You’ve got to show them that and you’ve got to demand that.

Demanded it he did, and Michael Chiklis’ acting career is now stronger than it has ever been. He plays a remorseless bank robber in “Parker,” and at the same time he portrays a Chicago mobster on “Vegas.” It doesn’t look like this actor will ever lack for a variety of roles at this point in his life, and this says a lot about his talent as well as his perseverance in an industry as fiercely competitive as this one is. More power to him!

CLICK HERE TO CHECK OUT THE EXCLUSIVE INTERVIEW WHICH I DID WITH MICHAEL CHIKLIS FOR THE WEBSITE WE GOT THIS COVERED.