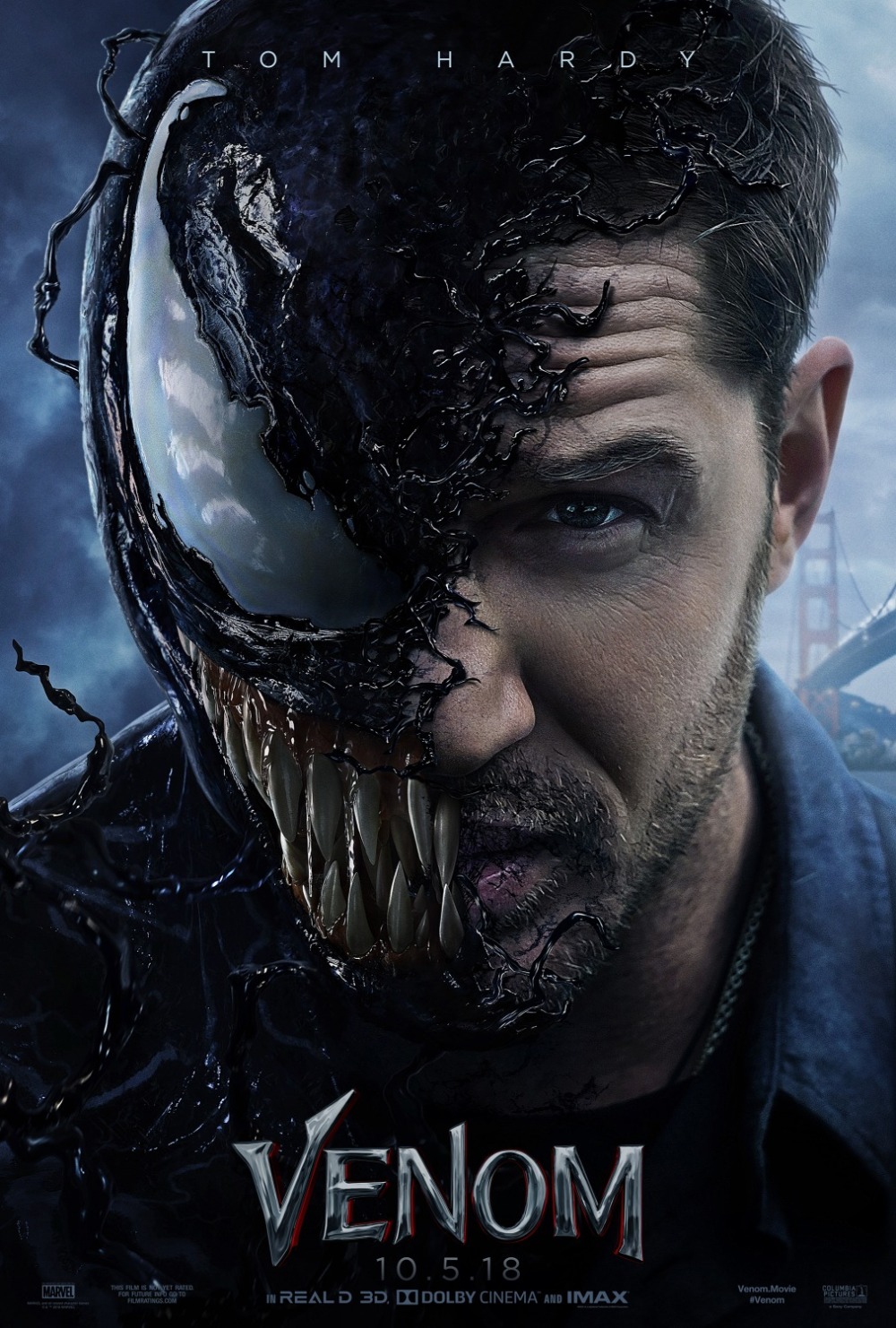 My feelings about “Venom” are decidedly mixed. On one hand, I came out of it thinking a better movie could have been made out of this material. On the other, I cannot deny I found what ended up onscreen to be very entertaining. There are times where I wanted filmmakers to realize how less is more and how silence can be golden, but you don’t go into a comic book movie like this expecting a Terrence Malick film, and its tagline of “the world has enough superheroes” serves as a way to make it stand out among others of its genre. With this one, we can expect a little more nastiness than usual, albeit of the PG-13 variety.

The character of Eddie Brock and his alter ego of Venom has been begging for a proper cinematic treatment ever since he made his debut in the highly disappointing “Spider-Man 3.” In that ill-fated sequel, Venom was introduced almost as an afterthought to where it seemed like the bosses at Sony and Columbia Pictures forced Sam Raimi to add the character into a movie which was already overflowing with them. Well, this time Venom gets his own movie which feels long overdue, and he is played by the great Tom Hardy who has played his share of larger than life characters to where he is right at home with this one.

“Venom” starts off like the average “Predator” movie does, with a spacecraft of some kind crashing down violently on planet Earth and introducing a foreign organism, in this case a symbiote, which will soon wreak havoc on humanity. This, however, doesn’t stop Carlton Drake (Riz Ahmed), a brilliant inventor, from experimenting on them with the help of desperate human subjects who just want a place to sleep and food to eat.

Meanwhile, we are introduced to Eddie Brock, an investigative journalist who is infinitely determined to get to the truth no matter what the cost. Eddie has a nice apartment in the great city of San Francisco and a loving girlfriend in district attorney Anne Weying (Michelle Williams, who looks lovelier in each movie she appears in), but all of this disappears when he goes after Carlton in an effort to expose his corruption. But with greed taking precedence over ethics, Carlton succeeds in ruining Eddie’s life and gets him fired from his job, and Anne breaks up with him upon learning he got into her email which contained confidential information. It makes you want to smack Eddie for not realizing he could have clicked on the “mark as unread” button to cover his tracks.

“Venom” then moves to several months later where Eddie is now living by himself and lamenting his present state where, when someone asks if he is Eddie Brock, he responds he used to be, a cliché which has been used one too many times. However, he gets a chance to be an investigative reporter again when the ethical and concerned Dr. Dora Skirth (Jenny Slate) informs him of the experiments Carlton is doing with the alien symbiotes. But when Dora sneaks Eddie into the Life Foundation which Carlton oversees, he ends up getting infected by a symbiote and inherits superpowers no mere mortal can easily handle.

It takes a bit for “Venom” to get things going as the filmmakers are not quick to see Eddie get infected by a symbiote. Once he does get infected, it provides Hardy with an interesting acting challenge as he has to play someone inhabited by another personality. Steve Martin did this to perfection in “All of Me,” and it is never as easy as it looks. As Eddie struggles to maintain some semblance of sanity while Venom seeks to dominate his body and soul, Hardy illustrates this uneasy balance with believability and a good dose of humor. Seeing him dive into a lobster tank in a restaurant just to bring down his temperature is a gas, let alone watching him eat constantly and not look like he’s gaining weight.

I was also surprised at how good Hardy’s American accent is here. The trailers for “Venom,” which did not do this movie many favors, made Hardy’s accent sound bizarre and out of place, so it’s a relief to see him pull it off without any hitches. In addition, the actor provides a perfectly ominous voice for Venom which comes close to equaling the one he gave Bane, and it is fun to watch Hardy essentially talk to himself as he races through the streets of San Francisco and reaching heights Steve McQueen never did in “Bullitt.”

The story reflects present day events as we have watched the most ethical of reporters get hammered by certain people who have made the terms “fake news” and “alternative facts” unforgivably popular. Fake news may just be smoke, but for some it is thick enough to hide behind. It’s also interesting to see Riz Ahmed play his villainous character of Carlton Drake as if he were a variation on Elon Musk. Ahmed portrays Carlton not so much as an evil mastermind, but instead as someone whose ambition cannot be reigned in, and it gets to where all sense of morality is lost to him as he convinces himself he is the one to save humanity from certain destruction.

“Venom,” however, does get bogged down a bit by needless clichés which I could have done without. As we watch Eddie drink away his sorrows in a lonely bar, someone asks if he is Eddie Brock. His answer of “I used to be” is a piece of dialogue I have heard far too many times. After watching “The Predator” in which Shane Black laid waste to a number of action movies clichés, I came into this one hoping Ruben Fleischer, the director of “Zombieland,” would inject a bit more freshness into these proceedings than he did.

Also, is it just me, or does Scott Haze, who plays evil henchman Roland Treece, look like Billy Corgan? Haze doesn’t get much of a chance to make Roland more than the average bad guy, and I kept waiting for Eddie to tell Roland he liked him better as the lead singer of Smashing Pumpkins. No such luck though.

The movie climaxes in a chaotic fashion with loud noises and explosions, and there are a couple of post-credit scenes which do deserve your attention. One of those scenes promises a follow-up with a character who aims to be as brutal as his name. There’s also a kick ass theme song done by Eminem in which the artist continues to spit out rhymes at lightning speed, although it might have been cooler to see it put at the movie’s beginning instead of being played during the end credits. I also could have done with more of Jenny Slate in the movie. She disappears from it way too soon.

Again, I left “Venom” with mixed feelings as I felt a better version of this material could have been brought to the silver screen. Still, what I did see was never boring, and watching Tom Hardy taking on such an iconic role was alone worth the price of admission. How you feel about the movie may depend on how familiar are with this comic book character. I myself never really read many comic books as a kid, so I am unsure how the most die-hard of fans will react to this finished product. My hope is more of them will get a kick out of it than not, but they can be infinitely critical to no end.