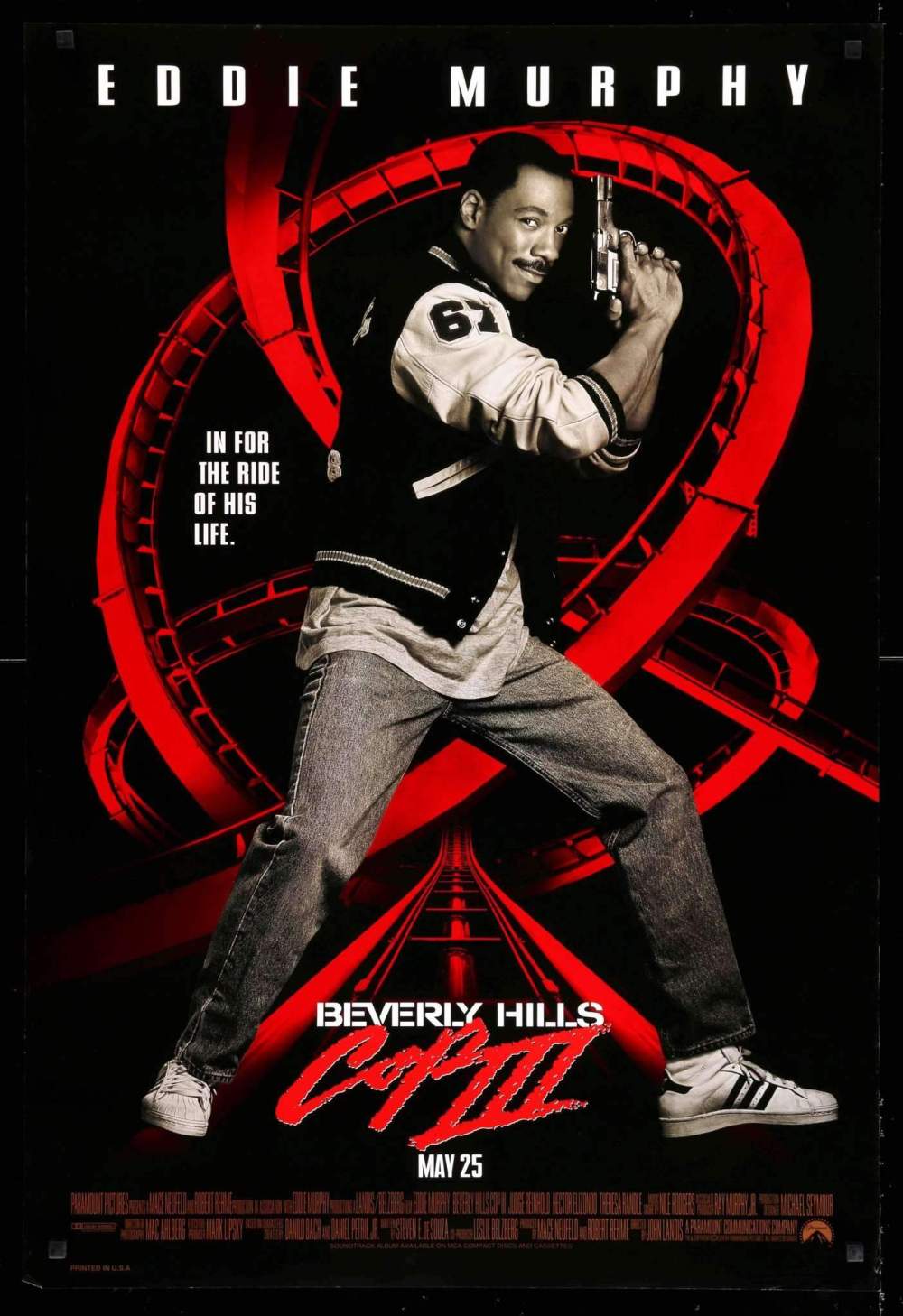 There’s a scene early on in “Beverly Hills Cop III” where we see Detroit Detective Axel Foley (Eddie Murphy) walking down a tunnel located beneath the Wonder World amusement park. It’s almost a silent movie scene as Axel just walks and says nothing. In moments like these, Murphy is quick to come up with something very clever to make things lively, let alone funny, but here he does nothing but walk, and it represents the lack of passion he appears to have had for reprising one of his most famous cinematic characters. Murphy was paid $15 million for this long-awaited sequel, and watching him in it made me feel like he just took the money and ran.

When “Beverly Hills Cop III” came out in 1994, the same year I graduated from high school, I was very excited to see Murphy bring Axel Foley back to the silver screen as the first two movies in the franchise were among my favorites to watch over and over as a kid. But after watching him in this second sequel to Martin Brest’s 1984 smash hit, I felt like giving up hope of his career ever making a much-needed comeback.

As with the previous two movies, Axel Foley heads over to Beverly Hills following the death of a friend, in this case his boss, Inspector Douglas Todd (the late Gill Hill). Once there, he is reunited with his friend Billy Rosewood (Judge Reinhold) who has since become promoted to the role of DDO-JSIOC, Deputy Director of Operations for Joint Systems Interdepartmental Operational Command. His partner John Taggart has since retired, and he now partners with Jon Flint (Hector Elizondo) who already knows all about the trouble Foley causes whenever he drops by. Unsurprisingly, Foley raises all kinds of hell as he infiltrates Wonder World, a Disneyland-like amusement park, where the criminal link he is seeking out resides.

The big news about “Beverly Hills Cop III” is it reunited Murphy with John Landis, the director who helmed two of his best movies, “Trading Places” and “Coming to America,” the latter which had them coming to blows to where they promised they would never work together again. Through the graces of the movie gods, they overcame the differences to work together again, but the end result proves to be infinitely depressing as their efforts cannot equal the comic genius which preceded it. Sure, there are some good moments like the mechanics we see singing “Come See About Me” by The Supremes, the hilarious blunder of a police raid at the movie’s beginning and a scene where Foley rescues kids on a ride which has malfunctioned, but they all feel half-realized. Having re-watched this sequel recently, I keep thinking of all the ways this sequel could have been improved, and the list of those improvements is depressingly long.

Years after its release, Landis described the making of “Beverly Hills Cop III” as being “a very strange experience.” He said the screenplay, written by Steven E. de Souza of “Die Hard” fame, was terrible, but he believed Murphy could save it with his unique brand of humor. But while we have come to know Axel Foley as a wise-cracking cop, this sequel sees him become a more mature character. This proved to be a big mistake as I went into this believing Murphy would not hesitate in bringing his unique sense of humor to this project. But in taking Axel Foley in a different direction, Murphy ends up subverting our expectations in a negative way. Some franchises thrive on evolution, but this one is the kind which thrives on familiarity as “Beverly Hills Cop II” did nothing to change the formula of the original.

Seriously, it feels like Murphy isn’t even trying here. Perhaps we have asked too much of him over the years as screenwriters feel they don’t need to provide him with much material because everyone believes Murphy can come up with comedy gold no matter what. Maybe the man who became a star on “Saturday Night Live” and in “48 Hrs.” felt it necessary to remind his fellow filmmakers of how he cannot always come up with the goods. Still, it looks like he is coasting on his ego and fame to get this sequel to the finish line, and he just ends up looking like a fool in the process.

Indeed, there is much about “Beverly Hills Cop III” which feels lacking. The first two movies were produced by Jerry Bruckheimer and the late Don Simpson, but they both bailed on this franchise and were replaced by Mace Neufeld and Robert Rehme, best known for bringing the novels of Tom Clancy such as “The Hunt for Red October” to the silver screen. They seem an ill fit when it comes to the “Beverly Hills Cop” franchise as they make this particular sequel feel bland and infinitely uninspired.

Also missing this time out is Harold Faltermeyer who famously composed the score for the first two movies and made the “Axel F” theme one of the most popular to come out of the 1980’s. In his place is Nile Rogers, but his presence only exacerbates what is not present here. John Ashton was unable to return, so his part was more or less rewritten for Hector Elizondo. Ronny Cox failed to return as Captain Bogomil, but he explained why during a 2012 interview:

“They wanted me to be in ‘Beverly Hills Cop III,’ but…I read the script.”

It is nice to see Reinhold back as Billy Rosewood, but he really doesn’t get much to do here. As for Elizondo, his character of John Flint is essentially John Taggart, and the only thing which has changed here is the last name. The fact these characters share the same first name should give you an idea of how hard the screenwriters worked at distinguishing the characters from one another (which is to say, not at all). For what it’s worth, Elizondo does have this sequel’s best line of dialogue:

“I got a wife and three kids. I haven’t seen a fifty (dollar bill) in twelve years.”

As for the villains of “Beverly Hills Cop III,” they are a bland bunch with little in the way of dimension to make them the least bit interesting. Timothy Carhart has given memorable performances in “Thelma & Louise,” “Ghostbusters,” “Witness” and “Working Girl,” but as Ellis DeWald, he doesn’t get much to work with. His character is essentially the one-dimensional villain who might as well tell the audience, “Hate me! I’m the bad guy and I am greedy. I live for money and nothing else!” Steven Berkoff, Jürgen Prochnow and Brigitte Nielsen had more to work with in the previous “Beverly Hills Cop” movies, so it makes me feel bad for Carhart here.

Did anyone escape the aftermath of “Beverly Hills Cop III” in one piece? Well, Bronson Pinchot does return as Serge in a cameo, and he is a very welcome presence as his character has gone from working in the art gallery to hosting the “Survival Boutique” which features a massive weapon which is even capable of making coffee, something I know a future version of the iPhone will be able to do. Theresa Randle also has some nice moments as Wonder World employee Janice Perkins, and she shares a good deal of chemistry with Murphy which, in retrospect, this sequel could have built more upon. I also remember audience members cheering loudly when Randle punched a bad guy in the face, and this reminds me of how this sequel came out in a time where we didn’t see enough women kicking ass like that. Thankfully, times have changed.

When “Beverly Hills Cop III” reaches its final act, it feels so lazily put together to where you wonder if anybody involved here just gave up before the production wrapped up. The defeat of the bad guy feels completely unfulfilling, and the revelation of another character seems just tacked on for no particularly special reason. Once the end credits came up, I found myself walking out of the theater very disappointed. The first two movies in this franchise were some of the most entertaining of my youth, but this one felt inescapably underwhelming.

Looking back, this seemed like the ending of Eddie Murphy’s career as the wisecracking comedian we came to love so quickly seemed to have disappeared forever. Granted, he scored a huge comeback with the remake of “The Nutty Professor” and went on to score an Oscar nomination for his performance in “Dreamgirls,” but “Beverly Hills Cop III” really felt like the end. We have seen Murphy go through so many ups and downs, and this one felt like the final straw.

As I write this review, the possibility of a “Beverly Hills Cop IV” is still in the air despite many false starts. Murphy has long since admitted how the third entry in this franchise was “atrocious,” so here’s hoping the next entry not only redeems the character of Axel Foley, but is also made with a lot of heart and thought. It’s not enough to please an audience. You need to give them a reason to pay for a movie ticket instead of just banking on their nostalgia. While you are at it, bring back Harold Faltermeyer. His music would be a very welcome addition, and it will serve as a reminder of how the 1980’s never left us.