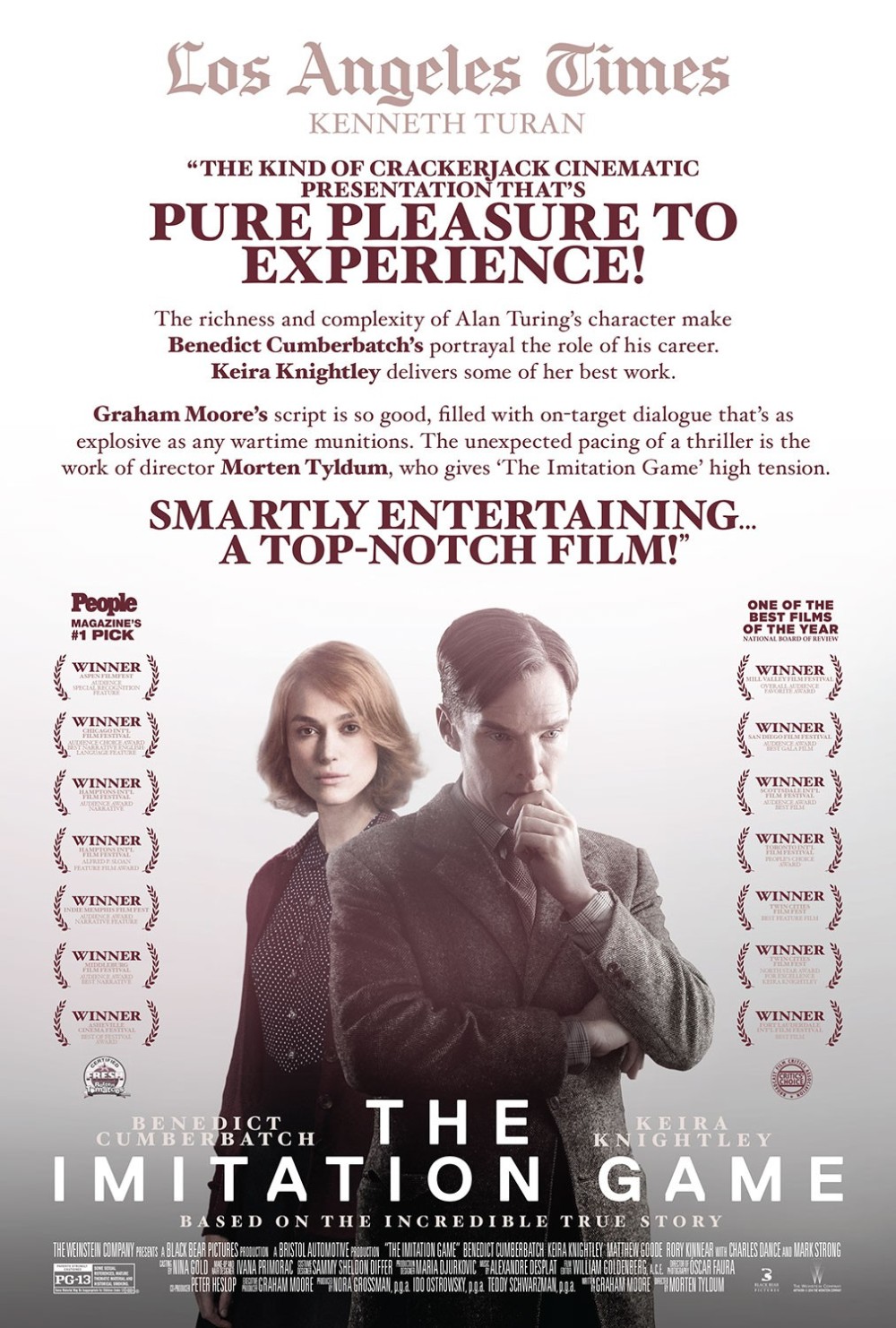 Movies “based on a true story” keep coming at us like Election Day fliers in the mail, but “The Imitation Game” is one of the few that actually deserves our full attention. It portrays the life and work of Alan Turing, one of Britain’s most extraordinary heroes, whose efforts and accomplishments remained unsung for far too long. At the same time, it is a movie about secrets; how we keep them, the importance of keeping them and of the damage they can do when uncovered by others. What starts off as a typical biopic becomes something much more as we watch how Turing and his crew of code breakers helped bring an end to World War II, and of how his life came to a tragic end through needless and unwarranted intolerance.

When it came to finding the right actor to portray Alan Turing, the filmmakers could not have found one better than Benedict Cumberbatch. While other actors would have made the mistake of portraying Turing as some kind of Dr. House clone, Cumberbatch turns him into a fascinatingly complex human being who is brilliant, socially awkward, and very vulnerable in a time where being vulnerable could be a huge liability.

For those who don’t know, Turing was a brilliant mathematician and cryptanalyst who worked at Bletchley Park, the top-secret Government Code and Cypher School during World War II, where he created a machine which succeeded in breaking Germany’s seemingly unbreakable Enigma machine. Cumberbatch makes it clear just how incredibly smart Turing is during his first meeting with naval commander Alastair Denniston (Charles Dance) as he turns a hopelessly bad job interview into an unforgettable demonstration of his deduction skills.

What I loved about Cumberbatch’s performance is how he makes Turing curt with people in a way which is arrogant but not necessarily mean. It’s no surprise his fellow co-workers have a tough time warming up to him as he is determined to do things his way and has little time for anybody who doesn’t think as fast as he does. But part of the fun is watching Cumberbatch take Turing from being an anti-social human being to one who is genuinely eager to involve the rest of his crew in breaking Enigma.

One of the colleagues who came to be a big help to Turing is Joan Clarke, a Cambridge mathematics graduate played by Keira Knightley. Her entrance in the movie is great as the other men consider her to be in town only to apply for secretarial work, but Knightley makes Clarke into a very confident character who is more than ready to prove her worth in a male dominated environment. She also becomes one of Turing’s best friends through thick and thin as she helps ease him into social gatherings and become one of the guys instead of such an isolated individual. Even as Turing’s life heads down the tubes, Clarke is still there for him as she understands him in a way few others do.

I figured “The Imitation Game” would climax with Turing’s machine breaking Enigma, and the sequence where Turing and the others succeed in doing so is intensely exciting. But in a sense, it marks the beginning of the end for this group as they come to discover how the secrets they have uncovered lead to other secrets being made and kept for the good of the people. There’s even a scene where Turing’s crew discovers when a cargo ship is going to be attacked, and they debate on whether or not they will stop it as doing so risks undoing all the work they have accomplished. I love it when dramatic movies provide characters with such difficult dilemmas to solve, and this film comes with some of the most agonizing.

Again, this is a movie about secrets, and it becomes fascinating to see how the keeping of these secrets comes to deeply affect each character. True identities are revealed and compromised, and while certain secrets are kept in the dark to give England an advantage in the war, others secrets come to destroy those who had the misfortune of living in a time where certain behaviors and orientations were criminalized. Turing is the one who suffers the most as his private life is revealed to the world which forces him to face an utterly cruel and unnecessary punishment.

“The Imitation Game” was directed by Norwegian filmmaker Morten Tyldum whose previous works include “Headhunters,” “Fallen Angels” and “Buddy,” and he also directed “Passengers” starring Jennifer Lawrence and Chris Pratt. Tyldum has done an excellent job in transporting us back to the days of World War II in a way which feels unique and not overly familiar. His emphasis is on the characters just as it should be, and he succeeds in making this not just another traditional biopic. He pays great respect to Turing throughout as this is a man who made a huge difference not just in World War II but also in the development of future technologies we have become far too dependent on these days.

Cumberbatch has long since proved how great an actor he is with his work on the London Stage and on “Sherlock,” and he was prominently featured in “The Hobbit: The Desolation of Smaug” and “Star Trek into Darkness.” In “The Imitation Game,” he takes us on quite the emotional ride as we see him triumph in what he does best and suffer horribly in a time where he doesn’t quite belong. He makes you feel Turing’s pain as it is reduced to a shell of what he once was, and the scene where he is unable to even start a crossword puzzle is devastating to witness.

But Cumberbatch isn’t the whole show here as he is surrounded by a wonderful group of actors who are every bit as good. Keira Knightley does some of her best work yet as Joan Clarke, the woman who comes to understand Turing the best. Matthew Goode, so unnerving a presence in “Stoker,” is the epitome of perfect casting as Hugh Alexander; the chess champion and man about town we would all like to be in our everyday lives. Mark Strong makes Major General Stewart Menzies a deeply enigmatic (no pun intended) character who knows far more than he ever lets on. And then there’s Rory Kinnear who portrays Detective Robert Nock, the man who investigates Turing and becomes very eager to keep his life from being ruined. Kinnear is very strong as he shows us the detective’s inner conflict in convicting a man who is truly responsible for saving many lives.

Turing ended up taking his own life at the young age of 43, and it is only in recent years that he has people have acknowledged the terrible treatment he received. In August 2009, John Graham-Cumming started a petition urging the British Government to apologize for Turing’s prosecution, and then Prime Minister Gordon Brown acknowledged and described Turing’s treatment as “appalling.” A few years later, Turing received a pardon from the Queen under the Royal Prerogative of Mercy, but many are still waiting for an apology over the way he was treated chemically. This man was responsible for helping to end the Second World War, and while he was alive he was treated with derision more than respect by many. Thanks to “The Imitation Game,” people will now see the kind of person Turing really was and why he deserves to be seen and celebrated as a hero. Believe it or not, his creation of his machine became the prototype for what we today call computers.

This is a terrific film.