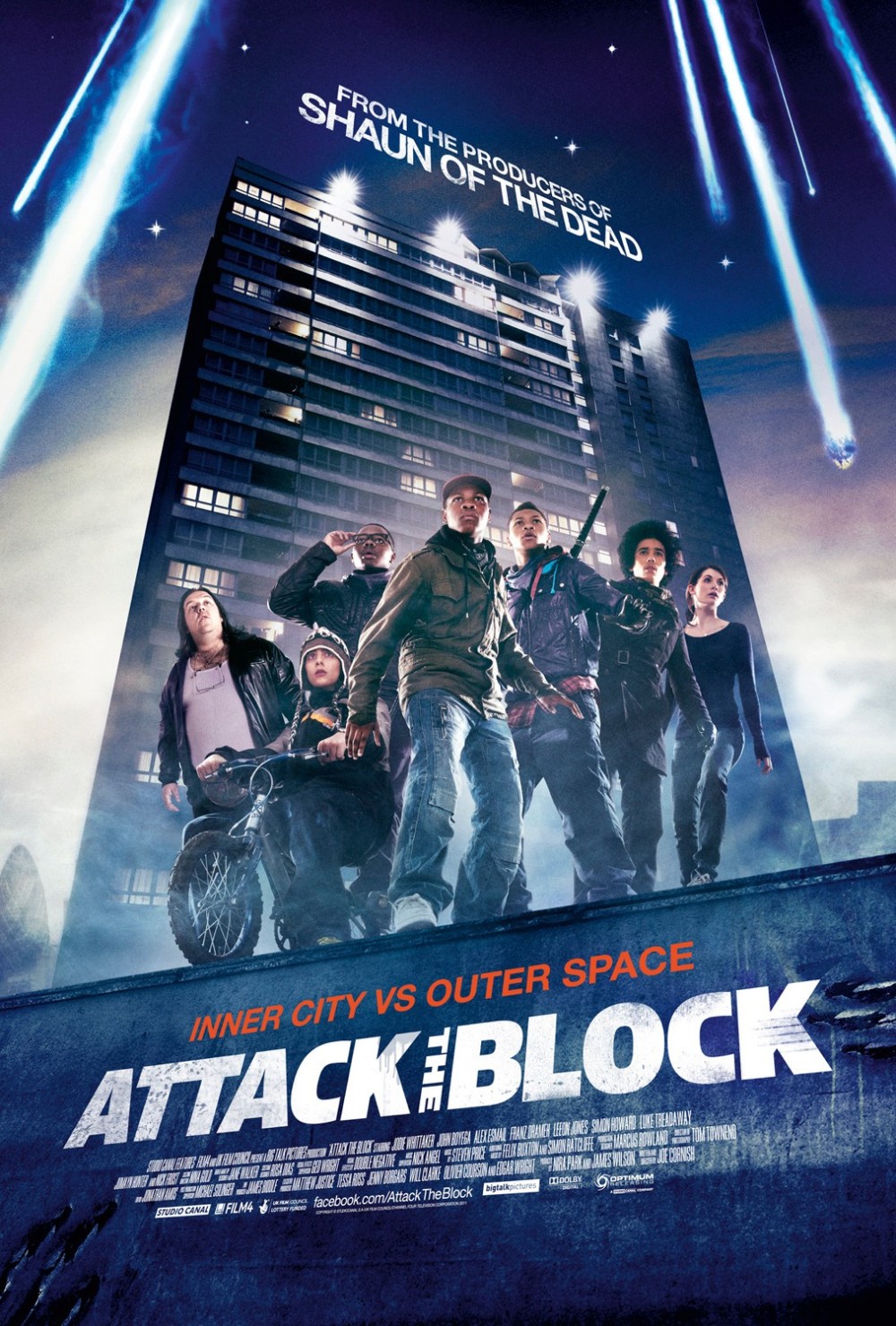 “Attack the Block” is a highly entertaining combination of action and sci-fi genres which deals with humans defending themselves against a swarm of unfriendly extra-terrestrials. It follows a street gang of young kids who, in the process of robbing a female nurse, get greeted by an alien who lands with a loud thud on someone’s car (here’s hoping they have auto insurance). It marks the beginning of an attack by an alien race which immediately tears apart anything in its path, and it’s up this gang of delinquents to save the day.

The majority of “Attack the Block” takes place in a council estate, a location which houses the financially challenged of England’s residents, and it is generally overrun by a nasty criminal element. This setting has been used to great effect in “Fish Tank” and “Harry Brown,” movies which effectively showed how isolating it can be to live there. The characters presented feel very true to life, and it makes what could be seen by many as another B-movie far more effective as a result.

Leading this street gang is Moses (John Boyega), a 15-year-old who is older than his age would suggest. Moses and his mates spend their time robbing those walking through the terrace they live in. But when the aliens enter into their territory, they find antagonists that are completely unwilling to give up their valuables (assuming they have any), and the threat they pose to this gang make their struggles in daily life a cakewalk in comparison.

“Attack the Block” was directed by Joe Cornish, an English comedian, television and radio presenter, director, writer and actor. This marks his directorial debut as he has previously helmed several behind the scenes documentaries like “The Fuzzball Rally” featured on the “Hot Fuzz” DVD and Blu-ray. Cornish’s work here is very assured, and he does an excellent job of combining elements of horror and comedy to great effect, something never easy to pull off. He also generates highly suspenseful moments which really get the audience on edge, and they make for a surprisingly unpredictable motion picture.

Of all the performances, the most impressive comes from John Boyega as Moses. This is his film debut, but he looks and acts like he’s been acting for ages as his eyes reveal a battle over how far he will go and of all the bad things he has seen in life. As the fight against the aliens goes on, it offers his character a chance for redemption and to be a hero, and Boyega makes Moses earn those honors long before the film’s conclusion.

Also impressive is Jodie Whittaker as Sam, a hospital nurse faced with an impossible situation where she has to work with the same gang of kids who mugged her in order to survive. Whittaker convincingly takes her character from being a frightened woman to one who holds her own alongside these kids, and she is not your typical horror victim screaming her way throughout the entire movie.

It’s also great to see Nick Frost here as the drug dealer, Ron. Frost brings an ever so dry humor to the proceedings, and all the other actors work off of him to great effect. In each movie he does, Frost is brilliant at sneaking the occasional joke in when you least expect it, and you can always count on him to leaving on the floor laughing.

“Attack the Block” was made for only $13 million, and the visual effects the filmmakers came up with are very impressive considering the budget. Having less money forces directors to be more creative, and Cornish succeeded in making this film look like it cost a lot more. The aliens themselves are minimal in their design, but they feel far more threatening than the ones you might remember from “Cowboys & Aliens.” Their pitch-black fur is highlighted by neon-like eyes and teeth, and their horrendously loud shriek is certain to make audiences jump out of their seats more often than not.

The action is also highlighted by a super cool electronic score by Basement Jaxx which really puts you in the right frame of mind. I definitely recommend buying the soundtrack once you have watched this movie. I myself didn’t even hesitate in purchasing a copy. That’s how much I like this kind of film music.

The summer 2011 movie season was mostly disappointing due to a lack of creativity and inspiration as many of the blockbusters were cynically made by studios with the intention of making money while giving audiences what they thought they wanted. Watching “Attack the Block” though is a great reminder of how much fun it can be to go to the movies, and it was one of the best action movies to come out that year. This is a must see.