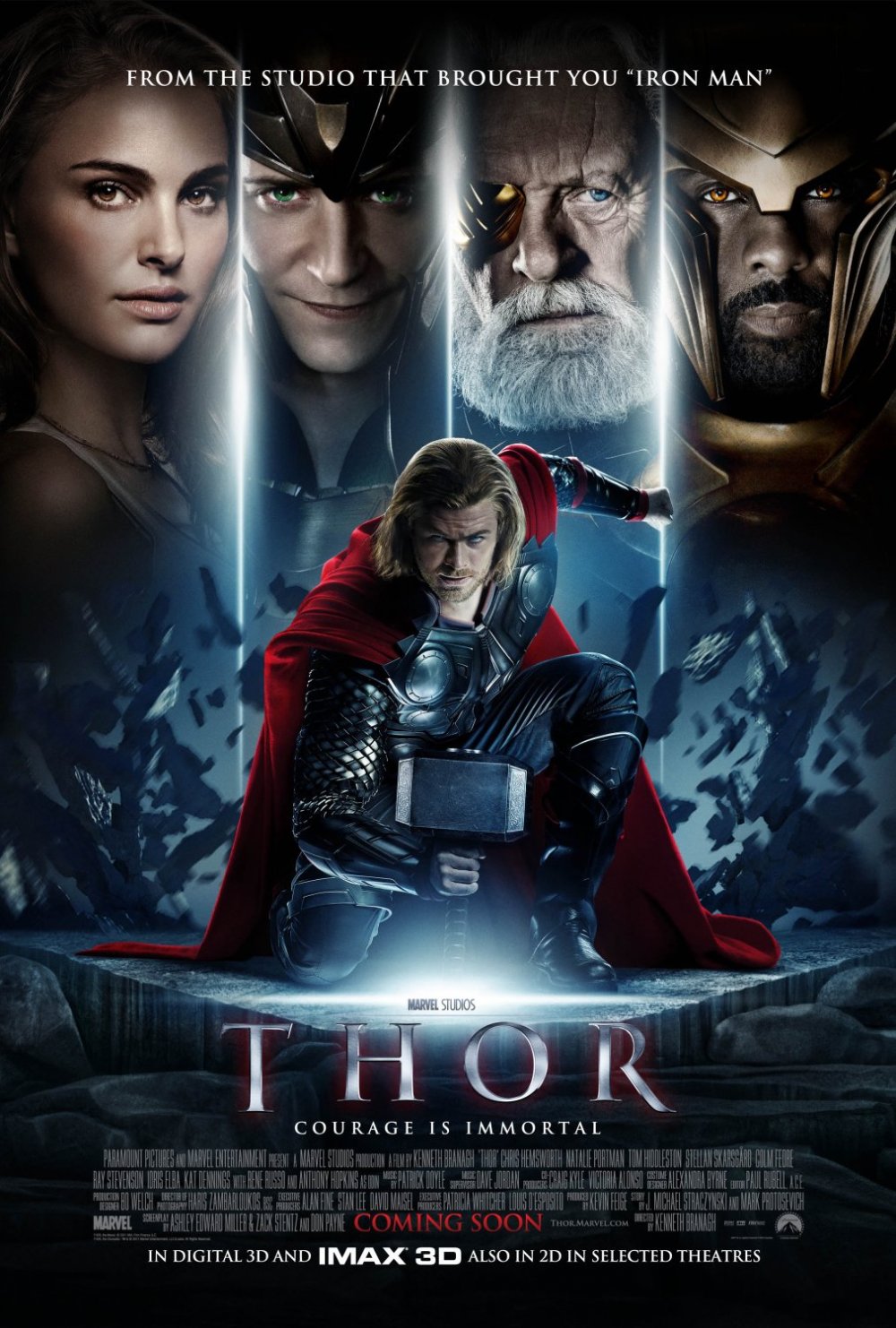 “Thor” makes its presence known with thunderous abandon. Now like many comic books, this one is yet another I haven’t read, so I can’t say how true it stays to its origins. However, judging from the great Kenneth Branagh’s handling of the material, I imagine it’s very respectful to the character.

Heeding closely to classic Norse mythology, Thor is the god of thunder and heir to the throne of Asgard. But on the day of his ascension, the Frost Giants invade the planet’s deeper regions to retrieve the Casket of Ancient Winters, the source of their power. They are easily defeated, but their violation of the truce put together between them and Asgard seriously pisses Thor off. Against his father’s wishes, he and his fellow warriors journey to the Frost Giants home planet of Jotunheim to keep some frosty ass. Odin, however, intervenes and, infuriated with his son’s arrogance, strips him of his powers and banishes him to Earth. For a warrior like Thor, being banished to Earth does feel like a nasty insult.

First off, I really liked the way Branagh handled this material. In the wrong hands, this could have easily become high camp which would have been enjoyable for all the wrong reasons. But Branagh takes the characters and places they inhabit seriously, and he infuses them all with a strong humanity which comes to define them more than does their place in the universe. Even the villains are remarkably complex as their corruption results not so much from a need for power, but instead for a father’s love and approval. Of course, with Branagh directing, you can count on many Shakespearean references throughout, be it Iago from “Othello” or “King Lear,” and they prove to be a perfect fit for this movie.

I was also impressed with how well Branagh handled the visual elements of “Thor.” The last time he made a movie heavy with special effects was “Mary Shelly’s Frankenstein,” and he seemed a bit out of his league with that one. Perhaps we should not be impressed as this movie has a budget of at least $100 million, not counting advertisement costs, but the key thing here is the effects succeed in being an extension of the characters instead of just dwarfing them completely. Then again, that giant creature the Frost Giants unleash on Thor immediately had Liam Neeson screaming in my head, “RELEASE THE KRAKEN!!!”

As Thor, Chris Hemsworth, who played Captain Kirk’s father in J.J. Abrams’ “Star Trek,” owns the role right from the first moment he walks onscreen. Hemsworth clearly revels in portraying the great power Thor possesses, and he is a gentleman when the situation calls for it. Seeing him as a fish out of water on Earth also makes for some splendid moments which are slyly comic. I’m also glad to see Thor is not just another character who doesn’t want to be “the one,” conflicted about the things he is destined to do. With Hemsworth, you know from the get go he is fully aware he’s “the one” and owns this knowledge to where you feel his impatience in wanting to prove it to the universe. Instead of a whiny Anakin Skywalker, Hemsworth gives us a powerful warrior worth cheering for, and one who eventually learns from his mistakes.

As scientist Jane Foster, Natalie Portman’s casting in the role seems like a no brainer. We know from her off screen life that she is a remarkably intelligent human being, so she doesn’t have to prove to us how believable she can be as a scientist. She sparks instant chemistry with Hemsworth (damn those six pack abs!!!), and that shy smile of hers kills me every single time.

Then there’s the great Sir Anthony Hopkins whose portrayal of Asgard’s king and father to Thor, Odin, is nothing short of gallant. This is especially the case with the opening narration which he recites with such depth to where he makes all other actors who’ve done it before him sound like they were sleepwalking their way through it. While many may think this is one of those roles Hopkins did for an easy paycheck, it’s really one of the best performances he’s given in a while.

Tom Hiddleston plays Loki, Thor’s brother and the movie’s main villain. What I liked about Hiddleston is how he does so much more than give us the usual one-dimensional bad guy. Just like Joaquin Phoenix’s character from “Gladiator,” Loki feels slighted by his father as he prefers another man over him, and he becomes desperately eager to prove himself in any way he can. But of course, he ends up doing it in the worst way possible. Hiddleston makes Loki into a character who is more spiteful than hateful, and this makes his eventual fate seem all the more tragic in retrospect.

There are other strong performances throughout this blockbuster affair to enjoy as well. Rene Russo, where have you been? Idris Elba makes a memorable Heimdall, and it never seems like a small part with him playing it. Kat Dennings steals a few scenes as Darcy Lewis, Jane’s co-worker whose science is more political than astronomical. And Stellan Skarsgård remains a dependable actor as always playing scientist Erik Selvig, a character who ends up playing an important role in “The Avengers.”

Having said all this, “Thor” did feel like it could have been a little more exciting. It doesn’t quite have the same invigorating sweep as some of Branagh’s Shakespeare adaptations like “Hamlet” or “Henry V,” and it takes longer to get to the action than it should. It’s not quite as entertaining as “Iron Man,” but I would definitely rank it above “The Incredible Hulk.”

Regardless, there is still much to like about “Thor,” and Branagh has done the best job anyone could have in bringing this particular comic book hero to the big screen in such a respectful fashion. It also benefits from excellent casting, especially Hemsworth who looks like he came out of the womb looking like a warrior with a mighty hammer in his hand. This is one of the few times where “getting hammered” will sound more like a threat than an embarrassing state of drunkenness.