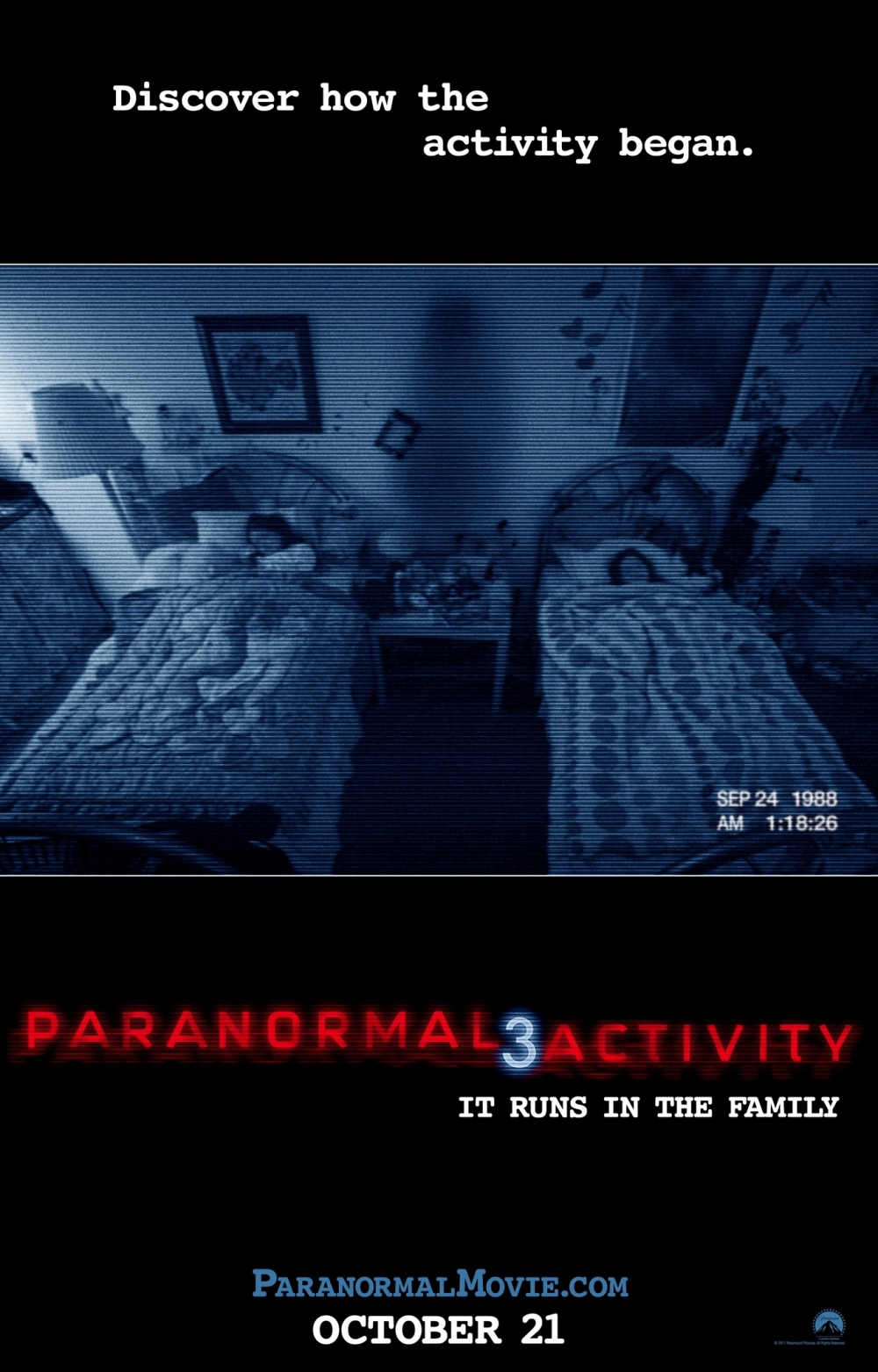 In a lot of ways, “Paranormal Activity 3” shouldn’t work. It’s the third movie in an astonishingly popular series which eventually replaced “Saw” as the official franchise for the month of October each year. The third in a trilogy is also when the series starts running out of creative juices and becomes bound by an increasingly worn out formula. Maybe it’s time to move on to the next big thing in horror, right? Not quite.

Despite the inescapable feeling of déjà vu, “Paranormal Activity 3” still has the power to scare and unnerve viewers, and I knew exactly what I was doing when I watched it at night. This one comes from the makers of “Catfish,” and they follow the familiar found footage setup to where nothing may be new, but they still generate a number of jump-out-of-your-seat moments which will freak out even the most jaded of moviegoers.

Whereas “Paranormal Activity 2” was a prequel and a sequel, this third movie is a flat-out prequel which takes place 18 years before the events of the original. Sisters Katie and Kristi, played by Katie Featherston and Sprague Grayden in the previous films, are seen here as children who live with their mother Julie (Lauren Bittner) and stepdad Dennis (Christopher Nicholas Smith). Things get weird, however, when Kristi gets an invisible friend named Toby, and strange occurrences develop in their home with increasing volatility.

Since this prequel takes place in 1988, the filmmakers get to work technology now seen as prehistoric as this was a time of video cameras and VHS tapes. Part of it serves as a needless reminder of how Betamax got its ass kicked years ago. While the technology is limited compared to what the characters had at their disposal in the previous films, this forces everyone here to get creative with what they have.

Once again, the man of the house (and it’s always the man) sets up a barrage of video cameras in various rooms to figure out what craziness is going on in order to put a stop to it. The only disadvantage is VHS tapes only allow for 6 hours of recording at the most. But somehow the spirits do make their appearance before the tape runs out which is rather convenient for everyone involved.

The one new thing in “Paranormal Activity 3” is how Dennis comes up with the idea of attaching one video camera to the base of a fan. As the camera veers from side to side, we have another reason to be tense about what we’re watching. Will there be something on the other side about to jump out at us? This quickly becomes a clever device which distinguishes this film from its predecessors.

“Paranormal Activity 3” does, however, get off to a shaky start. There were a bunch of cheap scares which, whether they worked or not, had me worrying this prequel would be overrun with them. While they provided the audience with a several good jolts, it made me wonder if the series was beginning to descend into self-parody. Once this happens, the series might as well end. Fortunately, things straighten out as the happenings inside the house become increasingly unrelenting in their viciousness.

There are many moments which had my hair standing on end. We see furniture moving around by itself, a character running into something not visible, and someone’s hair getting grabbed. “Paranormal Activity 3” may seem like business as usual, but this business is still producing terrifying moments just as things are beginning to look old. Like the previous entries, I’m not entirely sure how the filmmakers pulled off certain special effects (the one at the very end is very painful to witness), and I don’t want to know for fear of breaking the illusion.

I recently watched “The Thing” which was a prequel to John Carpenter’s 1982 film. It reminded me of the problems with prequels in general as you know from the start who is going to live and die, and the suspense gets diluted as a result. The advantage “Paranormal Activity 3” has is, while we know the little girls will survive and live on in future installments, we aren’t sure what the fate of the adults will be. Katie and Kristi only reveal so much about what happened to them as children in the second film, so we are left to guess if any adults hanging around these kids will ever live to see tomorrow. Had the girls revealed the exact chronology of events, this prequel would have been screwed from the get go.

Many critics have voiced that they have had their fill of the “Paranormal Activity” films it, but the formula behind them still works very well and has me pinned to my seat. That invisible spirit can still scare the crap out of me, and it made me look forward to “Paranormal Activity 4.” Granted, Paramount Pictures and Oren Peli can only keep this franchise going for so long, but they have made it this far without losing any of the power which made the original so damn scary. Here’s hoping the filmmakers don’t trip over themselves in the future. We all know what happened to “Blair Witch 2: Book of Shadows.”

By the way, you’ll never look at a Bloody Mary (the drink I mean) the same way after this prequel is over. Watch the movie and you’ll see what I mean.