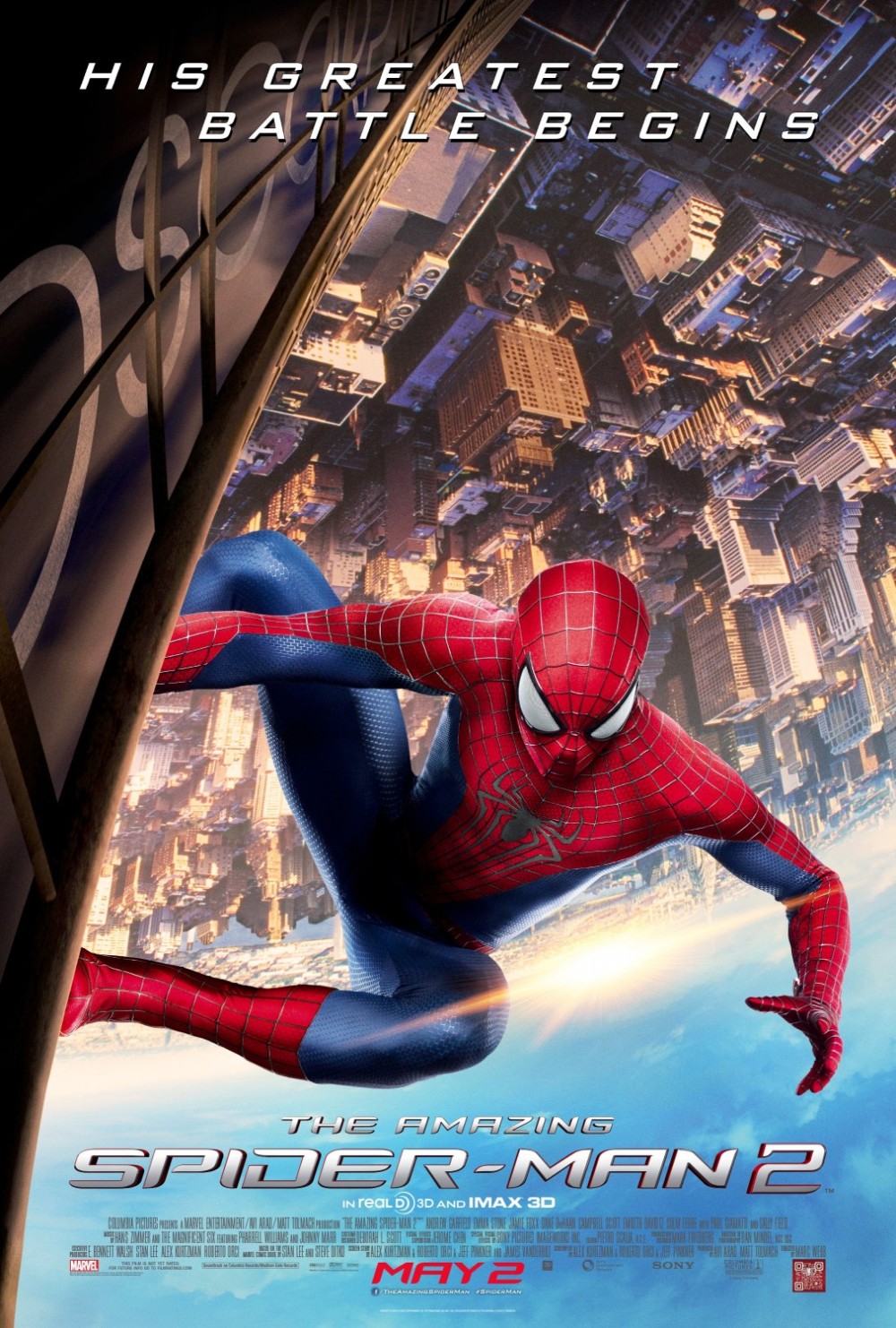 I figured after “Spider-Man 3,” movie studios and filmmakers would think twice before putting three villains in a film, but lo and behold they have done it again with “The Amazing Spider-Man 2,” a sequel to the surprisingly successful reboot which wasn’t necessarily needed so soon. Director Marc Webb is forced to deal with a story that doesn’t have much of a focus and contains too many characters for it to deal with. What results is a incredibly underwhelming superhero movie which plays more like a two-hour plus trailer for other movies, and while this is the fifth “Spider-Man” film in just over a decade, my disappointment with this one has little to do with franchise fatigue.

Not much time has passed since the events of “The Amazing Spider-Man,” and we find ourselves catching up with Peter Parker/Spider-Man (Andrew Garfield) and Gwen Stacy (Emma Stone) as they are graduating from high school. Of course, Peter is delayed a bit as his alter ego of Spider-Man has to fight crime when Russian mobster Aleksei Sytsevich, who will later be revealed as Rhino, tries to drive out of New York City with a case full of plutonium vials. Paul Giamatti plays Aleksei and he clearly is having a blast playing such an over the top character, but he’s barely in the movie. We see him at the very beginning and at the end, but nowhere in between.

This brings me to one of my major gripes with superhero movies today. Studios are so insanely desperate in starting the next big franchise to where they already have at least two sequels planned before their big tent pole movie is even released, and it has gotten to where everyone has forgotten how to make a self-contained movie. Rhino is basically here to act as a bridge to the future spinoff “The Sinister Six,” and it ends up taking away from a movie which already has way too much on its plate.

Then we get to meet Max Dillon, an electrical engineer who is invisible to everybody and has no real friends. But after a freak accident lands him in a tank full of genetically modified electric eels, he quickly mutates into an electric generator of a monster who calls himself Electro. Jamie Foxx plays this character who is considered one of the greatest villains in comic book history, and his performance in a way reminded me of Jim Carrey’s in “Batman Forever” where he played Edward Nygma/The Riddler. Both characters come to idolize the heroes which dominate their lonely lives, but when they feel betrayed by those same heroes, the affection they have toward them is revealed to be a deep-seated resentment that soon evolves into sheer anger.

Foxx is a terrific actor and this role could have given him a number of great avenues to explore, but once again this movie has too much to deal with which results in Max Dillon/Electro not getting enough screen time. In fact, Electro ends up disappearing for a good portion of the movie to where you wonder if he’s disappeared for good. When he does come back onscreen, he’s reduced to spewing out a lot of lame one-liners I kept thing were rejected from “Batman & Robin.” Electro could have been one of the most memorable villains to appear in movies this year, but instead he turns out to be one of the lamest.

Next, we come to villain number three which is Harry Osborn/Green Goblin who has just inherited his late father’s business, Oscorp Industries. Played by James Franco in Sam Raimi’s “Spider-Man” movies, he is portrayed here by Dane DeHaan who has made quite the name for himself after his acting triumphs in “Chronicle” and “Kill Your Darlings.” DeHaan does excellent work as Harry in portraying his manipulative control over his newly acquired board of directors, and he makes us feel his desperation to escape the same fate which befell his father. But when DeHaan becomes the Green Goblin, he goes from giving one of the best performances in “The Amazing Spider-Man 2” to one of the worst as his acting is reduced to hissing a lot at people. Don’t even get me started on his makeup because it made me miss that cheap looking mask Willem Dafoe was forced to wear in the first “Spider-Man” movie.

So, is there anything which works in “The Amazing Spider-Man 2?” Well yes, the scenes between Andrew Garfield and Emma Stone which continue to be the best parts of this rebooted franchise. Whenever they are together onscreen, the movie comes to life in a way that doesn’t require a single special effect. Like Tobey Maguire before him, Garfield understands what makes Spider-Man such a relatable superhero as, aside from his amazing superpowers, he is a really down to earth guy who has problems like everybody else. As for Stone, she makes Gwen Stacy a wonderfully intelligent human being and the appealing girlfriend many of us hope to have.

Seeing them together also reminded me how Webb directed one of the best romantic movies of recent years, “(500) Days of Summer.” While his handling of this superhero franchise has become shoddy, he really does know how to direct actors to where their intimacy feels ever so genuine. I hope he goes back to directing character dramas very soon.

Actually, when it comes to the failure of “The Amazing Spider-Man 2,” I find myself blaming Sony and Columbia Pictures more than I blame Webb. In trying to make a hugely entertaining movie, everyone involved got so caught up in setting the stage for future sequels and spinoffs to where this feels like a coming attraction for something far more entertaining. Yes, there are some fantastic special effects on display here which look great in either 2D or 3D, but even they can’t lift this movie out of the muck. There’s never a shortage of fights, explosions and chases, and maybe that’s the problem. While Webb is looking to unlock his inner Michael Bay here, this sequel ends up getting robbed of much of its soul.

I really hate it when history repeats itself, be it in the real world or at the movies. Maybe you can get away with two villains in a movie, but you should not have three. “Spider-Man 3” and “Iron Man 2” should have taught us all this, but some people just don’t listen. Seriously, haven’t we learned anything? Are we destined to keep repeating the same mistakes over and over again?