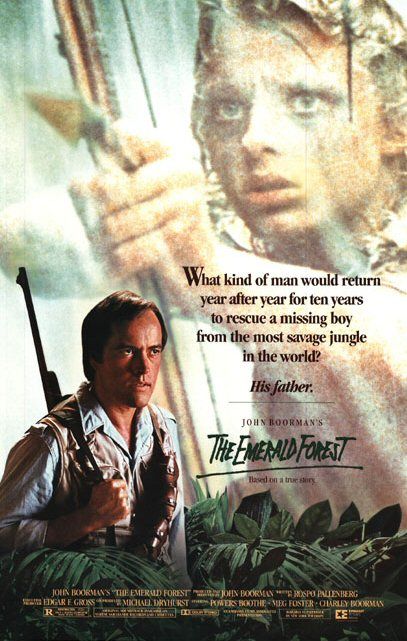 “The Emerald Forest” is kind of a spiritual sequel to “Deliverance” as both were directed by John Boorman. Each film deals with man’s tearing apart of nature for their own needs, and of how nature has its own set of rules which forces outsiders to survive by any means. They also take place in a wilderness where the rules of law and justice cease to exist as its inhabitants live defend what is theirs and are not exactly open to strangers. Also, they contain characters who have never been exposed to civilization as we know it. The subject of man versus nature makes for a fascinating subject, and it’s entertaining to see Boorman take it on again.

“The Emerald Forest” is “based on a true story” and was released back in 1985, back when that term actually meant something. Powers Boothe stars as Bill Markham, an engineer who has moved to Brazil with his family to complete the construction of a large hydro-electric dam. This of course necessitates large areas of the Amazon forest be cleared to make room for agriculture and living space. While on a picnic with his family, his son Tommy suddenly gets abducted by an indigenous Indian tribe. Bill ends up spending the next ten years looking for Tommy just as the dam he’s working on nears completion. He ends up finding Tommy alive, and Tommy has long since become fully integrated with the tribe known as the “Invisible People.” But will Tommy end up going home with his real dad, or will he stay with this tribe which he considers family?

I remember seeing commercials for this movie on television, and the fact it was “based on a true story” made it seem all the more frightening at the time. To be stolen from your family is a terrible fate and a horrible burden for any parent to endure, and it’s the last thing anyone should go through. The interesting aspect of “The Emerald Forest,” however, is how Tommy seems to enjoy being part of this tribe which has given his life a meaning it wouldn’t necessarily have in the real world. This makes the conflict between Bill and the tribe especially fascinating; he’s entitled to be angry at these people for kidnapping his son, but it’s not like his son has been treated badly by the tribe. Issues like this are usually black and white, but in this movie, they come to inhabit a morally gray area.

In the process of looking for his son, Bill comes across a rival tribe known as the “Fierce People” whose leader shows his admiration for the hunting skills he shows off with his machine gun, a weapon they are unfamiliar with. As a result, they give him a head start to run for his life before they hunt him down. He is fortunate enough to run into Tommy who has long since become a warrior like the Indian family which “adopted” him, and he takes his father to safety where the “Invisible People” can take care of his wounds.

The scenes showing the tribe and the rituals they perform are among the most fascinating scenes in “The Emerald Forest.” Boorman really makes us feel like we are observing something we would not be likely to see in person as we watch Tommy becoming a man. These are not just a bunch of actors trying to recreate what tribes of Indians did before and after white men stole their land, they look like the real deal. Plus, their description of Bill and those like him as “Termite People” as, like those pesky creatures, they destroy the land they come in contact with gets at the universal truth of life: Man’s attempt to create a new way of life ends up laying waste to our past.

Actually, the one actor who deserves the most credit here is the director’s son, Charley Boorman, who plays Tommy. Much of the movie’s success really hinged on his performance as a stranger to the world he has been abducted to. If you didn’t believe how sincere Tommy was to win the tribe’s respect, then “The Emerald Forest” would never have worked as a movie. But Charley is utterly believable and sucks you into his character’s reality without a second thought. It’s one of those performances where the actor becomes his character as opposed to just playing them.

Boothe was one of those actors who are impossible to cast as a wimp. I mean you could, but would you believe him in such a role? He’s always played tough guys who never go down without a fight, and here he plays a good guy who is no different. It’s hard to think of another actor who could have embodied Bill Markham better than him. Perhaps Sylvester Stallone or Arnold Schwarzenegger could have, but casting either of them would make this become a completely different movie.

Boothe not only has to show the intense dedication this father has in finding his son, but he also has to believably portray a man who is more of a match with the wilderness elements than any other stranger to this environment. He succeeds on both fronts as the tribe accepts him despite their differences with one another, something which isn’t easy. The actor also has to convincingly portray a man who has to go against what he does for a living to protect his son and his way of living. Looking at this makes you realize just how underrated, or perhaps largely underappreciated, an actor Boothe was while he was alive.

Boorman, along with cinematographer Philippe Rousselot, provides the viewer with beautiful scenery throughout. Much of it was filmed in Brazil, and we get to see sights which, all these years later, may not even exist anymore. Just as with “Deliverance,” Boorman wants to explore this part of life before it vanishes forever, and he was lucky to get any of it on film.

Like any movie “based on a true story,” much of “The Emerald Forest” has been fictionalized for dramatic considerations. This results in it having a shootout in which Boothe has to team up with the tribe which took his son so they can rescue their women who have been stolen into slavery. In some ways, it feels like a cop out for the movie to reach its conclusion, but it does have the added bonus of them dealing with another Indian tribe whose ignorance of guns has been exploited to their benefit. It seems to imply how any person who encounters the real world is more likely to corrupt themselves than advance their way of life. This ends up saving “The Emerald Forest” from turning into any other action movie.

John Boorman’s career as a director has taken him all over the critical map from classics like “Deliverance” and “Hope and Glory” to duds like “Zardoz” and “The Exorcist II: The Heretic.” “The Emerald Forest” stands in the middle of all his movies as it’s really good if not quite great. I’m glad I finally got the opportunity to see it even though it took me almost 30 years after its release to do so. It’s also nice to watch a movie “based on a true story” which actually feels like it is. These days, the term is meaningless as it has been used once too often, but back when this movie came out, it meant a lot.