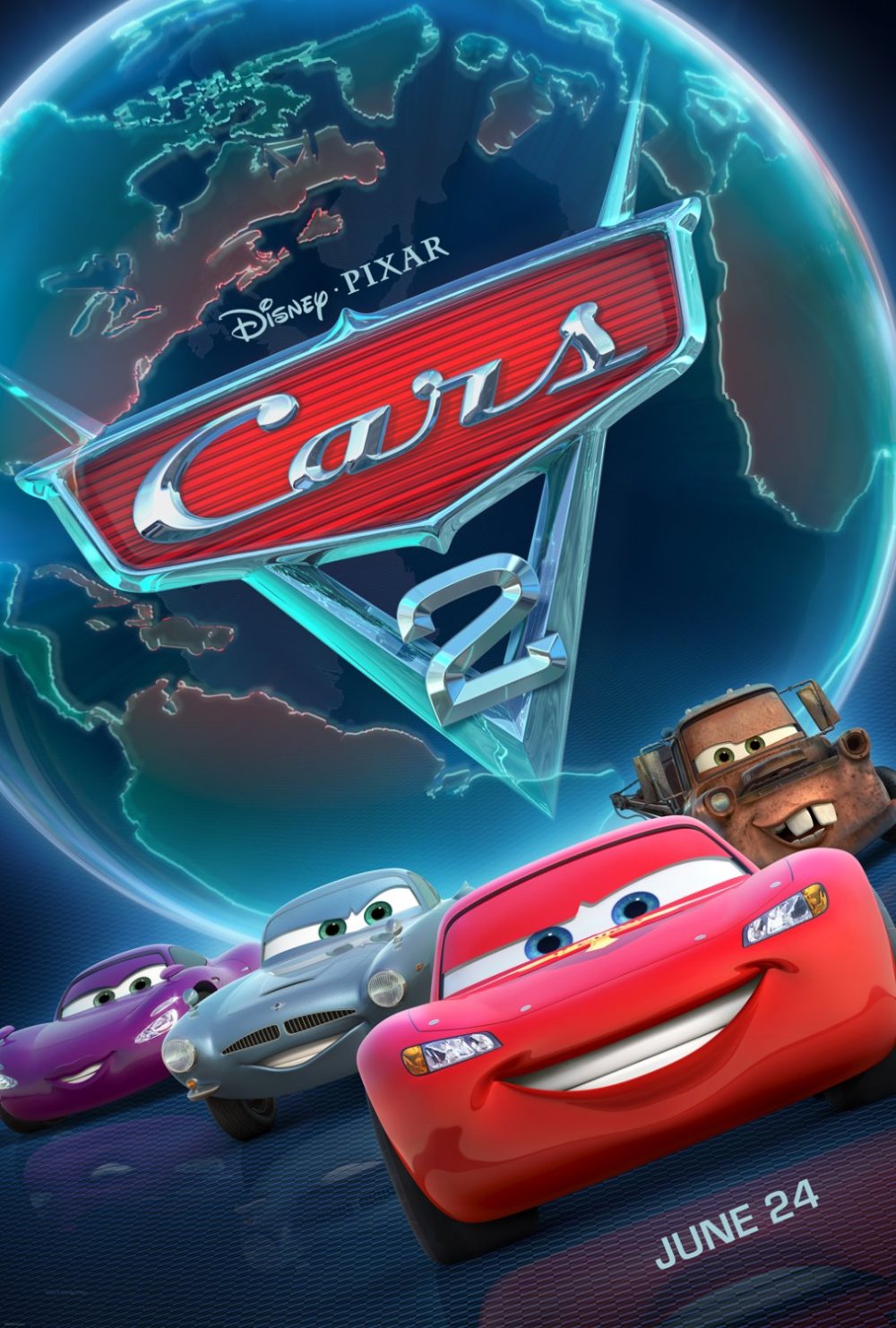 I’m a little befuddled at the critical notices being hurled at “Cars 2.” It’s the first Pixar movie to ever get a rotten score on Rotten Tomatoes. Granted, neither this sequel nor its predecessor represent Pixar at its best or most adventurous, but even the least of their movies are infinitely better than most of what Hollywood puts out. “Cars” was essentially an animated “Doc Hollywood,” but as predictable as the story was, it was still wonderfully entertaining and had many memorable characters. Its being made was also worth it just to hear my niece say “ka-chow!” on a regular basis.

But “Cars 2” is easily more fun because the story is not as formulaic as its predecessor’s, and it takes the characters in a refreshingly different direction. This one has Lightning McQueen (Owen Wilson) going with his best friend Mater (Larry The Cable Guy) to the World Grand Prix to race against the arrogant Italian Formula One car named Francesco Bernoulli (John Turturro). During this time, Mater is suspected of being a spy by British Intelligence officers Finn McMissile (Michael Caine) and Holley Shiftwell (Emily Mortimer), the latter whom he takes a strong liking to. What starts off as another racing movie turns into an espionage adventure which circles the globe in an amazingly animated style.

Make no secret, “Cars 2” truly belongs to Mater more than anyone else. I’ve never been a huge fan of Larry The Cable Guy or his kind of humor, but he’s great fun here. Mater is not the brightest car in the world, but his heart shines through everything he does even as it continually gets the best of him. Most of the movie’s funniest scenes come from him dealing with customs unlike those in his home country, and his mistaking wasabi for ice cream is funnier than anything I saw in “Bad Teacher.”

Pixar continues to outdo itself in the field of animation, and the visuals they come up with are brilliant. I’ll go even further and say there were times I stared at the screen and wondered if certain things being shown were actually real instead of animated. Seriously, the resemblance between what’s real and what’s not disappeared for me at certain points,

Directing “Cars 2” is John Lassiter, and this marks the first full length Pixar film he’s directed since the original. His love of all things cars is as evident here as it was in the first film, and he also has race car drivers and announcers like Jeff Gordon, Lewis Hamilton, Darrell Waltrip, Brent Musburger, and David Hobbs voicing characters. You don’t even have to look at, or listen, hard to discover which characters they are voicing as character names are not particularly subtle. For example, we have Jeff Gorvette, Darrell Cartrip, Brent Mustangburger, David Hobbscap, and the subtlest of all, Lewis Hamilton.

I loved the addition of Michael Caine to this sequel as he makes Finn McMissile a cross between James Bond and the character he played in “Get Carter.” Years after playing Jack Carter in the 1971 classic, Caine remains as cool as ever, and not just because his car has an endless number of gadgets Bond could only wishes he had in the real world. His cockney accent is welcome in any movie he does, and this is certainly the case here.

Other additions in this automotive universe include Emily Mortimer who makes Holley Shiftwell tough and sensitive in believable fashion. Mortimer is such a sweet presence in movies like this and “Lars and the Real Girl,” and I always look forward to seeing and hearing her in any movie she does. It’s also great to have Cheech Marin, Jenifer Lewis, Tony Shalhoub, Joe Mantegna, and Bruce Campbell among others on board, and listening to them made me believe they had a blast working on “Cars 2.”

If I had any issues with “Cars 2,” it’s in regards to the character of Fillmore. This really has to do with the fact George Carlin voiced him in the original, and he has since passed on, and that Fillmore has little to do other than to say, “Wow man!” Out of respect for the late Carlin, who I still miss, I wished they had retired the character. This is nothing against Lloyd Sherr who has the unenviable task of replacing one of the great comedians ever as Fillmore, but this is one Pixar character which should have been put to rest. They retired Paul Newman’s character of Doc Hudson as he has also passed into the great beyond, and no one could have replaced him. I mean, I can understand why Pixar kept Slinky Dog on board for “Toy Story 3” even though Jim Varney died long before filming started, but Slinky had more to do in that sequel than Fillmore does here.

“Cars 2” does not equal Pixar’s artistic highs of “Up,” “Ratatouille,” or “Wall-E,” but so what? All that matters is it’s fun, and it easily outdoes the original. While its messages like the importance of being true to yourself may seem cheesy from a distance, they are handled here with a lot of heart and genuine emotion. Whatever you thought of the first one, you have to admit that you cared about the characters, and you will care for them even more in this sequel.

You can waste your money on “Green Lantern,” or you can take the family out to this one. The kids will be restless and noisy whether we like it or not, but I’m used to that by now. I saw “Cars” at the El Capitan Theatre in Hollywood, and parents were incapable of shutting their children up there. That I did not make the same mistake with this sequel is largely why it’s getting a particularly high rating.