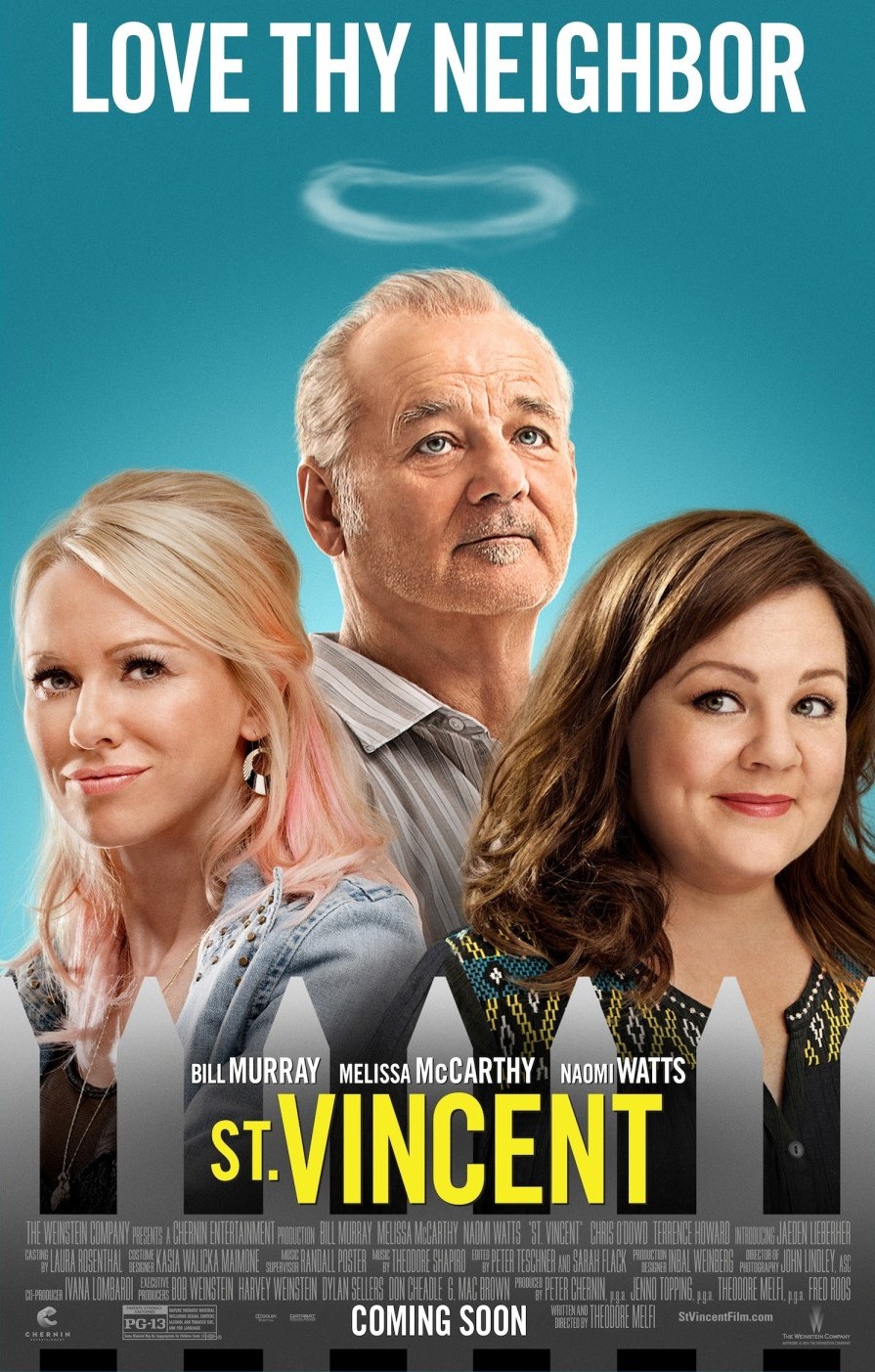 Leave it to “Saturday Night Live” alum Bill Murray to play the ultimate sad sack loser whom you manage to find some empathy for. Other great actors have played this kind of role to great effect like Al Pacino, Gene Hackman, and Billy Bob Thornton, but I am convinced after watching the movie “St. Vincent” that no one does it better than Murray. Even if the character he plays appears to be an irredeemable jerk, Murray still makes you see there is at least one redemptive quality in this infinitely cynical soul.

Murray plays the Vincent of the movie’s title, but he doesn’t look anything like a saint when we first meet him. We see him getting liquored up frequently and betting on the horses, and he clearly he has more luck getting drunk than he does at gambling. Then he comes to discover he is beyond flat broke (there is such a thing) as he borrowed money against his house to an alarming degree, and a local bookie named Zucko (Terrence Howard) informs him he has a serious debt to pay.

We watch Vincent dance all by himself to Jefferson Airplane’s “Somebody to Love,” and we can’t help but wonder if he cares if anyone loves him in the slightest. In case you haven’t noticed, Vincent is not the nicest person to be around.

As his troubled times ramble on, Vincent suddenly discovers he has some new neighbors which include the recently divorced Maggie (Melissa McCarthy) and her 12-year-old son Oliver (Jaeden Lieberher). They don’t get off to a good start as their moving van accidentally hits a tree and damages Vincent’s fence and his “antique” car. Vincent doesn’t seem the slightest bit interested in giving them a warm welcome as he is in getting reimbursed for the damage done, but when Maggie finds herself forced to work long hours, she has no choice but to let Vincent babysit Oliver while she’s away.

Vincent’s idea of taking care of Oliver includes going to the racetrack where his luck with the horses changes dramatically, and he teaches Oliver to defend himself which comes in handy when he has to get back at the school bully. Now these are not the kind of things you teach a child, but it helps break the ice between them to where they come to enjoy each other’s company.

Murray does not need to win an Oscar to show us all what a great actor he is because we have known this for years now. His performances in “Rushmore,” “Lost in Translation” and “Groundhog Day” show just how far his range stretches, and he does wonders with a character we would be quick to hate in real life. Even when “St. Vincent” becomes a little too sentimental for its own good, Murray never fakes an emotion and we feel for him regardless of how he treats others. The sad look in his eyes speaks volumes and tells us what we need to know about Vincent without him having to spell it out for everyone.

It’s also nice to see Melissa McCarthy in a good movie for a change. Ever since her brilliant supporting turn in “Bridesmaids,” she has been stuck doing solid work in bad movies like “Identity Thief” and “Tammy,” but here she is served by a good script and a role which allows her to take a more serious turn. She’s wonderful here as Maggie, a single mom who’s doing the best she can under difficult circumstances, and she scores some funny moments as well, especially when it comes to a certain plant.

Seeing Chris O’Dowd play Catholic school teacher Brother Geraghty is amusingly ironic as we last saw him as a very anti-Catholic character in “Calvary,” and he is wonderful to watch here. As for Terrence Howard, he has this brilliant ability to take stock characters like the angry bookie and make them seem not the least bit cliché, and his performance as Zucko is yet another example of that. And then there’s Naomi Watts who knocks it out of the park as pregnant Russian stripper Daka, and she gets the accent down perfectly.

But seriously, the performance I was most impressed with in “St. Vincent” was Jaeden Lieberher’s as Oliver as he gives us the perfect example of a child who can see right through adult hypocrisy. It’s such a genuine and unforced performance to where Lieberher inhabits Oliver more than plays him, and he makes this young man come across as smarter and far more mature than the adults around him.

“St. Vincent” was written and directed by Theodore Melfi, and he travels through the familiar “Scent of a Woman” territory to where you have a good idea of where this movie is heading. As I said earlier, it does get a little too sentimental at times, but Melfi throws some interesting twists into the mix I didn’t see coming. I also like how Oliver fights off the school bully and then becomes really good friends with him. It’s not often in movies that you see something like that happen.

When it comes down to it, “St. Vincent” doesn’t reinvent the wheel, but it is very well made and features some truly memorable performances. Will Murray get an Oscar nomination for his work here? Probably not, but that’s because he gives a subtle performance the Academy never appreciates enough. Regardless, he continues to turn in one great performance after another, and his work in this movie is just the latest example.