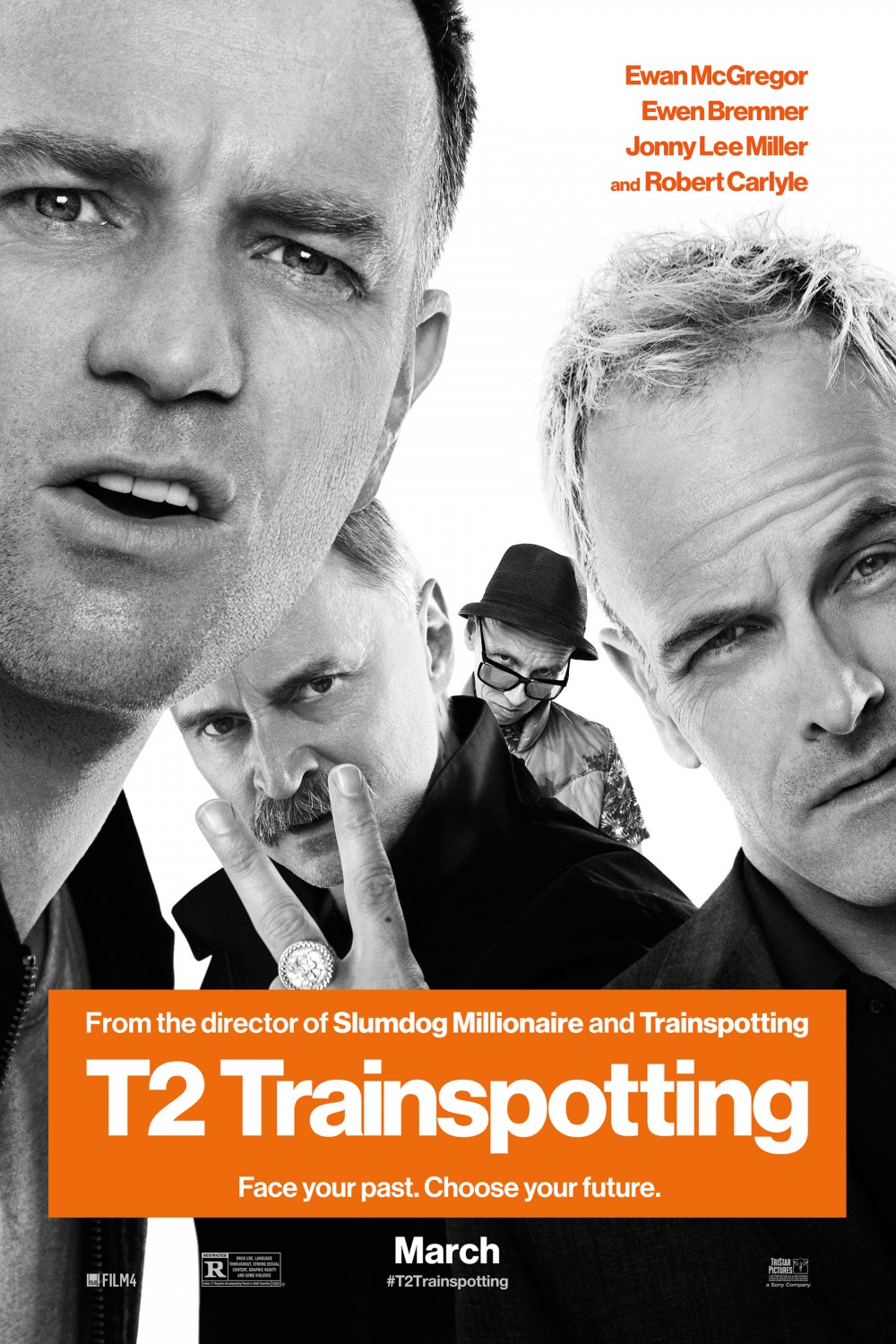 I actually found myself getting choked up while watching “Trainspotting 2,” a sequel I long believed would never become a reality. The original 1996 film featured youthful characters bursting with life as they inject heroin into their veins and create chaos for everyone and each other. Now it’s 20 years later, and these same characters are now middle-aged and struggling with a future which looks to leave them behind. They are dealing with regrets which eat at them, and are still stuck in a past which constantly gnaws at their conscience. While I can’t say I relate to all the adventures Renton, Sick Boy, Spud and Begbie have gone through, I can certainly relate to their current state of mind as their lives are at an impasse to where they have to ask themselves the question David Byrne brought up in a Talking Heads song, “Well, how did I get here?”

When we last saw the “Trainspotting” gang, Renton (Ewan McGregor) had absconded with the money they scored through a heroin deal, and he was determined to go straight and engage in a much more stable lifestyle. “Trainspotting 2” starts with him running on a treadmill only to trip and fall, and it’s enough to show he is not the same man he was before. He has lived in Amsterdam all this time with his wife, but now he is getting divorced and finds his job security to be very shaky, to say the least. Feeling lost in modern society, he decides to return home to Edinburgh, Scotland in an effort to make amends with family and friends.

Everyone is still back in Edinburgh doing their thing. Sick Boy runs a bar which is lucky to have many, if any, patrons walking through the door. In his spare time, he engages in blackmail schemes with his partner and girlfriend, Veronika Kovach (Anjela Nedyalkova). Daniel Murphy/Spud is still in the throes of his heroin addiction which has long since estranged him from his partner Gail and their son Fergus. As for Francis “Franco” Begbie, he has been in prison all this time and just received news that his parole did not go through. So, like any pissed off inmate, he escapes and heads back to Edinburgh to get revenge on those who betrayed him long ago.

When “Trainspotting” came out 20 years ago, it represented a fresh burst of filmmaking energy and felt so different from anything else playing at your local cinema. Director Danny Boyle and screenwriter John Hodge once again take the works of author Irvine Welsh, in this case his novels “Trainspotting” and “Porno,” to create a motion picture pulsating with an energy lacking in so many others out right now. The fact they can’t quite equal the energy of the original is not a surprise as many imitators came in its wake, and what was once subversive now feels much less so. But I think Boyle intended for this sequel to have a different energy for those reasons as things are different now for the characters and ourselves.

“Trainspotting 2” does traffic in nostalgia as several references to the original are made throughout, but it doesn’t get stuck there to where it comes across as a mere copy of what came before. Moreover, Boyle and Hodge show how these characters are stuck in a past they never fully escaped from. I also have to say it is daring of them to show these characters at this stage in their life as Hollywood is typically afraid of ageism more than they would ever legally admit. Just like in “Logan” and “Creed,” we are forced to see what the winds of change have done to those we grew up watching, and it isn’t always pleasant.

It’s great to see Ewan McGregor back working with Boyle, Hodge, and producer Andrew Macdonald. McGregor and had a huge falling out with Boyle when the director handed the lead role in “The Beach” over to Leonardo DiCaprio instead of him, and the two ended up not talking for years. Well, whatever happened is now water under the bridge, and it would certainly be unthinkable for Boyle to replace McGregor with another actor. While Renton has suffered through years of regret and decreased vitality, McGregor still brings much of the same boundless energy to the character as he did before. It’s also a thrill to see him engage in one of Renton’s “Choose Life” speeches, especially since it takes on a much more emotional dimension than ever before.

Jonny Lee Miller continues to bring a wonderfully perverted energy to his portrayal of Sick Boy as his criminal exploits are fueled by bitterness and large doses of cocaine. I was especially taken in by Ewan Bremmer’s portrayal of Spud which is funny and heartbreaking all at the same time. We are constantly reminded of how Spud is harmless to anyone but himself, and Bremmer makes the character’s ever so wounded pride all the more palpable throughout.

My hat is really off, however, to Robert Carlyle as he makes Begbie every bit as explosive and lethal as he did 20 years ago. Some actors lose their edge as they get older, but not Carlyle as Begbie is still a volcanic force of nature you best not be around if you value your physical well-being. At the same time, the actor brings an honest vulnerability to the character which is both unexpected and wrenching. It serves as a reminder of how much acting range Carlyle has. Remember, he went from playing Begbie to playing a loving father in “The Full Monty,” and I had to keep pinching myself to realize it was the same actor playing both roles.

In addition, I enjoyed Anjela Nedyalkova’s performance as Veronika, a working girl who sees right through all the men around her and gets to the truth they have yet to realize for themselves. She brings a confident and sassy energy to this sequel, and she is a strong addition to this strong quartet of actors. It was also nice to see Kelly Macdonald reprise her role as Diane who has since become a lawyer. She kept stealing the show from her male co-stars in the original, and she does it again here.

They say you can never go back, but “Trainspotting 2” shows you can, but never all the way. There is a mournful feel to this sequel, but it’s there for good reason. In watching these characters wonder how they ended up at this point in their lives, we are forced to examine our own lives and wonder how we got here. It’s an unnerving prospect for a movie to offer its viewers, but I’m glad this one did even though it almost left me on the verge of tears. There needs to be time for a re-examination of our lives and desires, and we have to find a way to make peace with our past. Boyle and company understand this, and they never back down from exploring these emotionally complicated themes.

The cast and crew of “Trainspotting” have given us a very worthy follow up to their original masterpiece, and it is backed up by strong acting, a kick ass soundtrack, and the invigorating visuals we can always count on Boyle putting up on the silver screen. Yes, “Trainspotting 2” was well worth the wait, but be prepared for it to take a piece out of you. And remember what Renton says: Choose life and be addicted to something good.