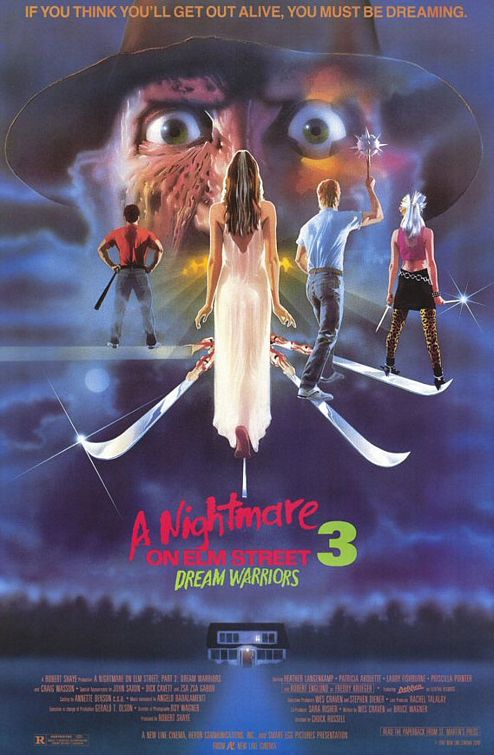 Those little slices of Death

How I loathe them.”

As soon as you see the above quote which opens “A Nightmare on Elm Street 3: Dream Warriors,” you know Wes Craven is back on board in some capacity. After directing the original, one of the all-time great horror classics, he bailed out of the first sequel which he felt betrayed the logic of Freddy Krueger’s character and how he existed in the realm of dreams. This third entry ended up defining the look of the rest of the series until “Wes Craven’s New Nightmare” came along. This one brought forth a Freddy who, while still scary, was more of a stand-up comic with one-liners flying out from his charred face in rapid succession.

“A Nightmare on Elm Street 3” starts off with the character of Kristen Parker (Patricia Arquette, in her film debut) having the first of many nightmares. Freddy’s attack on her is made to look like she tried to commit suicide, and it gets her thrown into a psychiatric hospital with others suffering from serious mental health issues. Of course, when doctors try to give her a sedative to help her sleep, she naturally freaks out and grabs a knife to fight off those who don’t have a clue as to what she’s really up against. This is where she meets up with Nancy Thompson, played once again by Heather Langenkamp.

We learn Nancy has since gone to graduate school where she studied extensively about the nature of dreams. Here she gets assigned to this psychiatric ward where young teenagers are being stalked by the man with razors for fingers. They are being cared for by Dr. Neil Gordon (Craig Wasson) who has long since gained their trust, but he has yet to realize how he can really help them. Nancy sees right away it has everything to do with Freddy, and when she shares this information with the kids they stand at attention and are shocked to realize they have all been dreaming about the same person.

With a budget of around $5 million dollars, the special effects are more impressive than you would expect them to be. It’s always a gas to see what people can do with very little money. There’s one great effect where Freddy comes to life as a marionette, and he immediately returns the favor to its creator by pulling out the veins in his arms to use as strings. Ouch! The sets never reek of cheapness, and the imagination put into this movie is always on display as we see the dreams of the different characters and the forms they each take.

Bringing Craven back to help write the screenplay was a smart move, and he changes the formula to keep it from being just another single kid being chased by Freddy. Also, these kids fight back to stay alive and prepare themselves a lot quicker than the others did in the previous films. One of the screenwriters on “Dream Warriors” is Frank Darabont who later made one of the greatest movies ever, “The Shawshank Redemption.” There is a good amount of work done with the characters here to where they are not your usual one-dimensional horny teenagers which make up the average “Friday the 13th” movie.

The movie also digs deeper into Freddy’s past to make us see how he came to be. Before this film, we knew he was a child murderer who was brought to court but got off on a technicality, and he was later burned by the parents of the town. Dr. Neil Gordon is visited by a mysterious nun who informs him Freddy’s mother, Amanda, was accidentally locked in an insane asylum with the most mentally unstable people one could ever find, or hope to avoid, on the face of the earth. Amanda was raped over and over, and this led to the conception of Freddy who, as the nun puts it, is “the bastard son of a hundred maniacs!” This would make a great title for a movie.

Unlike other horror movies, you care about the characters and what happens to them. Most of these slasher movies have stock characters you hate and root for to die. In all fairness, it makes watching them more fun to watch in a theater, but here the characters, while dealing with obvious stereotypes, are interesting in their own way. Some are geekier than others (don’t get me started on the “Wizard Master”), but they are more real than your average teenagers dealing with ballistic hormones.

“Dream Warriors” is also proof of how wet dreams never end the way we want them to. One of the characters has an understandable crush on a nurse, and he ends up getting seduced by her. Some people get so lucky, but not this kid. What happens to him gives new meaning to the term “tongue-tied.”

Also in the cast is Laurence Fishburne who did this movie before “Boyz N the Hood.” He plays male nurse Max who is one of the more down to earth characters you could ever hope to find in a horror movie. The great John Saxon also returns as Nancy’s father, Lt. Donald Thompson. His character figures prominently in the film’s climax as they find that the only way to defeat Freddy is by burying his remains in consecrated grounds.

It’s hard to believe this was Patricia Arquette’s first film. She has since gone on to a successful career and appeared in great movies like “True Romance,” David Lynch’s “Lost Highway” and “Boyhood” which won her the Oscar for Best Supporting Actress. She creates one of the more sympathetic heroines in a horror movie who has a mother that, of course, does not understand what her daughter is actually going through. No one does initially, but if they did, there wouldn’t be a movie.

And, of course, we have Robert Englund returning as Freddy. In many ways, this was the last “Nightmare” movie where Freddy felt like a truly threatening presence. Just the thought of him was scary, and you didn’t need to show much of him to prove that. After this movie, he became more of a standup comedian than anything else. We had to wait until “Wes Craven’s New Nightmare” for him to come across as a viciously scary presence again. Still, Englund embodies this character in a way no one else could.

While Freddy ended up having an artistic downslide from here, “A Nightmare on Elm Street 3: Dream Warriors” is still one of the best movies in this long-running franchise, and it’s always fun to revisit this entry whenever it is showing on cable.