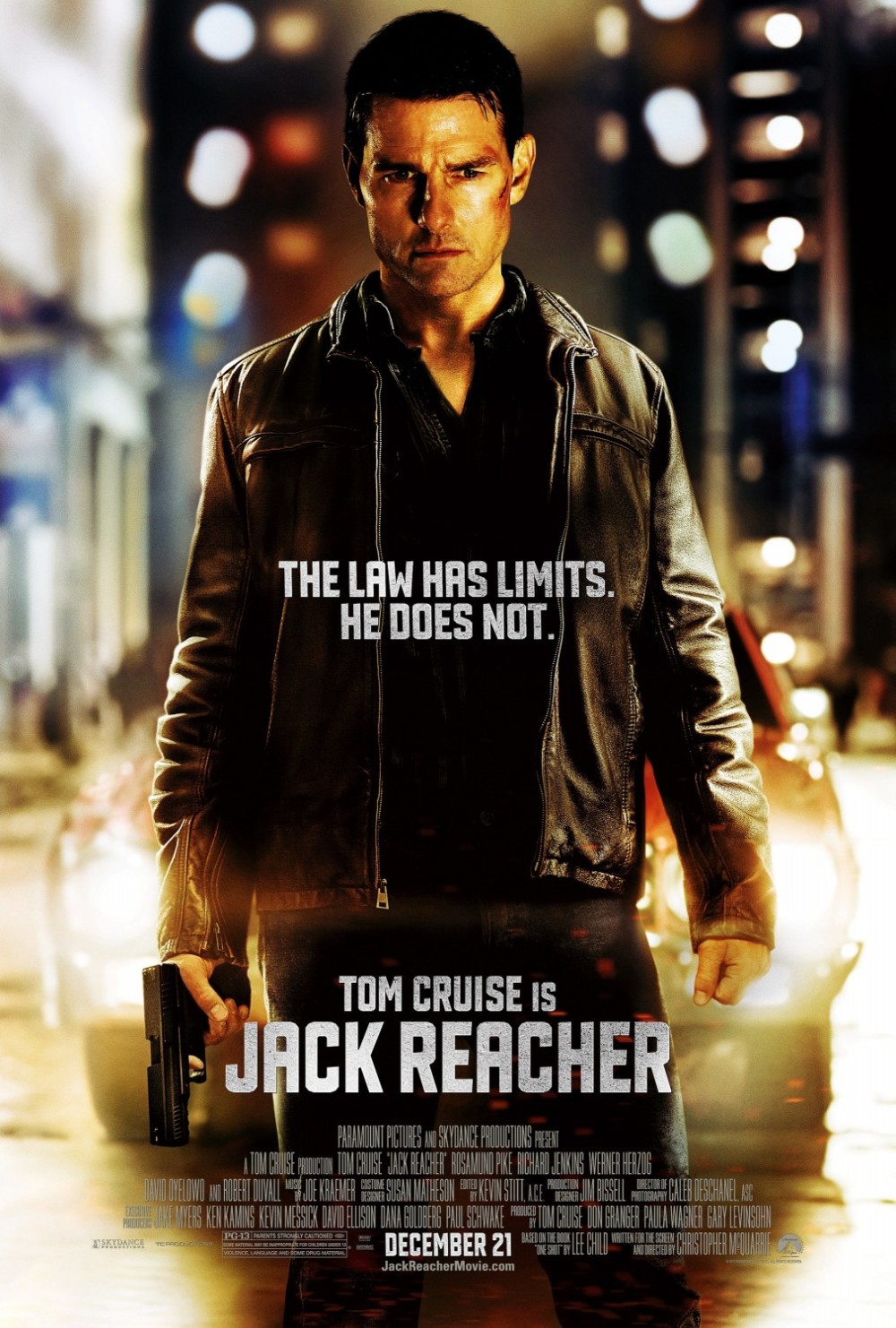 I haven’t read “One Shot” or any of the other books written by Lee Child which feature the character Jack Reacher. At this point, however, I almost don’t need to as the casting of Tom Cruise as Reacher has brought to everyone’s attention how the character is 6’ 5” tall and weighs over 200 pounds. This description makes the role seem far more appropriate for Arnold Schwarzenegger, Sylvester Stallone, Dwayne Johnson or any other athlete turned actor who looks like they live at the gym. So, of course, everyone is snickering at Cruise the same way they did when he was cast as Lestat in “Interview with the Vampire,” but we all know how that turned out.

You know what? I don’t care if Cruise resembles the character or not because he proves to be the best thing “Jack Reacher” has to offer. While he is much smaller and nowhere as muscular as Child’s literary character, he still comes across as an intimidating force to everyone he comes in contact with. His charisma onscreen ends up giving you a reason to check out this movie even though it is surprisingly ho-hum and feels like a business as usual action picture.

Directing “Jack Reacher” is Christopher McQuarrie who won an Oscar for writing “The Usual Suspects” and previously worked with Cruise on “Valkyrie.” He gets things off to a suspenseful and tense start as we watch a sniper looking through his scope at random targets. It’s an unsettling way to start this movie off, and McQuarrie keeps us waiting with anxiety for the first bullet to be fired, and you know it will be fired. The sniper takes out five people and is later caught and interrogated by Detective Emerson (David Oyelowo), but instead of him giving the detective a confession he writes the following message down on a legal pad, “GET JACK REACHER”

Mr. Reacher arrives in town soon after, but not to help his sniper friend but instead bury him. Still, as in many action thrillers, things are not quite what they seem. Reacher has to contend with the sniper’s defense attorney Helen Rodin (Rosamund Pike), her dad who also happens to be District Attorney Alex Rodin (Richard Jenkins), a hired killer and a Russian named Zec Chelovek (Werner Herzog) who everyone refers to as “the Zec.”

Now I know it has been popular to hate Cruise these past few years with his off-camera antics getting more press than his movies, and part of me expected that I wouldn’t take him very seriously in this role. But he really does deliver here and gives a believable performance as a man you really don’t want to mess with. Even in those obligatory scenes where he’s about to beat up a bunch of guys at once, he’s riveting because his eyes tell us and his opponents they don’t stand much of a chance. It’s fun to see Cruise give Reacher an undeniably dangerous vibe, and even at his age he never feels out of place in this role.

It’s a kick to see Werner Herzog show up as “the Zec,” and he makes this villainous character especially depraved as he recounts the unthinkable of what he once had to do in order to survive. Herzog makes the almost unbelievable story he tells sound terrifyingly believable, and his voice continues to serve him well whether he’s narrating one of his documentaries or reading from the book “Go The F—k To Sleep.” It’s a shame he’s not in the movie more than he is.

I also liked seeing Robert Duvall, who starred opposite Cruise in “Days of Thunder,” show up as shooting range owner Martin Cash. These two share a great chemistry together no matter what movie they’re in, and it feels like it’s been forever since I’ve seen Duvall in anything. Like Herzog, I wish he had a bigger part here, but Duvall does make the scenes he’s in count for a lot. This is an actor who can take any throwaway role given to him and make it seem like it’s so much more than what’s on the page.

McQuarrie is a great writer, and not just for creating the screenplay to “The Usual Suspects.” I like how he gives us characters like Reacher and Helen Rodin whose descriptions cannot easily be boiled down into one sentence. And yes, the movie has some great dialogue in it just as it should.

Having said that, “Jack Reacher” comes up a little short for me because there’s not much to distinguish it from other movies of its ilk. Furthermore, it goes on for much longer than it should to where it drags in spots which had me getting a little restless. McQuarrie and Cruise are also unable to escape the clichés of the genre which would easily do in a weaker movie. Maybe it’s because the tone of this film is a little more downbeat than it should be. Both clearly had some fun with this character, but you come out of it wishing they had more fun with the story.

If you can get past the unspectacular aspects of “Jack Reacher,” you might still enjoy the movie for what it is. At the very least we have Cruise’s performance to enjoy as he makes every lethal blow he gives the bad guys hurt like hell. When the movie is finished, you do come out of it wanting to see Cruise take on this role again in the future. But if and when that does happen, let’s hope that potential sequel has a little more edge to it than this one.