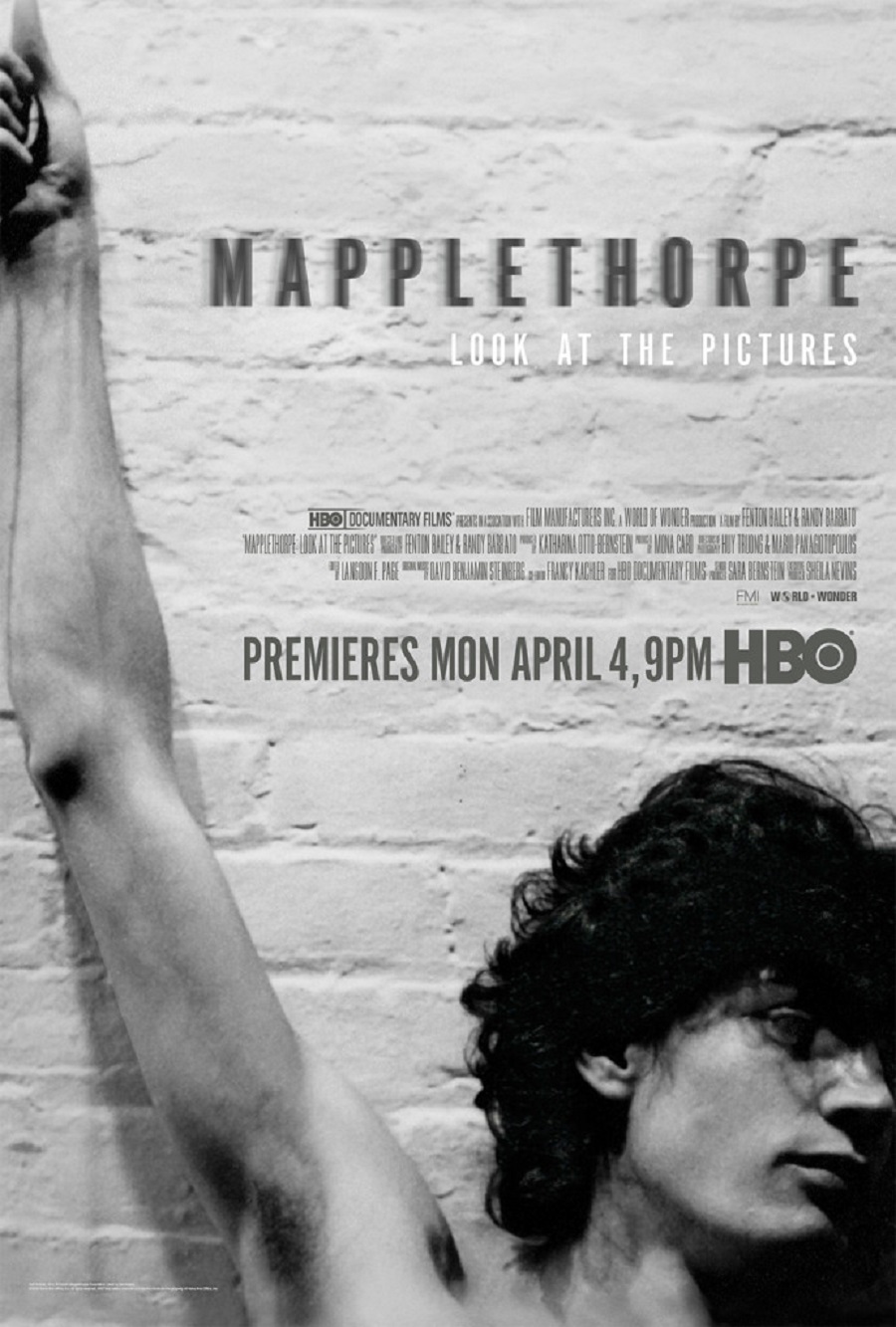 This documentary starts off with former Senator Jesse Helms on the floor of congress back in 1989 where he denounced the controversial photography of Robert Mapplethorpe. Now Mapplethorpe’s work ended up pushing a lot of social boundaries with his frank depictions of sexuality, nudity and fetishism, and since he became known during the age of Ronald Reagan’s moral America, many saw him as nothing more than a shameless pornographer and refused to look at his photographs with any penetrating insight. What was on the surface bothered them, but like with any work of art it is about how the mind perceives it and of the effect it has on your perception of the world around you.

Helms told congress to look at the pictures as if they were done by someone possessed by the devil, but the HBO documentary “Mapplethorpe: Look at the Pictures” invites the viewer to look at them from a less biased perspective and see how this artist managed to turn contemporary art into fine art. What results is a fascinating look at an artist who in some ways is more prolific in death than in life, and it is probably the most in depth look at his life currently available.

We get scenes featuring curators at The J. Paul Getty Museum and The Los Angeles County Museum of Art as they prepare to open a landmark retrospective of Mapplethorpe’s work. Their intent is to look at him as a human being, and that intent is shared by the documentary’s directors Fenton Bailey and Randy Barbato whose previous work includes “Inside Deep Throat,” “The Eyes of Tammy Faye” and “Party Monster” (both the documentary and the feature film starring Macaulay Culkin). They dig deep into Robert’s past and never sugar coat his life for easy consumption.

It was very interesting to see Robert as a kid when he was considered the pogo stick champion of his neighborhood and somewhat unsurprising to learn he never really fit into any of the social circles in high schools (the great artists never seem to). Throughout the documentary we get to hear his voice from old recordings, and he says that he grew up in suburban America which he described as a good place to come from because it is also a good place to leave. He also admits he never set out to be a photographer as he took a course on it and hated it. And yet during his college years he found a creative spark which never left him.

“Mapplethorpe: Look at the Pictures” also features interviews with various friends, family members and celebrities who all seem to agree Robert was a largely mysterious person who was always looking to get a rise out of people.  At the same time, his brother Edward said he could be quieter than anyone else in the room. Writer Fran Lebowitz even described him as looking like a “broken Cupid,” so it’s safe to say that many people viewed him differently. As the documentary continues on, it shows us a man struggling to express himself during a time where voices which differed from the norm were quickly chastised and silenced.

One of the documentary’s most fascinating segments comes when Robert meets up with singer Patti Smith and observes the time they spent together at the famous Chelsea Hotel in New York. This segment also takes us back to a time when the Big Apple was bankrupt, corrupt and looked nothing like the insanely expensive city it is today. The two of them fed off each other creatively and created art no one else ever could have, and Mapplethorpe even shot the photograph which became the cover for her first album, “Horses.” The fact that their relationship is cut a little short in the documentary is disappointing as it would have been great to see more of them here, and it could very well make for a great documentary of its own.

Both Bailey and Barbato also might have fared a little bit better had they given equal time to the methods Robert used to create his art instead of his personal life. Many of his photographs, including his famous “Man in the Polyester Suit,” are on display here, and while we get an idea of how he messed around with his Polaroid photos to create something startlingly unique, it would have been nice to see more of his technique in how he pulled certain photographs off.

Instead, “Mapplethorpe: Look at the Pictures” spends more time than it needs to on Robert’s love life and his various lovers. Granted, hearing them talk about Robert does give us deeper insight into his psychology and how selfish he became as he got older. We even here Robert say at one point, “Life is about using people and being used by people,” so his self-centeredness is very understandable. But to hear people talk about him in this manner makes the documentary at times feel like a broken record.

However, “Mapplethorpe: Look at the Pictures” finishes on a strong note as we watch Robert putting up his last solo show entitled “The Perfect Moment.” By this time, he had been diagnosed with AIDS which back then was a death sentence, and some described this show as being a “memorial with a living corpse.” Robert was only 42 years old when he died on March 9, 1989, but he looked more like he was in his late 60’s. In his later years he sought fame like crazy, and he soon became more famous in death than in life. The effect this final show had on the general public was profound, and it served to secure his legacy after he passed away.

Despite some minor flaws, “Mapplethorpe: Look at the Pictures” is a compelling documentary which serves to look at the famous artist as more than just a controversial figure. Robert was a human being with problems like anybody else’s, but he always photographed what he loved and the people he loved to be with. He pushed all sorts of boundaries as he described art as being about “opening something up.” He certainly opened the world up to looking at things differently than ever before, and he remains a potent force in the art world today. Looking at his photographs now, one cannot help but wonder why certain parts of the human body are still considered more dangerous than a loaded gun.