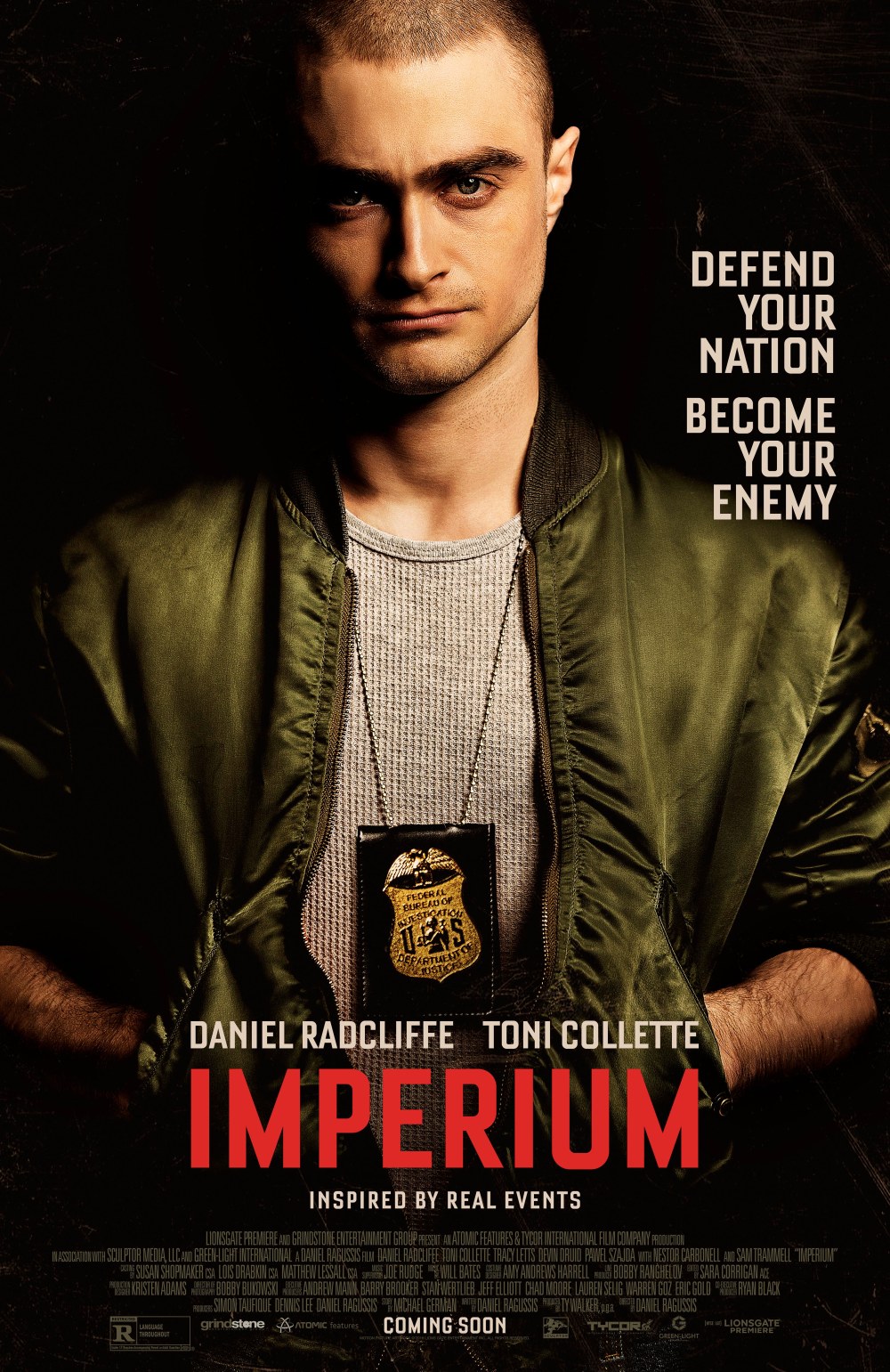 “Imperium” is being released not along after “The Infiltrator,” another movie dealing with an FBI agent going undercover and entering a vicious criminal organization in order to stop the bad guys in their tracks. Like “The Infiltrator,” “Imperium” doesn’t break any new ground in the realm of undercover cop movies, but it is a taut thriller which holds our attention as it throws a barely prepared protagonist into a den of snakes who are quicker to kill than trust.

Front and center in “Imperium” is Harry Potter himself, Daniel Radcliffe. Ever since playing the lightning-scarred wizard, the actor has taken on many challenges to prove to the world there is more to him than J.K. Rowling’s infinitely popular literary character. At first he seems out of place as FBI agent Nate Foster, but that’s kind of the point. Nate comes across as a bespectacled and bookish nerd who is more comfortable doing research than going outside of the office. It also doesn’t help he’s the butt of jokes by his fellow agents who have yet to take him the least bit seriously.

But then along comes agent Angela Zamparo (Toni Collette) who sees a strong potential in Nate for undercover work. She is also sick of her superiors devoting all their resources to foreign terrorism instead of putting just as much focus on domestic enemies. Angela brings Nate into her office, tells him what he needs to know and gives him a copy of “How to Win Friends and Influence People” by Dale Carnegie, the only book needed for undercover work. From there, Nate transforms himself into a war veteran turned skinhead and navigates his way into the dangerous underworld white supremacy.

I have to give writer and director Daniel Ragussis a lot of credit as he focuses on something I desperately want America’s politicians to focus on: domestic terrorism. When it comes to the “War on Terror,” much of the focus has been focused on international groups like ISIS or The Taliban, but the threat inside America has proven to be far greater these days. Ragussis makes this very clear as he features video footage and photos of Neo-Nazis at work, be it going on marches or committing heinous crimes against those people who are not white.

Radcliffe may still have the shadow of Harry Potter hanging over him, but this doesn’t affect his performance as Nate Parker in the slightest. He makes Nate’s transformation into an undercover agent not just believable, but at times frightening. Movies like these show their protagonists sinking so deep into their assignments to where they lose contact with who they are and develop strong friendships with criminals they are supposed to bring down. Radcliffe shows, a lot of times without words, just how desperate Nate is to get to the truth. We already know just how great an actor he is, and his performance in “Imperium” goes to show the kind of acting challenges he is willing to step up to the plate to take on.

But there’s also Toni Collette who proves to be every bit as good as Radcliffe in her portrayal of, Angela Zamparo. Collette makes Angela cool as they come, and it’s loads of fun watching her reduce her male colleagues to rubble as they can’t even begin to match her job efficiency. Collette made her big breakthrough back in 1994 with “Muriel’s Wedding,” and ever since then she has immersed herself so deeply into each role she plays to where you completely forget the ones she played previously. The scenes she shares with Radcliffe here are great as we watch a rookie and a veteran slowly start to figure one another out, and nothing is never as it seems.

“Imperium” has the requisite scenes where Nate has to think fast on his feet so his cover doesn’t get blown, and some resonate with intensity more than others. One of the best comes when Nate is going to a potential site for a party along with Andrew Blackwell who is played by “The Knick’s” Chris Sullivan. Blackwell brings his best poker face to this scene as we watch Radcliffe tremble in fear as he is made to feel death is just around the corner. Both actors succeed in creating an almost unbearably intense scene here as if they are about to make the most pivotal move in a chess game.

Now “Imperium” will not go down as one of the best undercover cop movies ever made, but it does get the job done. It also shows Radcliffe taking on a new challenge and growing even more as an actor. Both he and Collette are more than enough of a reason to check this movie out sooner than later. Writer and director Daniel Ragussis also deserves a lot of credit for focusing on domestic terrorism as it feels like a realm in today’s day and age which doesn’t get enough attention. Sometimes the greatest threat to a nation isn’t from outside of it, but from within. Seriously, look at what Donald Trump’s bizarre run for President has brought out into the open.