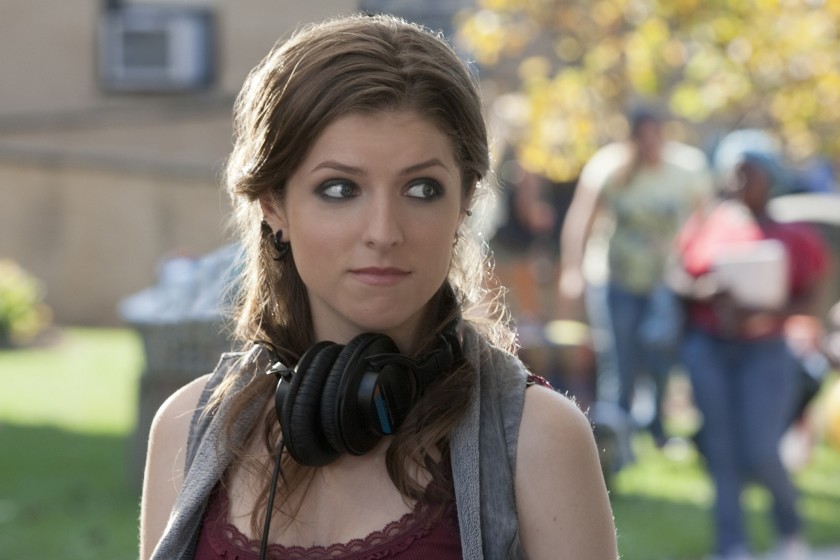 WRITER’S NOTE: This article was originally written back in 2012.

She has been a fixture of the “Twilight” movies and got an Oscar nomination for her role in “Up in the Air,” but now Anna Kendrick gets one of her biggest roles to date in the musical comedy film “Pitch Perfect.” In it she plays Beca who aspires to be a famous Los Angeles DJ but is instead made to attend the college her dad teaches at as he does not approve of her career choices. While there, she comes in contact with the school’s all-girl singing group known as The Bellas and in the process becomes its newest member. Kendrick talks about how she went about preparing to play Beca and of what the singing rehearsals were like.

The screenplay for “Pitch Perfect” was written by Kay Cannon, and Kendrick said she found it to be “so unbelievably surprising and subversive.” Just when Kendrick thought she knew where the script was going, Cannon ended up doing something which completely surprised her. When talking about Beca, Kendrick described her as a loner who is the audience surrogate for the craziness which ensues in this movie.

“You get to be kind of repulsed by this aggressively geeky world at the beginning of the movie and then fall in love with it while Beca does,” said Kendrick. “The interesting thing to me about the idea of a character that on paper is supposed to be what really ‘cool’ is, when you bring it to life, breaking her down and making her seem less cool, because that’s when I think the audience really connects with her. I don’t think you can just say, ‘Hey audience, this is a cool character so you’re supposed to like her.’ For me, I fall in love with characters when they’re out of their element or are uncomfortable and you really feel for them in a knee-jerk sympathetic way. So, I had a lot of fun trying to make Beca less cool. It’s fun to take a girl who fancies herself a little bad-ass and kind of embarrass her.”

For Kendrick, the role of Beca also allowed her to revisit her musical theatre days where she started out as an actress. She sang onscreen before in the movie “Camp,” but being the lead in “Pitch Perfect” made her understandably nervous as this was something new for her. Still, her love of singing and dancing made the experience of making this film all the more fun.

“One of the things I was really insistent on was that whenever I’m singing alone in the movie, I’m singing live on set,” Kendrick said. “Because I think something is a little bit lost in the recording studio, and frankly I’m just not good in the recording studio, like I don’t know how to do that. I think I’m just… I’m used to singing in front of people and singing in a recording booth was a little isolating and sterile. So, I was looking forward to the days when I got to sing live. Somebody would just blow a pitch pipe and then I would do the thing.”

Kendrick also confirmed she and the other actresses in “Pitch Perfect” did go through sort of an acapella boot camp, but it wasn’t as bad as it may sound. It consisted of singing rehearsals, and the only real problem after a while was the shoes everyone wears for the performances proved to be very uncomfortable. They were told by the production team how their shoes were “like sneakers,” but Kendrick made it clear “they’re like heels is what they’re like” and everyone ended up getting some serious blisters.

Of course, “Pitch Perfect” did have its drawbacks for Kendrick especially when it came to singing pop songs like “The Sign” by Ace of Base over and over again. After having sung this song so much, she hopes to never hear it again as it now haunts her dreams. She did, however, look at singing Miley Cyrus’ song “Party in the USA” as being important to Beca’s evolution in the film.

“I think that scene was brilliant because it’s such a painfully corny song that Beca should hate, but it’s a telling moment,” Kendrick said. “Is she going to pretend to be too cool for school, or is she going to go along with it and bond with these girls? I love that she’s willing to embarrass herself out of love for these new friends that she has.”

On the surface, “Pitch Perfect” looks to be a sort of “Glee” wannabe and cheesy beyond repair, but so far audiences have fully embraced it as a very entertaining movie. Kendrick has already left us with a number of terrific performances, and her role as Beca is yet another noteworthy addition to a resume which will continue to grow.