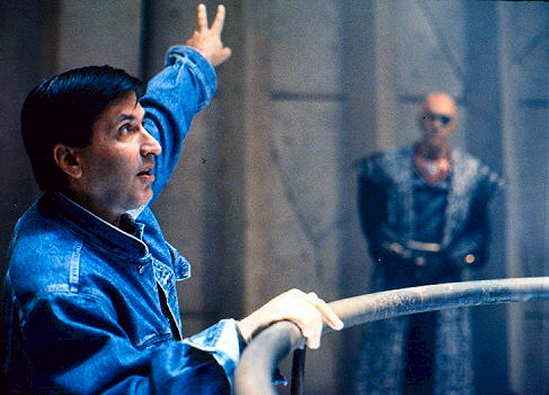 WRITER’S NOTE: This article was originally written back in 2011.

With “Star Trek VI: The Undiscovered Country,” co-writer and director Nicholas Meyer described it as being different from the previous films in the franchise due to it being “political in context.” At a Q&A which was held after a screening of it at the Egyptian Theatre, Nicholas said the story came about when he met with Leonard Nimoy. The story focuses on the Federation making an uneasy truce with their longtime enemies the Klingons, and it deliberately reflected the relations between the United States and Russia at the time the film was made.

Nimoy described the idea of having an “intergalactic Chernobyl” and of “the wall coming down in space” to Meyer, and the story came out from there. As it happens, the coup which took place in Russia happened around the time “Star Trek VI” was released, and Meyer said his dentist saw how the film predicted it would happen. His response was to see “The Undiscovered Country” again as he didn’t realize this was the case.

Watching it today made Meyer realize there was no way anyone could have anticipated the changes coming, be it the collapse of the Soviet Union or the current events in the Middle East. He said it all makes the Cold War seem good in retrospect. Indeed, with the wars being fought in Iraq and Afghanistan, the scene where Spock forces a mind meld on Lieutenant Valeris to get information now seems like torture. Although Meyer said Spock’s intention in the scene was to just get information, he winces at it now and says it’s hard to watch when Valeris moans in Vulcan agony.

For the character of Klingon General Chang, Meyer freely admitted he wrote the part with Christopher Plummer in mind. This was largely due to how he loved listening to Plummer’s recording of “Henry V,” and he made it clear to the film’s casting director, Mary Jo Slater, that she should not come back to Hollywood without him. Incidentally, Mary’s son, whom you just might recognize, makes a cameo in the film as an officer aboard the Starship Excelsior.

“Star Trek VI” was the last movie which featured the original crew of the starship Enterprise. Meyer described every day as being “normal” until the last one. At that point, the whole cast became very cranky, and they forgot lines of dialogue which some of them did not like in the first place. The whole cast had been together for 30 years, and since they go back a long way, they approached the end of it all in a very “bewildered” state. One thing’s for sure, the signatures from the cast at the movie’s end were not hokey in the slightest.

This also turned out to be the last “Star Trek” movie which series creator Gene Roddenberry got to see before he died. Meyer said his interactions with Roddenberry were “minimal” as Roddenberry was not officially involved with the movies after “Star Trek: The Motion Picture” and was relegated to being an “executive consultant.” Apparently, Roddenberry was incensed that the screenplay for “Star Trek VI” made the crew out to be racist, but it did give this movie its much needed dramatic conflict. He died three days after he viewing a rough cut of it, and the movie is dedicated to his memory just as it should have been.

Looking back, “Star Trek VI” questions whether we have reached the end of history, and it is clear we have certainly not. It served as a perfect swan song for the original cast and was a much better movie than its predecessor (“Star Trek V: The Final Frontier”) which almost destroyed the franchise. It also provided us with one of the greatest pieces of dialogue ever in a “Star Trek” movie:

“You’ve never experienced Shakespeare until you’ve read him in the original Klingon.”