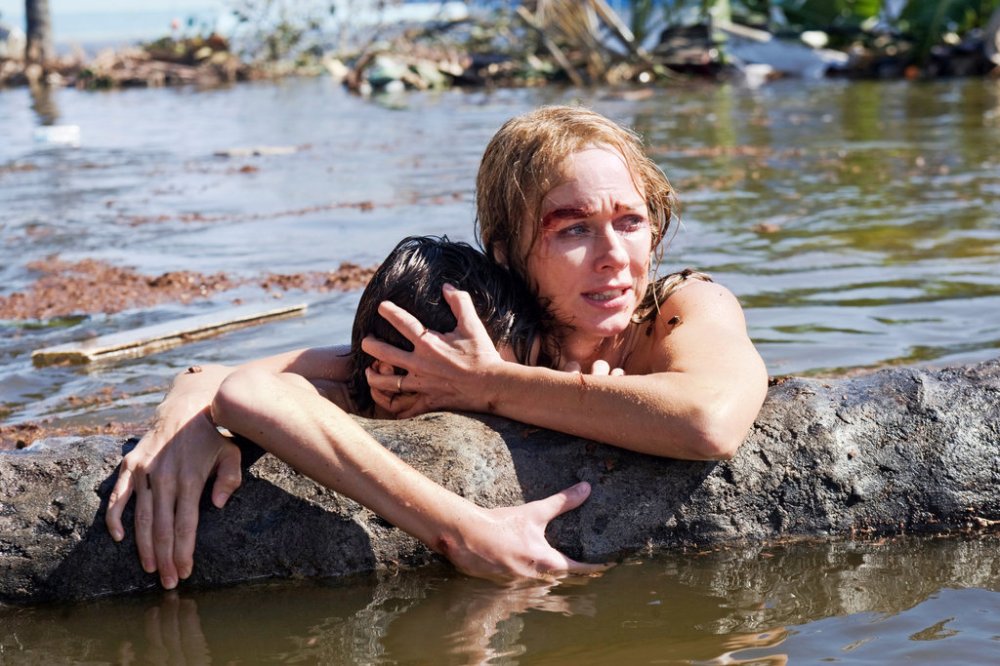 WRITER’S NOTE: This article was written back in 2012.

Australian actress Naomi Watts gives an emotionally pulverizing performance in J.A. Bayona’s “The Impossible,” a film which chronicles one family’s struggle for survival in the aftermath of the 2004 Indian Ocean tsunami. In it, Watts plays Maria, a doctor who is staying with her husband and children in a beautiful resort in Thailand for the Christmas holiday. This vacation comes to a horrific end when the tsunami decimates the country’s coastal zone and separates Maria and her son Lucas from the rest of her family. The role has Watts dealing with her fear of water, playing a character based on a real-life person, and the immense difficulty of shooting in not one, but two giant water tanks.

While at the movie’s press conference which was held at The Four Seasons Hotel in Beverly Hills, Watts described playing Maria as being “the most physically, emotionally draining role” she has ever taken on since “King Kong.” Considering she has played such equally draining roles in “21 Grams” and “Mulholland Drive,” that’s saying a lot. After doing “King Kong” she said she would never take on a role like that again, but even she couldn’t say no this script or working with Bayona who made the acclaimed horror movie “The Orphanage.”

Unlike the tsunami sequence in Clint Eastwood’s “Hereafter,” the one in “The Impossible” was done with real effects and no CGI. This makes the sequence all the more harrowing to watch, and seeing Watts hang onto a tree for dear life while water keeps rushing furiously by here makes for one of the most emotionally intense sequences in any 2012 movie. In an interview with Steven Rea which was featured on the Philly.com website, Watts talked about what it was like shooting the sequence which itself took four weeks to complete.

“I didn’t know it was going to be so difficult,” Watts told Rea. “They had it all very well prepared – we had allegedly the second largest water tank in the world, and they had these giant cups that we were anchored into . . . so you were just above water level, you could use your head, and you can use your arms so you looked like you were swimming. . . . And you’re on this track, and then a giant wave was coming towards you . . . and then side pumps were shooting more water, and all the garbage and debris. . ..”

“So, it got increasingly difficult, and then we noticed that we couldn’t actually act, or speak,” Watts continued. “We were lucky if we could get one word out, and that word would be ‘LU-CAS!’ It was tough, and then the underwater stuff was even more difficult. That was very scary.”

You have to give Watts a lot of credit not just for the brave performance she gives, but also for how making this movie made her deal with her fear of water. This was not the result of watching “Jaws” several dozen times, but of a near drowning accident she had when a teenager. She related this story to NPR’s Melissa Block.

“When I was about 14, my family emigrated from England to Australia, and we decided to stop in Bali on the way through. And having grown up in England, we were not great swimmers and knew nothing about riptides,” Watts told Block. “Anyway, we got caught in a riptide, and I didn’t know what to do other than swim against it, and got to the point of exhaustion, and then just about gave up. But then my mother, somehow, miraculously found sand beneath her feet and just managed to pull me in. And so, as a result of that experience, I’ve always been afraid of the waves and strong currents, so it’s quite interesting that I ended up doing this.”

It’s very interesting indeed, and it makes you admire Watts all the more for playing this character. After learning about her near-death experience, it becomes clear the fear which crosses the actress’ face onscreen was not at all faked.

Another big challenge for Watts in playing this role was it was based on a real-life person, Maria Belon, who, along with her family, amazingly survived the tsunami which claimed thousands of lives, and she herself suffered some serious injuries which had her at death’s door a few times. It’s always intimidating to portray a person from real life, especially one who’s still alive and has been through an experience we are grateful not to have gone through ourselves. While at “The Impossible” press conference, Watts talked about what it was like to meet Belon.

“Originally when I met Maria, I was incredibly nervous and I didn’t know where to begin. I felt like, I’m just an actor and you have lived through this extraordinary horrendous thing, and I just don’t know where to start,” Watts said of their first meeting. “But we sat there in front of each other for five minutes, she didn’t feel the need to speak and I couldn’t, and then she started just welling up and the story was told just through a look. I started welling up and then we just thought okay, let’s get on with this, and she continued to speak for three and a half hours and time just went by like that.”

“She stayed with me the whole time,” Watts continued. “I don’t just mean physically, but we were connected. We sent emails back and forth, and she would write endless letters about all the details that took place. The thing that she talked about was her instinct and her ability to trust herself which I think we lose so often. I feel like I am full of self-doubt and second guessing which is why this story becomes an interesting one because you wonder how you would deal with this.”

Naomi Watt’s performance in “The Impossible” deserves a Purple Heart as much as it does an Oscar. As an actress, she appears to be plumbing the depths of her soul to pull off roles like this one, and I think she’s one of the bravest actresses working today. While she may be yearning to stay away from roles like this in the future, it’s hard to think of many other actresses who can go to the places she goes to portray raw emotion so honestly.

Ben Kenber, “Interview with Naomi Watts On The Impossible,” We Got This Covered, December 19, 2012.