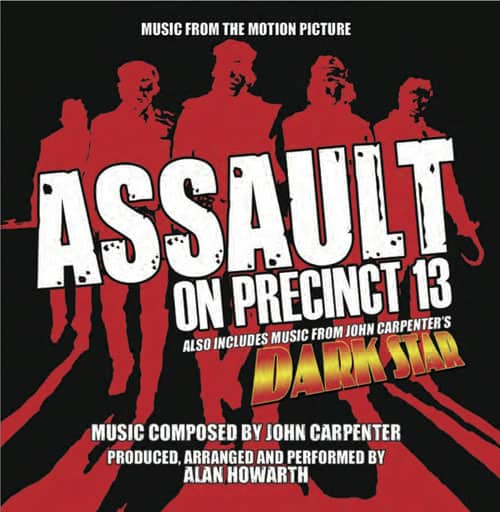 “Assault on Precinct 13” and “Dark Star” were Carpenter’s first movies which he directed and did film music for, and they were extremely low budget affairs which forced him to make the best use of whatever he had available. The soundtracks for each ended up inaugurating what is known as “the Carpenter sound” which was expanded on in later films such as “Halloween II” and “Prince of Darkness.” The theme to “Assault on Precinct 13” is one of Carpenter’s most memorable, and it was inspired in part by Led Zeppelin’s “Immigrant Song.” His music for “Dark Star” helped to illustrate the movie’s more thoughtful elements as well as its most comically absurd.

Other artists have re-recorded Carpenter’s music over the years with varying degrees of success, but BSX Records really lucked out here in getting Howarth to recreate these two soundtracks. A highly regarded sound designer and pioneering electronic musician, Howarth worked with Carpenter on the scores to many of his movies all the way up to 1988’s “They Live.” With “Assault on Precinct 13” and “Dark Star,” Howarth doesn’t try to update either soundtrack, but instead aims to remain faithful to Carpenter’s original versions and how they sounded back in the 1970’s. The only real difference is while both soundtracks were originally recorded in mono, Howarth gets the opportunity to record them in stereo which allows for a more powerful presentation.

“Assault on Precinct 13” ends up sounding better than ever here, and the main theme will give your stereo speakers a really strong workout. Track 16 is my favorite on the disc as Howarth takes the movie’s theme and adds orchestral elements on top of the electronic ones. It’s the closest he comes to updating any of Carpenter’s soundtracks, but the theme still stays very close to its original sound.

As for “Dark Star,” Howarth sounds like he’s having a blast recreating all those primitive computerized sounds which dominated the score for the 1974 movie. He even recreates “Doolittle’s Solo” which had the character of the same name performing on a makeshift instrument made up of bottles and tin cans, and he adds in those crazy sounds which emanate from that beach ball of an alien. In addition, composer Dominik Hauser arranges and performs a new version of the song “Benson, Arizona.”

This CD also comes with a highly informative booklet entitled “Assault on a Dark Star: The Musical Pulse of Early John Carpenter” written by Randall D. Larson, a film music columnist and author of the book “Musical Fantastique: 100 Years of Science Fiction, Fantasy, & Horror Film Music.” Larson goes into excellent detail over the challenges Carpenter faced in making both “Assault on Precinct 13” and “Dark Star,” and of how he went about created the music for each. Larson also talks in depth with Howarth on how he went about re-recording the scores for this release and the types of equipment he had to work with.

When it comes to re-creating a well-known soundtrack, composers and musicians usually find themselves at a loss. Whether they do a good job or not, they end up giving us something which makes us pine for the original version. The great thing about BSX Records’ “Assault on Precinct 13/Dark Star” release is how Alan Howarth makes both film scores sound as they were always meant to sound. Listening to them is like traveling back in time to the 1970’s when these two movies came out, and it makes for one of the best soundtrack re-recordings I have heard in a long time.

Click here to purchase a CD copy of the soundtracks.

Click here to purchase the digital copy of the soundtracks.