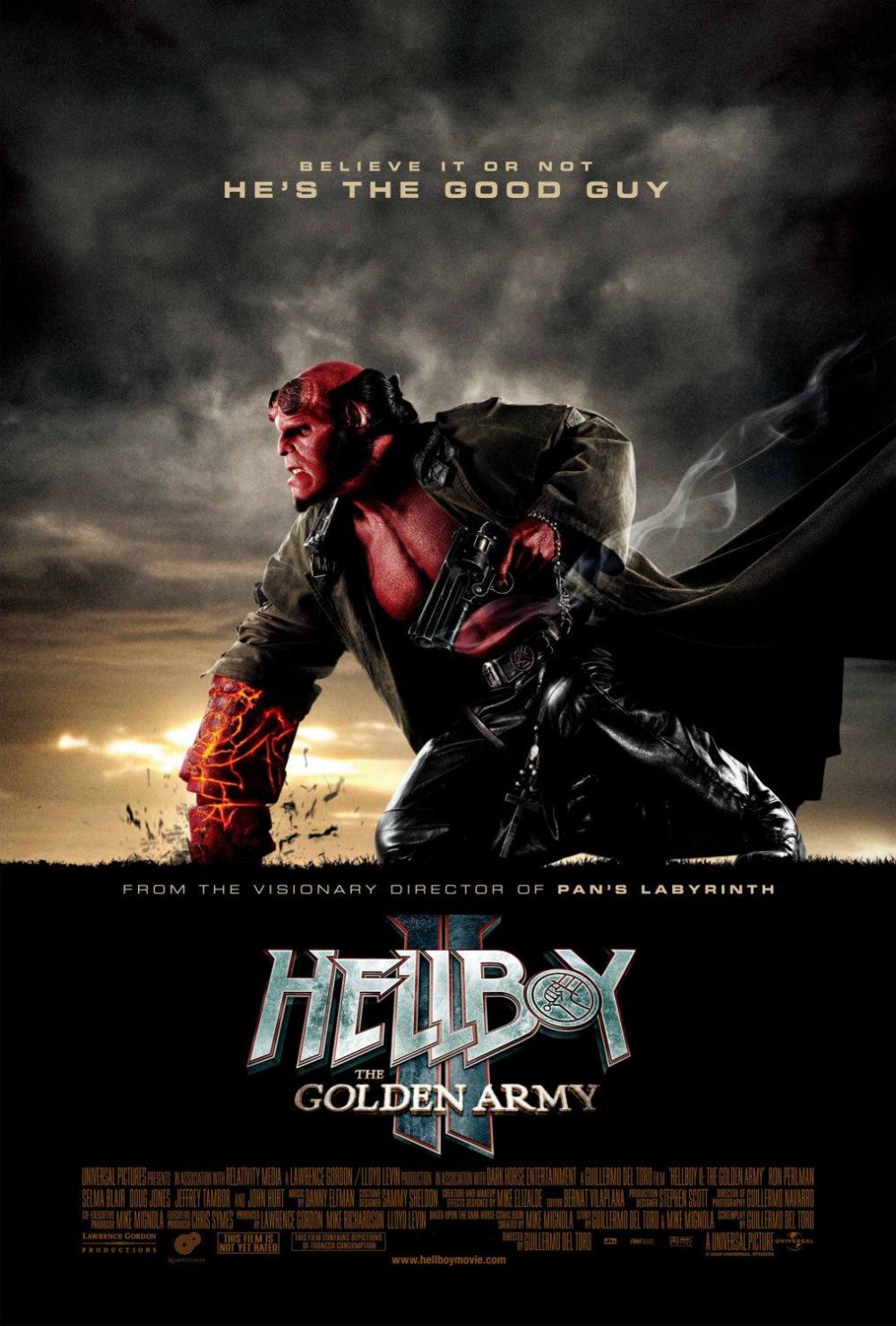 Darn it, I was not able to get around to seeing the original “Hellboy” before checking out its sequel, so I hope I am not missing much. When all is said and done, however, I was able to follow along with “Hellboy II: The Golden Army” and its characters with little, if any, confusion. I would like to know how the fish character, Abraham, breathes outside of the water, but I guess I’ll have to watch the original to find this out. With this sequel, we do get some back story of how the title character came to be, so the uninitiated shouldn’t feel too alienated from what is going on here.

“Hellboy II,” like its predecessor, comes to us from the infinitely inspired cinematic mind of Guillermo Del Toro whose work here proves to be endlessly imaginative on a visual level. In the last few years, he has proven to be one of the most original and creative directors working in movies, and his 2006 film “Pan’s Labyrinth” was one of the very best of that year. While this sequel doesn’t reach the creative brilliance of that movie, it doesn’t matter much because this time around Del Toro is just out to give us a fun time. “Hellboy II” is definitely a lot of fun, and there is plenty of creativity on display here which you don’t see from your average movie studio looking to cut down overall budgets wherever and whenever they can.

Hellboy himself is played by Ron Perlman, and there is no one else who could have inhabited this demonic superhero anywhere as effectively. Seriously, I can’t think of one. Perlman previously worked with Del Toro in “Blade II” which was another great sequel, and he is also best known for his roles in “The City of Lost Children” and the television series “Beauty and the Beast.” His imposing height and rough demeanor fit perfectly with this comic book character who has a lot of Casper the friendly ghost inside of him as he wants to get along with people instead of them fearing and hating him. Hellboy is kind of like Snake Plissken from “Escape From New York,” except he does care about more than himself than just staying alive.

The prologue lets those who haven’t seen the original know how Hellboy was actually created by the Nazis, but he was soon rescued by the Army and raised to be one of the good guys instead of becoming a villain. On Christmas Eve, he is told a bedtime story by his surrogate father, Professor Trevor ‘Broom’ Bruttenholm (John Hurt). This allows Del Toro to set up the story of the Golden Army and of how they waged a war against humanity to rule the earth. The truce between the mythical world and humanity, however, is about to be broken as Prince Nuada (Luke Goss) seeks to restore the rule back to the mythical world.

The world of “Hellboy” is much like the one we saw in the “X-Men” movies as it deals with characters rejected by society for being different. Hellboy, while being hurt by the rejection of the humans, seems to have a strong sense of humor about the whole situation. While doing his duty against his and the world’s enemies, he always finds the time to drink a couple 6-packs of imported beer and take care of an unusually high number of cats (how does he keep track of them all?). The other characters around him are just as alienated from humanity, and this is mainly because the majority of them look anything but human. One of the other main characters, Abe Sapien (played by Doug Jones), is a fishlike character who has to wear a special breathing apparatus filled with water wherever he goes. One of the other ingeniously created characters in this movie is Johann Krauss, an ectoplasmic being who lives in a containment suit. While the characters of the “X-Men” movies may stand a chance of having seemingly normal lives, the ones in the “Hellboy” franchise don’t look to be as lucky.

I enjoyed some of the music choices Del Toro made here, and I’m not just talking about Danny Elfman’s score which is the same kind of score he gives to Tim Burton movies. There is one point where the song “Beautiful Freak” by the Eels (one of my favorite alternative bands) is used to help illustrate the strong relationship Hellboy and his girlfriend Liz (Selma Blair) have. No one can love Hellboy the way Liz does, and it certainly not a perfect love to put it mildly. There is also a funny and strangely touching moment between Hellboy and Abe where they start singing to a Barry Manilow song as they seek to find the elusive magic of love.

Selma Blair proves to be terrific as Liz, and she gives her character a don’t mess with me attitude as well as a vulnerability which makes us care about her all the more. You never doubt that she is ready and willing to risk her life and even the fate of humanity to save Hellboy for reasons which are made abundantly clear at this sequel’s start.

I also really admired the character of the Johann Krauss and of how he was created. There is also a hilarious fight scene between him and Hellboy where he ends up fighting the hornless devil boy in the least expected way possible. That scene was one of my favorites, and it also helps that Johann is voiced by Seth MacFarlane, the creator of “Family Guy.”

There’s nothing truly original about the story of “Hellboy II: The Golden Army,” but Del Toro still manages to make it feel original in a way only he can pull off. Right now, he is one of the few directors I can think of who has a really unique filmmaking style. Even if this sequel doesn’t prove to be one of his best works, it still has a wonderful level of creativity missing from many mainstream films.

In the end, “Hellboy II” proves to be a fun ride, and it does make me want to catch the original at some point in my lifetime. Better yet, I should also check out “The Devil’s Backbone,” “Cronos” and “Mimic.” I have a lot of catching up to do.