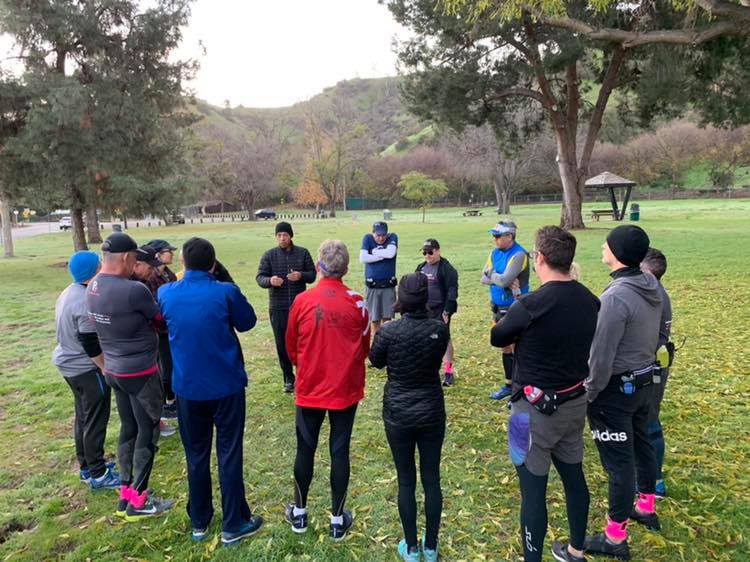 After a week where rainstorms pounded Los Angeles to where new potholes formed next to the ones which still need to be filled, the sun finally came out again to our collective delight. Yes, sunny weather is the usual norm in Southern California, but we have not seen the sun for the last few days, and a few days here can feel like a whole month. What a pleasure it was to play “Here Comes the Sun” by The Beatles when it thankfully broke through the clouds after a long hiatus.

Following last week’s 16-mile run, the Pablove group was set to do a recovery run of eight miles. I kept myself from doing any maintenance runs during the week as my right foot was still hurting a bit, and after finding myself limping into a nearby McDonald’s for that favorite breakfast of mine, I put ice on it at any given opportunity. Instead of running, I did a couple of rounds of boxing on Wii Sports. Laugh all you want, but I always get one hell of a cardio workout from it.

I arrived at Griffith Park ten minutes before 7:00 a.m., and I would like to add how I was the first Pablove runner to show up there. And yes, I was also the last Pablove runner to finish their run, something which I have no doubt comes as no surprise.

This eight-mile run took us outside of Griffith Park and into Burbank where we ran up and down the familiar streets which surround the local parks and Disney Studios. For once, I found myself really keeping up with my fellow runners to where I was convinced I would be finishing alongside them for a change. Woo-hoo! Well, that’s what I thought anyway.

For most of this training season, I have not bothered running at any specific pace. Everyone else seems determined to run for several minutes straight and walk for what I am guessing is thirty seconds. As a result, I felt obligated to keep up with them as best as I could. But as the run went on, the runners ahead of me became less and less visible, and I was once again all by myself. Glendale (the man, not the city), was behind me, but I believe he is doing the half-marathon this year as he typically cuts his runs short.

My right foot no longer hurts I am happy to report. As much as I would have liked to have done my maintenance runs, it was in my best interest to stay off my feet throughout the week. It was also in my best interest to be conscious of how I was standing throughout the day. This nasty habit of standing on the side of my right foot did me no favors, and this is a habit which needs to die hard.

When I reached the turn around point, Coach Joaquin told me to run the next block or two at 80%, and then to walk the block after that. With us getting closer and closer to the day of the LA Marathon, we needed to step up our game. It was nice to know I could still run very fast even after pounding the pavement or asphalt for four miles.

Still, I found myself taking more walk breaks than I thought I would. I got off to a really good start on this run, and I found myself getting a bit winded a mile five. It was worth walking to enjoy the beautiful and sunny morning as, again, we have seen one like this in the last few days. Eventually, I had to remind myself of how the finish line wasn’t as close as I thought it was.

When I crossed the finish line a number of minutes later, I was pleased to see some of my fellow runners such as Jasmine waiting for me. The coaches were also pleased to see me and applauded as I wrapped up my eight miles, and not just because it meant they could finally get in their cars and drive home.

I felt like I really earned the Sausage McMuffin with Egg meal I got at McDonald’s afterwards. On any other day, I would have gone to the nearest Denny’s to indulge in the forbidden meal which is the Moons Over My Hammy sandwich, but I didn’t feel like going to an establishment where I had to wait an extended period of time to eat.

Next week we run 18 miles, and I will be ready for it. Those maintenance runs will be taken care of, and cardio exercises will be made a priority. We’re moving on up to the west side, and it is not meant to be an easy conquest.

FUNDRAISING UPDATE; I have now raised $557 towards my fundraising goal of $1,500 for The Pablove Foundation, and I hope those of you reading this will consider contributing to the fight against pediatric cancer. Please click here to find out how you can help.