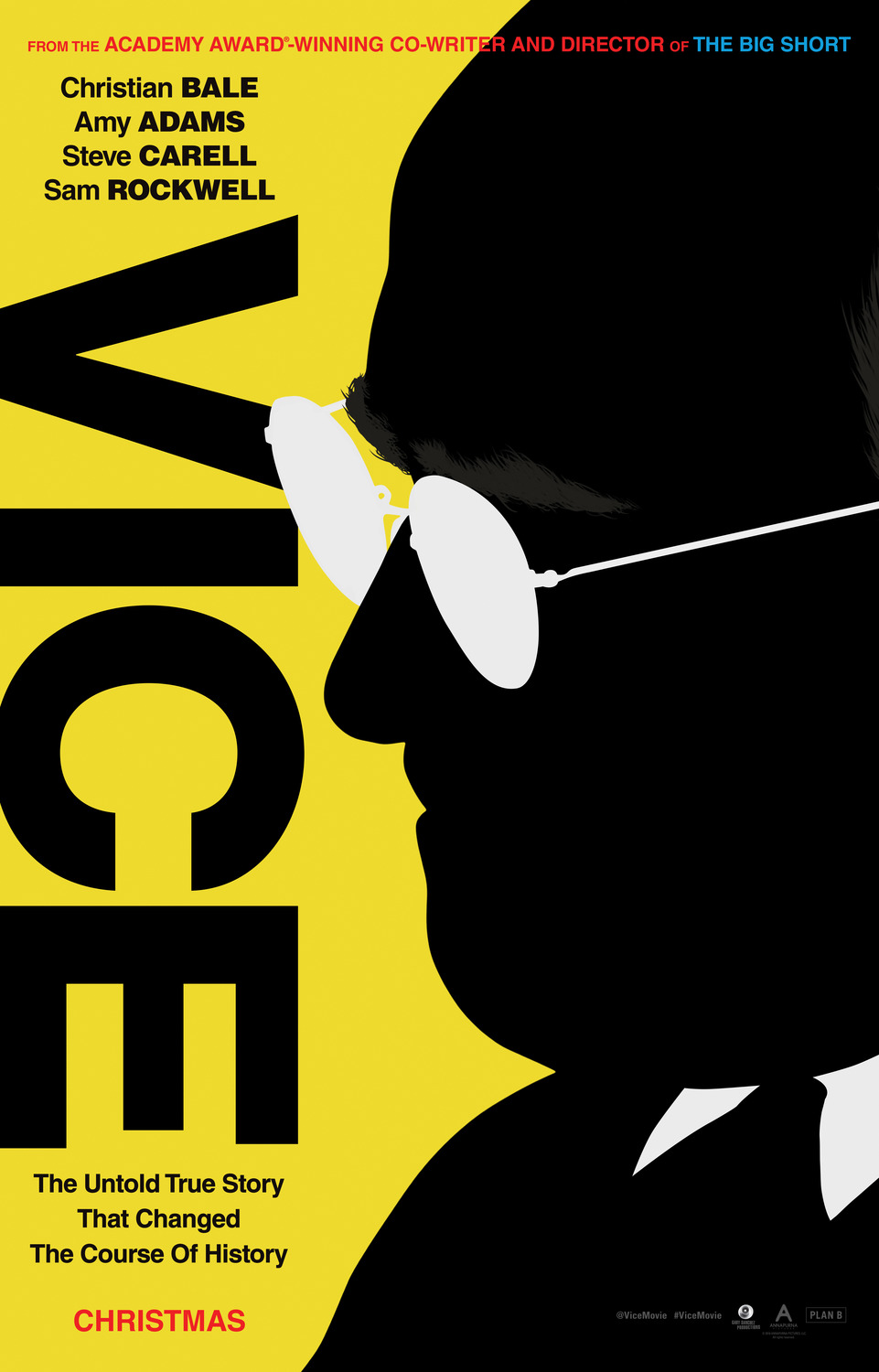 “Is it better to be loved or feared?”

“I would rather be feared because fear lasts longer than love.”

-from “A Bronx Tale”

There is a key scene in Adam McKay’s “Vice” which serves as a reminder of how Dick Cheney was the most powerful Vice-President who ever lived. It takes place on September 11, 2001, and Cheney and the key members of George W. Bush’s administration are gathered together in room, but Bush himself is away from the White House. During a conversation with a military general, Cheney orders any suspicious aircraft to be shot down. Another person quickly raises an objection, but Cheney simply raises his hand ever so slightly to silence her. He doesn’t have to yell at or ask her to be quiet; just a simple movement was all that was needed to remind everyone in the room who was the one with all the power. Cheney instilled fear in everyone, even George W.

Christian Bale goes to great lengths in transforming his body into the characters he portrays, and his performance as Cheney will definitely go down as one of his memorable to say the least. There were times where I kept waiting for Bale to raise his voice a little higher as the monotone he was speaking at threatened to be more grating than the voice he gave Batman. But again, Cheney never has to speak up to get his point across. It reminded me of what Henry Hill said about Paulie Cicero in “Goodfellas:”

“Paulie may have moved slow, but it was only because Paulie didn’t have to move for anybody.”

Bale put on 45 pounds for to play Cheney, and he gets the former Vice-President’s mannerisms down perfectly to where you completely forget it is an English actor playing this American politician and one-time CEO of Haliburton. It is such a mesmerizing portrait as he makes us see how slowly but surely Cheney got seduced into the realm of power hungry politicians whether it was serving under his mentor Donald Rumsfeld (Steve Carell) or being manipulated by his wife Lynne (Amy Adams). But even better is the way Bale, as Cheney, subtly worms his way into becoming George W. Bush’s (Sam Rockwell) VP to where he has more control over certain areas of government than Bush, as he is portrayed here, would care to have.

The fact we have any kind of biopic on Dick Cheney is astonishing as he and Lynne remain very secretive about their lives to where McKay employs a disclaimer at the film’s beginning which is as wickedly clever as the one Steven Soderbergh gave “The Informant.” This disclaimer ends with McKay saying he and his fellow collaborators “did our fucking best,” and I guess that’s all we can ask for.

It’s no surprise the director and co-writer of “The Big Short” has chosen an unorthodox approach to making this biopic as it shifts back and forth in time to Cheney’s college days where he spent more time getting drunk than studying or playing football. McKay also has Jesse Plemons playing Kurt, an everyman narrator who says he has a close connection to Cheney, a connection which will eventually be made clear. Throughout, we are shown images from real life which, if they haven’t already, should forever be burned into your conscious memory. Among them is former President Ronald Reagan at the Republican National Convention where he vows to “make America great again.” From here on out, this is a phrase which should forever live in infamy.

One of “Vice’s” most inspired moments comes when McKay begins the end credits midway through the film. What’s especially hilarious about this is how it reflects the conclusion many of us would have preferred Cheney’s to have had in American politics; the kind where he never would have become Vice President. But those familiar with American politics and the Bush Administration cannot and should not expect a happy ending here. Cheney left a lot of damage in his wake, and his political power still remains constant even though he no longer holds public office.

Indeed, Dick Cheney is a tough nut to crack as “Vice” can only get so far under his skin to where you wonder if this man has anything resembling a soul to explore. As the film goes on, he is shown increasingly to be a heartless individual, both figuratively and literally speaking (he did have a heart transplant), and he comes across as such a cold human being to where his muted reactions to the multiple heart attacks shouldn’t be seen as much of a surprise. The fact he even noticed he was having them is more surprising.

Where McKay really succeeds is in showing those closest in Cheney’s inner circle, among which is his wife Lynne. Amy Adams gets the opportunity to play a Lady Macbeth-like character much like the one she played in Paul Thomas Anderson’s “The Master,” and she is fantastic from start to finish. Adams makes Lynne into the key motivator for Dick’s ascent into American politics to where she fearlessly campaigns for her husband while he is laid up in the hospital. Lynne recognized she lived in a time where she could not do all the things she wanted because of her gender, and she finds immense satisfaction through her husband’s rise to power. Adams is brilliant in portraying Lynne’s fascination with the political world and in showing her quick concerns when anything threatens Dick’s standing in Washington D.C.

Another great performance comes from Steve Carell as former Secretary of Defense Donald Rumsfeld. Carell makes Rumsfeld into a gleefully cynical politician whose values have long since been corrupted by the quest for power. Just watch when Cheney asks him what they are supposed to be believe in. The gut-busting laugh Rumsfeld gives off speaks volumes as it illustrates exactly where his interests lie, and it is not with working class Americans.

As for Sam Rockwell, his portrayal of George W. Bush feels pitch perfect as he portrays a man whom even Cheney can see is more interested in pleasing his father when it comes to running for President. After watching Will Ferrell’s classic impersonation on “Saturday Night Live” and Josh Brolin’s portrayal of him in Oliver Stone’s “W,” it seemed all too difficult for any other actor to offer a unique interpretation of this unfortunate White House resident. Then again, Rockwell proves once again what a brilliant actor he is as he captures George W.’s mannerisms while humanizing this man in a way I did not expect or was ever in a hurry to see.

I was very much entertained by “Vice,” but I did come out of it feeling like it could have dug deeper into Dick Cheney’s life. Also, the nonlinear storytelling format is at times jarring as we are thrust from one moment in history to another with little warning. Then again, in retrospect, I wonder what more could have been said about Cheney as he seems to be this malignant vessel of a human being who is never has the look of someone who could ever be fully satisfied by anything. The only positive thing I saw of him was his acceptance of his daughter Mary’s (played by Alison Pill) sexuality when she comes out as a lesbian. If only Cheney had treated all Americans like they were Mary, things would have been much different than they ended up being. Of course, when his other daughter Liz runs for public office…

One of the last moments of “Vice” has Bale breaking the fourth wall as Cheney where he looks directly into the camera and tells all those listening he is apologizing for who he is or anything he has done. I’m fairly certain Cheney has not made any statement like this on camera in real life, but the speech Bale gives as him rings frighteningly true. Considering how complicit the former Vice-President was in war crimes which included torture and sending American troops into a war based on false evidence, he has a lot to apologize for, let alone answer to. But let’s face it, he’s never going to apologize. Ever. “Vice” has as many funny moments as it does haunting ones, and this speech is especially haunting because, let’s face it, he will die before he ever considers apologizing. Heck, he almost did.