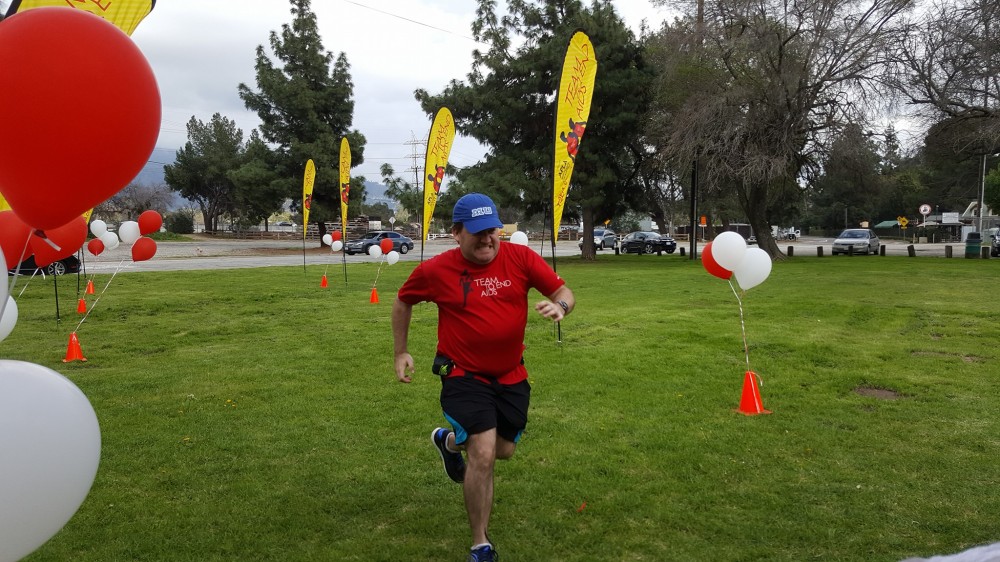 It’s been an interesting time for us Pablove Foundation runners. Having conquered 23 miles throughout the treacherous streets of Burbank, Glendale and parts of North Hollywood we haven’t gone through previously, we now had to ease up on our weekly mileage as recovery runs became a much-needed necessity. As the Los Angeles Marathon is now only a few days away, the last thing we needed, or wanted, to do was overdo anything. But with this run being our last for the training season, the coaches still had us running up the dreaded hill in the back of Griffith Park.

We were supposed to run 10 miles last week, but the threat of a major rainstorm forced the coaches to cancel it as they didn’t want to risk us getting sick before the big day. As a result, we had to run those 10 miles on our own. But when it came to this week’s run of eight miles, the threat of a major rainstorm in California was still in the air to where it was reported that it was actually snowing in Sacramento, something which rarely, if ever, happens Still, we needed to get one last run in before traveling 26.2 miles from Dodger Stadium to Santa Monica, and had to be both easy and challenging.

The coaches begged us to wear clothing which would keep us dry as heaven forbid we would develop pneumonia or some sinus infection which would make breathing more of chore than it should ever be. So instead of wearing my black Nike jacket like I always do, I wore this red poncho I still possess which in addition to keeping me dry also keeps me feeling very warm to where I become a beacon for humidity. I left my cell phone and iPod in my car as getting either of them wet was out of the question. Plus, we were running only eight miles, and that distance is a walk in the park for us marathon veterans.

Coach James was suffering from a nasty chest cold which he said had him coughing non-stop the night before. Still, he was usual enthusiastic and smiling self as he congratulated us for completing another marathon training season. The course he had in store for us kept us inside Griffith Park as we would be doing a loop around the park and up the dreaded hill one last time. Of course, my interpretation of these directions got a little confused, but more on that later.

We all went to the starting line and Coach James said, “Okay I want all my 14 and 15-minute runners to start first.” I repeated these instructions to everyone to make sure they heard him and, yes, it was my way of briefly deflecting the fact of me being the runner he was talking about. Coach James instructed us to run at a conversational pace and at the same pace we should be expecting to run on race day. I got off to an easy start and kept it up throughout. I was especially surprised at how well I was doing as fitting maintenance runs into my busy work schedule this past week proved to be more challenging than usual. Hey, I got bills to pay!

I kept waiting for the rain to come hammering down on me, and it was already pretty misty. While those clouds didn’t look like they were impatiently waiting to burst all over Los Angeles, the weather in Southern California has been especially bi-polar this past month. More often than not, the days are unseasonably warm, but recently the temperature has been surprisingly frigid, and these cold temperatures are coming to us just as we are about to see the beginning of spring. The weather gods must be having a great time messing with our heads as we are not sure what to expect from one day to the next. Here’s hoping this means the day of the marathon is cooler than it has been in the past few years. Running in the heat is overrated among other things.

I reached the turnaround point which was just pass the pony rides and made my way back. While running through Griffith Park, I came across dozens upon dozens of other runners whom I could only assume were training for the LA Marathon as well. Why did I assume so? Well, a number of them were wearing LA Marathon t-shirts from previous years, and why else would they be running on a rainy Saturday morning, let alone at such an ungodly hour? Many smiled as I passed by them, and some even said “great job” to which I returned the compliment. This proved to be a nice preview of what you can expect on marathon day as the city of Los Angeles comes together in a way it usually doesn’t as complete strangers cheer you on to the finish line.

You can rest assured I was equipped with all the energy gels and electrolyte tablets I could ever need for this run. I also have to acknowledge just how much Pedialyte has been for me this past training season, let alone after a night of heavy drinking. If you are ever lacking for electrolytes, be sure to have a bottle of it handy. It comes in different flavors, and it is a lifesaver if you are dealing with dehydration and diarrhea at the same time. It also has far less sugar than your average bottle of Gatorade.

As I approached the finish line at Griffith Park, I felt the same level of confidence I experienced a few weeks ago when I arrived where we started at what felt like lightning speed. When I am only a few minutes behind the runner who finishes before me, it always feels like an enormous accomplishment. I’m always the last Pablove runner to finish, and it’s always nice to know I haven’t finished an hour and a half later than everyone else.

Coach James did not see me making it to the end, but this is because he expected me to arrive on the other side of Zoo Drive. This is when I realized why I finished with such an astonishing level of confidence: I forgot to run up the hill. How did this happen? Didn’t I hear him say we were going up that hill like he told everyone else? How could I have forgotten about this? Perhaps I was expecting a sign which said “turn left here.” Or maybe I thought he didn’t mean… Upon realizing I forgot to run up the back of Griffith Park, I really started to beat myself up. What a stupid mistake I made! Coach James, however, was still all smiles and told me not to worry about it. Besides, he said, he had tortured us more than enough this past season, and me being a hardened marathon veteran more than spelled out for him how ready I was for the big day. I got in my car and drove off, feeling someone reassured.

But as I filled up my gas tank for $3.19 a gallon at Costco (the fact this is the best bargain for gas right now is depressing), I found myself lost in thought as the demons in my head would not stop beating me up over forgetting the hill. These demons also started taking the form of people from my past who left my ego in tatters during my time at high school, college, jobs, etc. This made my shame at not running up that hill all the more distressing, and I started to believe I would be reminded of this on many, many, many occasions. It was at that point I got back in my car and made the decision to go back to Griffith Park and run up that hill. It may have started to rain a little harder, but I had to do this for me and to shut up those voices in my head.

This time I brought my soundtrack iPod with me as some tunes were required this time out. Keeping in mind how we needed to run at conversation pace, I started off with a few tracks from the soundtrack to “The Color of Money,” a Martin Scorsese film. Don Henley’s “Who Owns This Place” had a nice rhythm to it, and Eric Clapton’s “It’s in The Way That You Use It” kept me from going too fast. And then came the hill, and I suddenly realized why I finished today’s run with such confidence: I didn’t run up the hill.

If there was one thing I wanted to improve this time out it was to go up the hill without running out of breath too soon. Once I begin my ascent, I am immediately ready to give up and walk. I relied on Peter Gabriel’s “The Heat,” the instrumental version of his song “The Rhythm of the Heat,” to get me up there faster than usual. But as soon as the song was finished, I had to admit to myself I was running way too fast. As a result, I took a longer than usual walk break in order to catch my breath. Ultimately, I feel like I have come a long way from when I started this season as I got up to the top a lot quicker than I usually do. And knowing there will be a few hills to conquer during the LA Marathon, it’s good to know I am improving.

I made it back to Griffith Park in one piece and reveled in my success to where. I even found myself smiling. Looking back, running up the hill felt a lot longer than the run itself. You can sure bet my legs were achy breaky (thank goodness my heart wasn’t), and while I wanted to celebrate with a big breakfast burrito, I instead drove back to my apartment and crashed in bed.

It’s hard to believe we have come to the end of another marathon training season. I always expect the last run to come with a strong feeling of finality, but it never feels like an ending. Even though I know we won’t be meeting up at Griffith Park next Saturday, it still seems I am going to be there. This training has been a significant part of my life these past few months and being without it always feels strange. Or maybe this is just a subtle way of someone telling me, “What makes you think you are going to stop training after the marathon?”

So here we go. Onward to another Los Angeles Marathon. Best of luck to us all, and here’s hoping and praying the weather will be much, much kinder to us than it has been in the last few years. As much as I may need a suntan, I don’t want the sun to shine too brightly on us.

FUNDRAISING UPDATE: With the funds raised on my personal page and various Facebook fundraisers, I raised a total of $1,011 this season for The Pablove Foundation. As a group, we Pablove runners raised over $48,000. There is still time to make a tax-deductible donation if you would like. Doing this marathon for Pablove has been an honor, and I am proud to continue the fight against pediatric cancer.

CLICK HERE TO LEARN MORE AND MAKE A DONATION.