WRITER’S NOTE: This article was originally written in 2014.

It’s back in the saddle again! Four times wasn’t enough for me, so now I’m back training for the Los Angeles Marathon for the fifth year in a row. Training with Team to End AIDS began again on October 18, 2014, and I actually found myself eager to get up early in the morning for a change. All my running clothes still seem to fit and haven’t developed any holes, so I don’t need to get new threads just yet. However, I think I should consider getting some new running socks.

For once I got to the running site with plenty of time to spare. I was eager to catch up with a lot of friends I haven’t seen in a while and to greet the coaches who always approach the start of a training season with a wealth of enthusiasm. It was great to see Coach JC Fernandez, Kerry Quakenbush and Dene Preston back in action as they welcomed us with the usual speeches about fundraising goals and what to expect this time around when it comes to training. We were also reminded again of how territorial the bike riders are when they’re out on the road, and this was before we began running.

One of the best sights to take in when I arrived at the park was the tree planted in the memory of Scott Boliver, our former marathon coach who left this world far too soon. It was planted on the grounds a few months ago, and it continues to grow tall. It’s a wonderful tribute to a man who inspired us all.

When it came to reuniting with friends I have trained with in the past, I got to meet up with Chris who I ran the 2012 Los Angeles Marathon with, and this is the first marathon he has trained for in a couple of years. I also got to catch up with Kerry who, along with me, survived the vicious monsoon which was the 2011 Los Angeles Marathon. A lot of our run together had us reminiscing about the memories of that exceedingly wet day, the kind which, ironically, we could use a lot of right now in California so we can get over this drought. Yes, leaping over the puddles back then was impossible as they quickly became rivers we could only hope to levitate over (if only such a thing were possible).

It also proved to be a throwback to that training season which had us running through a snowy Burbank when frost began forming on our clothes to where steam was coming off of them on our last few miles. It says a lot about us 2011 Los Angeles Marathon veterans that we came back for another marathon after it because it proved to be a clusterfuck of epic proportions (or a “shittacular” as others described it). For me, it was my first full marathon and a time to realize how wearing cotton sweats was completely counterproductive.

Today’s run was a simple one to determine which pace group we would be running in for the next few months. We ran two miles through the streets of Griffith Park, and we were encouraged to run at a comfortable pace to where we didn’t fund ourselves huffing and puffing. I did well for a guy who has kind of let myself go since the last marathon I ran, and I never ran faster than I needed to. After the last marathon, my hope was to run in other events around Los Angeles or in other parts of California, but this didn’t happen for a variety of reasons. Now certain parts of my body are much bigger than they should be, and they are not the parts I am eager to see increase in size. Hopefully I can trim a few pounds off my aging body before marathon day in 2015.

When I got to the finish line, I asked Coach JC how badly I did (jokingly of course). He said I did fine and that I would be back in the 13-mile pace group. This sounds perfectly fine to me, and it means I will be again running at a pace of 3:1; running for three minutes and then walking for one. It soon turned out to be the most popular pace group as those who were in the 14 or 15 groups found themselves merging their way into ours. I guess we 13-minute runners are still the hip crowd to hang out with!

So, the easy work is done. Next week we will be running three miles and then increasing our mileage from there. I’m looking forward to another great marathon training season. 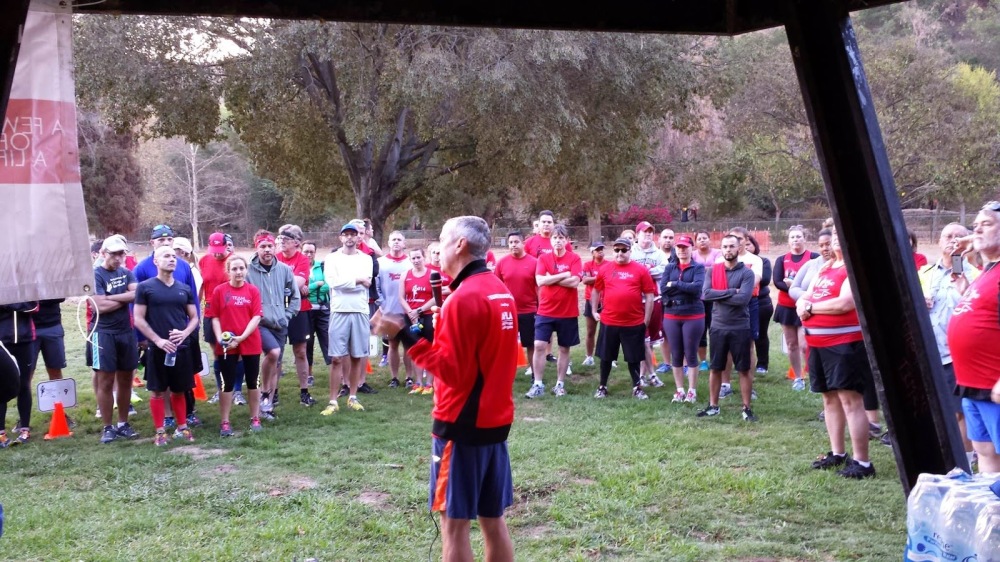 YOUR ATTENTION PLEASE: This marked the fifth time I trained for the Los Angeles Marathon. I am now training for it again, and this time marks the eighth year in a row I have taken on this admittedly insane challenge. This year, I am running it in support of The Pablove Foundation, an organization formed with the determination to find a cure for pediatric cancer. My fundraising goal is $1,500, and to date I have raised $306. I could really use your help, and invite you to make a tax-deductible donation to this wonderful organization. I thank you for your support.

CLICK HERE TO LEARN MORE AND TO MAKE A DONATION.