The last few weeks of marathon training have been frustrating as I have struggled to keep up with my fellow Pablove Foundation runners and with my fundraising efforts. With the end of the year approaching, I feel like yelling in peoples’ faces or using blackmail are the only ways to convince them it is best to make a tax-deductible donation on or before December 31, 2017. Sure, you can donate in 2018, but why wait? Blackmail can be a wonderful thing, but it’s not really an option right now… or is it?

I got back from Northern California the day before this run, a recovery run which would have us running a distance of 10.5 miles. I did my best to keep up with my maintenance runs while I was away, and you can think what you want about what I just said. This time, I was determined to run at a 2:1 pace instead of trying to keep up with everybody else. I also had a number of things to run off my belly from the past week, and they include the small popcorn and small Cherry Coke I had while watching Guillermo Del Toro’s “The Shape of Water,” the roast beef my dad cooked which was to die for, the endless plates of sushi and rolls I consumed at the Taru Restaurant in Danville, and the Santa Barbara Char I had at The Habit Burger Grill. Oh yeah, I also had a side of onion rings with ranch dressing. These calories had to be burned off. All of them.

Summer overstayed its welcome into the fall months, but winter has made its presence known as the mornings are incredibly frigid even for those who have been spoiled by the weather in Southern California. Those Pablove runners who showed at Griffith Park were eager to get started as shivering in the cold is nowhere as appealing as it is for Polar Bear Club members to jump into the nearest subzero pond, and even those people are being encouraged not to do so as this is one of the coldest winters on record. Yes people, climate change is real.

I enjoy talking with my Pablove runners before our runs because lord knows if I will see them at the finish line (odds are I will not). As they left me in their vapor trails, I was determined to stay at my pace of 2:1 regardless of how far they got ahead of me. As I headed out of Griffith Park and into Burbank, I constantly wondered if my running form was correct. Was I leaning forward too much? Was I crossing my arms in front of my chest like I shouldn’t? A runner’s work is never done. 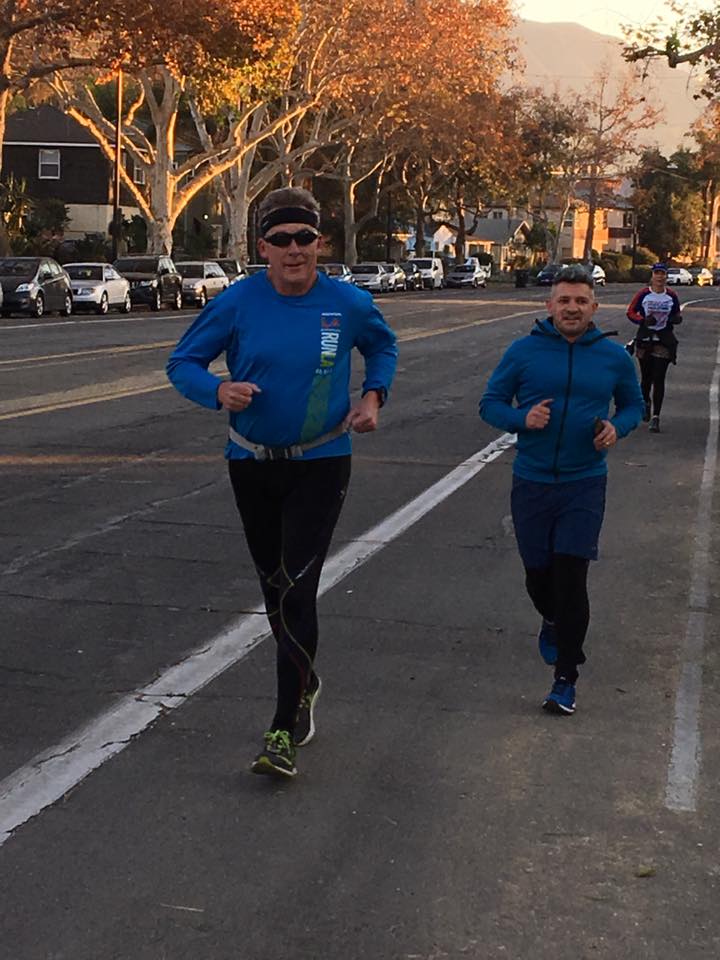 I kept up with the 2:1 pace throughout, but I did have to take an emergency bathroom break as the ghosts of meals past threatened to explode in a most disgusting way. As I limped my way to the nearest bathroom, the following dialogue Daisy Ridley uttered in “Star Wars: The Last Jedi” kept playing in my head:

“Something inside me has always been there, but now it’s awake and I need help.”

Bless the kind employees at the local CVS Pharmacy who allowed me to use their bathroom. The door to it had a keypad as many stores employ one now to keep the riff raff out. Still, these keypads can be frustrating as you have to seek out an employee to give you the code, and a lot of times you have to go to the front of the store while the bathroom is in the back of it. When you return to the bathroom with the code, there’s usually some dude who is convinced they were waiting there before you. Can you convince them this was never the case? Either way, the terror continues until you explode in one way or another. Thankfully, I did not dirty myself, and this is all the description you need.

Once I got back on the road, I ran into Coaches James and Kerry who were on hand to provide us with water, energy gels and whatever else we needed to complete these 10.5 miles in one piece. Coach James saw one of my water bottles still had a lot of water left in it, and he strongly encouraged me to consume more water on future runs as it will become increasingly important as our runs get even longer. For some reason, I pride myself on not drinking too much water on these runs, but perhaps I should reconsider this.

The coaches usually have papers of our runs to hand out to us, and I depend on them as my sense of direction has improved all too slowly throughout my lifetime. As Coach James gave us instructions and things to keep in mind, Coach Kerry texted us the directions of our latest run which would take us out to Burbank and then eventually back to Griffith Park where we would, yes, run up a hill. Coach James encouraged us to run up said hill without taking a walk break. Did I succeed in doing this? I’ll plead the fifth on that.

I tried to track my run with Runkeeper for a change, but despite my phone having at least 90% of power, the damn thing kept shutting down on me. This was crazy, I thought. I have all this power on my phone, so why does it defy me so coldly? I guess there are certain apps which suck too much power out of the battery to where Siri, or the Android’s equivalent, is saying to me, “What?! Oh no! That is too much! I need a rest. Just leave me alone. It’s bad enough you play Yahtzee all day long!” So, naturally, I turn my phone on again to, at the very least, get a look at the directions Coach Kerry texted to me. But Siri’s evil stepsister once again got on my case as if to tell me, “Oh shit! Don’t you get it? Stop touching me! I’m taking a nap. Plug me into a power source and we’ll talk.”

Fortunately, Coaches James and Kerry were on hand to make sure we all ran in the correct direction and didn’t end up heading towards Alhambra. Moreover, I got enough of a look at the directions to feel surprisingly confident about the path I was taking. Of course, it did help when Coach Kerry told me which street to turn on to start up that torturous hill.

The last few training runs I had left me feeling rather cruddy to where I felt like I was letting myself down. But upon finishing this 10.5-mile run, I found myself feeling really good for a change. I wasn’t struggling nor was I dragging my ass across the finish line, and I actually found myself smiling. Sure, everybody else had already gone home, but the coaches assured me the last runner finished 15 minutes before I arrived. Hearing of this made me feel like I am making good progress, so now I have to keep up with the maintenance runs and fit in cardio exercises whenever the opportunity presents itself.

With 2017 coming to an end, I look to 2018 for something with hope because I will go nuts if I do not. Here’s to finding a cure for pediatric cancer as well as finding some sanity in the White House as its current occupants don’t have nearly enough of it.

FUNDRAISING UPDATE: So far, I have raised $280 towards my goal of $1,500 for The Pablove Foundation. There are only a few hours left in the year 2017, so be sure to make a tax-deductible donation before the clock hits midnight. With the god awful Republican tax bill having been signed by the host of “The Apprentice,” the time to get much needed deductions are running out. Click here to make a donation.