I did manage to do two maintenance runs, 30 to 45 minutes each, before this Saturday’s run of seven miles. I was hoping to get a third run in, but the need to pay bills with unforgiving deadlines just had to take precedence as they always do. Still, I want you all to believe I am taking my training for the 2018 Los Angeles Marathon very seriously, and I plan to outdo my performance from las year and hopefully lose a lot of pounds in the process.

Coach Kerry referred to this run as the “7 of 7” in that we were running 7 miles starting at 7 o’clock in the morning. This made me a bit thirsty for a certain alcoholic drink, but getting dehydrated this early in the morning was completely out of the question. I managed to arrive at Griffith Park right at 7 a.m., and it was a peaceful drive to our training site and also a somber one as I listened to 100.3 The Sound, my favorite Los Angeles radio station which is about to go off the air permanently next week. Such a loss. 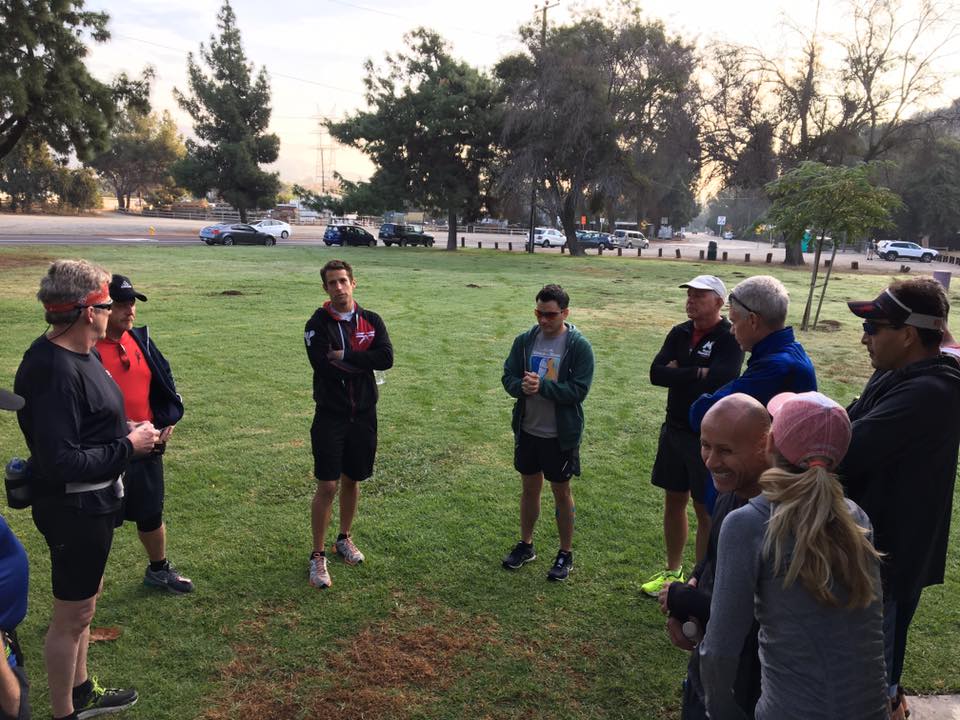 After running at a 3:1 pace last week, I decided to run a 2:2 pace. At the same time, I think everyone else was determined to run the whole seven miles because, once again, I was left in the dust with only my water bottles and energy blocks to keep me company. At least this week I have a fresh pack of energy blocks as the one I had last week was left over from the 2017 LA Marathon. Biting into one of those blocks was trying to bite into a slab of concrete. I’m still stunned none of my teeth fell out.

Actually, seeing every other Pablove runner shoot off into the distance quickly reminded me of my favorite Missing Persons song, “Walking in LA.” The key lyric from that song is “only a nobody walks in LA,” so this week I was a nobody. I did keep up with the running and didn’t fall behind everyone too much, but it would be nice to keep up with the rest of the team for a change.

By the way, I just want to say that I always wanted “Walking in LA” played at the starting line as it seems very appropriate. With all due respect to Randy Newman, “I Love LA” has kind of overstayed its welcome, and a change in things would be beneficial. Of course, this request will most likely fall on deaf ears. Then again, everybody does love LA on marathon day as total strangers who would ignore you under any other circumstance cheer you on to the finish line.

This run took us outside of Griffith Park and into the streets of Burbank. It was nice running by familiar spots in this city as it was slowly waking up from its Friday night slumber. I was especially grateful to run by the bread factory as the smell of yeast was truly intoxicating and brought a smile to my face. After all these years, I still get a rise out of that smell!

I’m also proud to say I am more focused on my running form to where I am not easily distracted by those juicy photos adorning the windows of such fast food restaurants as Jack in the Box, Carl’s Jr. and KFC. A lot of times after a run like this, I am eager to drive over to the nearest McDonald’s for a Sausage McMuffin with Egg sandwich. Even my dad cannot resist the tastiness of McDonald’s breakfast menu as it contains sandwiches far more succulent than the Big Mac or a Quarter Pounder. But as I find myself more committed to losing weight than ever before, I decided to skip a trip to McDonald’s even though it remains forever tempting.

And yes, we did get a hill to run up this time around. Grandview Avenue provides us with a hill which can seem never ending even though it is nowhere as steep as any hill Griffith Park has to offer us. I still find myself getting easily winded while running up a hill to where the walking breaks cannot come soon enough. With this training season, we are certainly in a rush to get to the tough stuff sooner rather than later.

By the time I ascended to the last half of Grandview Avenue, I finally caught up with my fellow T2EA/Pablove runners like Stephen and Glendale. They all cheered me on, waved to me, and they assured me the turnaround point was not far away. Once I made it to the turnaround, Coach James was there to encourage me on and to start picking up the mile markers as I was the last runner to reach them. You know it’s time to wrap things up when I’m finally on my way back to Griffith Park.

So, I didn’t keep up with my Pablove Marathon comrades, but I did get back to the starting point in one piece. Coach James suggested that I try a 2:1 pace next time and to keep as conversational a pace as possible. In the meantime, I am determined to get three maintenance runs in during the week instead of just two. Once again, I am taking this LA Marathon training more seriously than before, so watch out!

FUNDRAISING UPDATE: I am raising money for The Pablove Foundation, and so far I have raised $200 towards my fundraising goal of $1,500, and I could use your support. The Pablove Foundation is dedicated to finding a cure for pediatric cancer, and even the smallest donation will go a long way. Click here to find out how you can help.