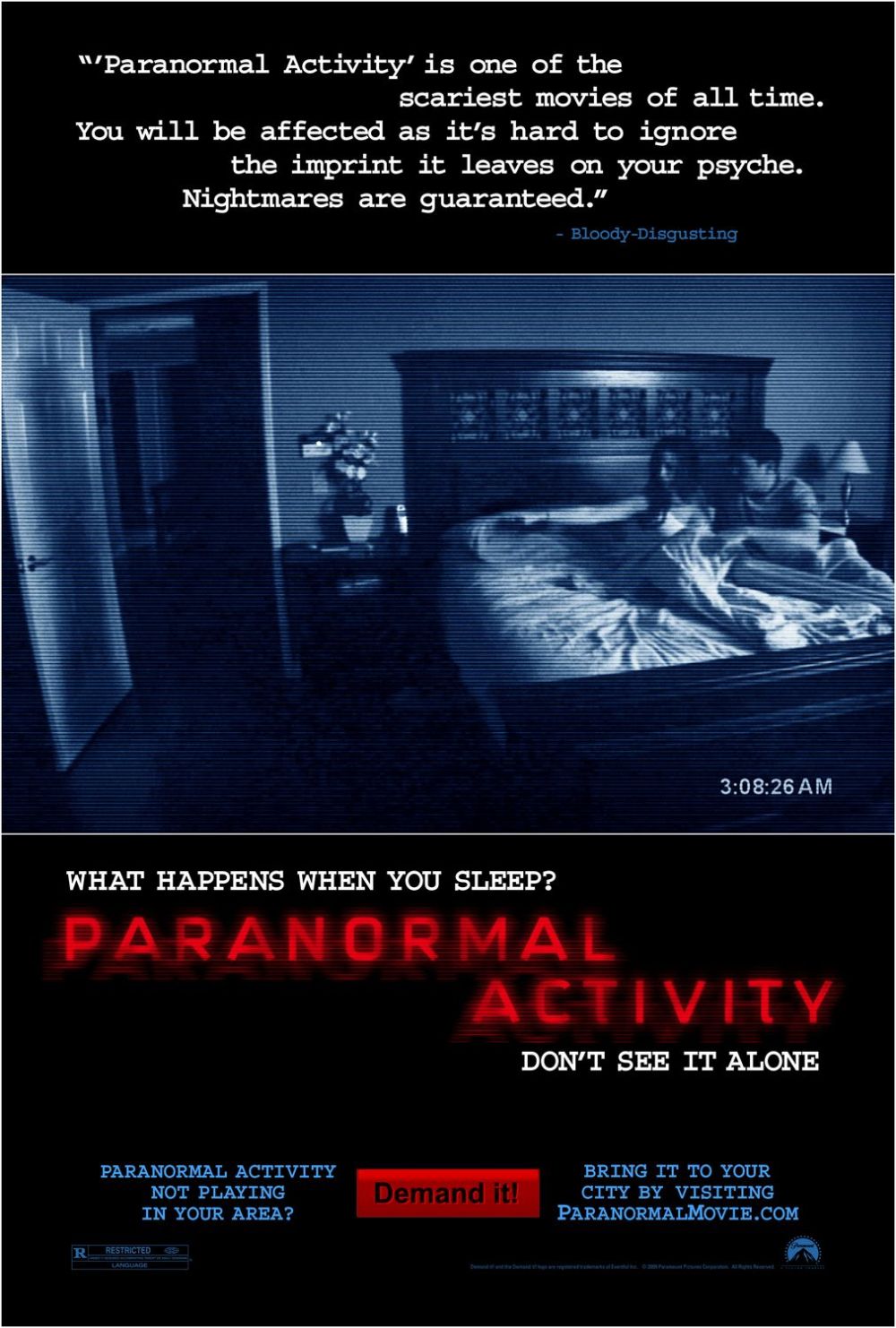 “I know something about opening windows and doors

Slipping the clippers through the telephone wires

The sense of isolation inspires

I like you lying awake, your baited breath charging the air

Intruder’s happy in the dark

I am the intruder…”

-from “Intruder” by Peter Gabriel

(sounds even scarier when he sings it in German!)

I finally got around to watching “Paranormal Activity” on Blu-Ray, and I truly regret not seeing this movie while it was on the big screen. How great it must have been to take in the audience’s reaction; watching all the ladies shriek and recoil into their lovers’ arms, and seeing guys who think they are so fearless jump out of their seats during some of this movie’s scariest scenes. I imagine the experience would have been like when I first saw “The Blair Witch Project” back in Irvine at a crowded art house movie theater. The last scene of that indie horror film had the audience completely freaked out, wondering if what we saw was real or fiction.

“Paranormal Activity” is an ingenious little horror movie which cost only $15,000 (excluding marketing costs of course) to make and made over $140 million dollars worldwide. It has joined the likes of “The Blair Witch Project” and John Carpenter’s “Halloween” as one of the most profitable independent films ever made and was released through Paramount Pictures which employed a unique strategy where audiences had to “demand” for it to be shown in their area via the internet. This strategy is probably what kept me from seeing the movie initially because prints of it had already been sent out to theaters all over the country, so the whole idea of participation was just an illusion to get people excited as they are led to believe they have the power. But getting past the overblown promotion which threatened to upstage it completely, “Paranormal Activity” is one of the most unnerving horror movies I have ever seen.

The word paranormal is a term used to describe unusual experiences that are outside of science’s ability to explain or measure (I think Dan Aykroyd has a PHD in this). This is exactly what’s going on in the home of Micah and Katie, a normal looking couple when we first meet them. Micah has recently purchased a video camera to capture what happens while they sleep at night. Katie has confessed to Micah and a psychic that a ghost has been haunting her since she was little, and she now believes it has followed here to their house in San Diego. They are both told by the psychic this ghost is a demon which feeds off of negative energy, and it will pursue poor Katie everywhere she goes. From the start, you know this is not going to end well for anybody.

Micah Sloat, like Katie Featherston, uses his first name for the character he plays. With him parading around the house with the camera, he could have easily been a character in George Romero’s “Diary of The Dead.” Like those college students studying film, Micah seems more interested in catching paranormal activity happening more than in helping Katie until later on, and he complete annoys Katie in the process. But he soon discovers there is a mysterious force intruding on their well-being as they sleep, and it puts them in the most vulnerable position possible.

Don’t worry, I’m not going into a scene for scene breakdown where I give away the best moments of “Paranormal Activity” as it is full of many hair-raising, jump out of your seat moments which deserve to be discovered with your own eyes if you dare. With a budget similar to the cost of hiring a celebrity bodyguard, director Oren Peli utilizes special effects very simple in their construction, yet incredibly effective when used. By filming in a typical suburban house, it feels no different from homes we grew up in. There’s nothing extravagant shown here, and that’s exactly the point. The more this home reminds you of your own, the scarier this movie becomes.

The suspense and tension which continually escalates throughout “Paranormal Activity” is accomplished through the power of suggestion. It does not contain the gallons of blood and gore most horror films employ. Not that I have any issues with gory movies, but what makes a horror movie all the more effective is when the filmmakers don’t you show everything. It’s what you think you see that really messes with your head as it forces your own fears and superstitions onto these characters throughout the film’s 90-minute running time.

Watching “Paranormal Activity” reminded me of a story my dad said he heard as a kid which scared him half to death. It involved some guy on TV talking directly to the camera about how that sound you heard behind you was probably nothing, or so you would think. But what if it was something sinister? What if that feeling of someone coming up from behind you was not just a feeling? Anyway, the more my dad talked about, the scarier it seemed.

Anyway, I bring this up because “Paranormal Activity” gets at a fear so universal and primal as we try to get a good night’s sleep, something which seems impossible these days without Ambien. Those little noises you hear right around you… What if they’re not just noises? What if someone is in the room with you? What if you didn’t lock all the doors and bolt all the windows? Peli plays will all the sounds which keep us awake at night, and the shocks these characters end up enduring easily resemble ones we have all experienced. It was a huge mistake to watch this film at night before I went to bed. I figured it would not be so scary as it was said to be while in theaters, but then again, I made the same mistake with “The Texas Chainsaw Massacre.”

Movies often benefit from a music score which can really escalate the powerful emotions the director has already captured. But as “The China Syndrome” and Michael Haneke’s “Cache” demonstrated, sometimes they benefit by not having one. I honestly think “Paranormal Activity” would have suffered if it had a score as one would have made several moments seem anticlimactic and premature as a result. The sound of loud footsteps from someone you’re not sure you know is scary enough as it is.

What Micah Sloat and Katie Featherston do act as much as they inhabit their characters here. They are not called upon to be Meryl Streep or Daniel Day Lewis. If we were to actually catch them acting, the illusion of the movie would have been completely destroyed. What both succeed in doing is acting naturally, and they make us recognize ourselves in them. We quickly come to recognize their fear and relate to it in a way we would rather not experience on a daily basis. These two were complete unknowns when this movie was released, and this elevates the sheer terror we feel for them as casting known actors would have taken away from the proceedings.

I also have to give credit to Mark Fredrichs who plays the psychic who visits Micah and Katie’s home. This role could have been an absolute cliché, one guy who comes across as a madman no one ever fully believes until it is too late. Seriously, this guy could have been just like that crazy old man from the first and second “Friday the 13th” movies who kept warning all those camp counselors, “You’re doomed! YOU’RE ALL DOOMED!!!!” But Fredrichs makes this character into a down to earth guy whose fear is quite palpable once he enters the peaceful looking home. Mark never overdoes anything here, and he more natural he is, the scarier this movie becomes. While the psychic is only on screen for a brief time, it is long enough to where he makes a forceful impression of impending doom.

They say “silence is golden,” but what is truly golden about “Paranormal Activity” is how silence is used so effectively. We’ve all had nights where we lie in bed and hear something fall in another part of the house, but maybe that something didn’t fall on its own. Maybe someone pushed it off to get our attention, to lure us out of our safety zone. Most movies are jam packed today with noise, but Peli recognizes how powerful the lack of sound can be, and he uses it to brilliant effect. I don’t know about you, but I need to be listening to something like soft music as I fall asleep. The quietness of the night has my mind racing when it should be resting.

Some will despise “Paranormal Activity” as nothing more than a gimmick while lacking the blood, gore, and occasional impalements and decapitations they feel are mandatory in a horror film. Others will hail it as a new horror masterpiece which will leave audiences extremely unsettled after leaving the theater. For me, this movie is definitely on the same level with “The Blair Witch Project,” a movie this one owes a huge debt to. It doesn’t try to blow us away with an overabundance of special effects, but with simplicity as the ordinary things are far more terrifying than monsters who wear hockey masks. Seeing a chandelier swaying back and forth definitely throws off my balance and makes me feel wide awake because I get so used to seeing it staying so still. Seeing a chandelier move from side to side in this movie gives the events an especially unsettling feeling.

Okay, I’m going to stop writing about this movie now. The thought of it is freaking me out, and I’m going to end up ripping down my shower curtain if I’m not careful.