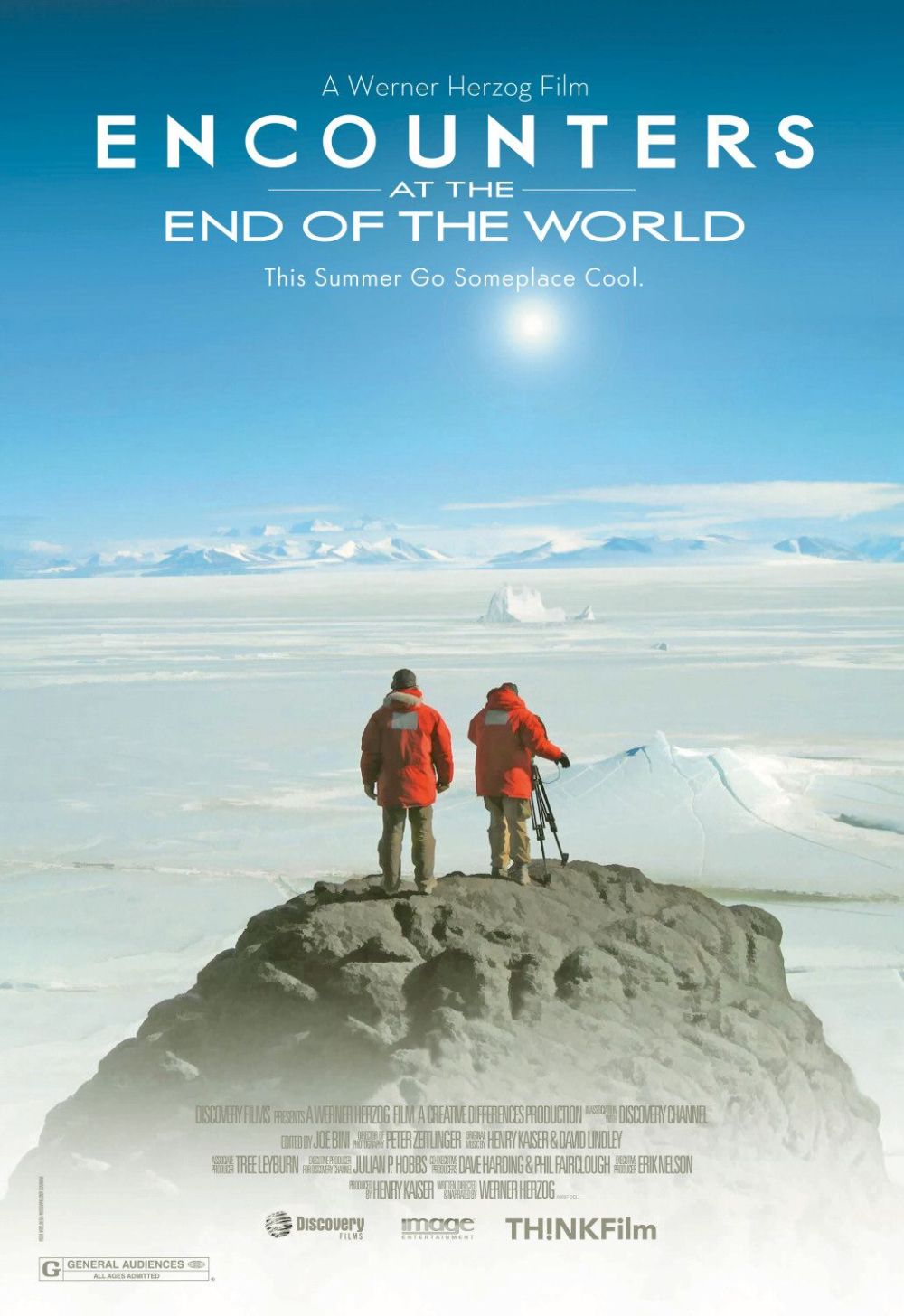 As a movie buff, I have to admit it is shameful on my part I have not seen more movies directed by Werner Herzog. I did see “Grizzly Man,” a brilliant documentary about Timothy Treadwell and his obsession with the grizzly bears, and like all brilliant documentaries made today, it did not get an Oscar nomination for Best Documentary. Thankfully, the Oscars did not ignore his documentary “Encounters at the End of the World” which is an endlessly fascinating look at his travels and discoveries in Antarctica. It is at times an incredibly beautiful look at an icy landscape, at others a bleak look at the inevitable end of the human race. At the same time, it also a rather humorous and interesting look at the people who risk their lives by living there to study the cutting-edge world of science.

Herzog narrates “Encounters at the End of the World,” and he allows us to go inside his head on how he views the icy wilderness of Antarctica, and of how he views the people and wildlife there. He makes it clear from the onset that when he was asked by Discovery Films to do this documentary, he agreed to it on the condition he would not be forced to do a “fuzzy” movie with penguins in it (a little jab at “March of the Penguins”). The first 10 or so minutes deal with the McMurdo Research Station which is full of buildings and tractors constantly moving all over the place. Herzog finds himself wanting to get away from McMurdo right away as he feels it is corrupting the Antarctic island with the inhabitants’ own self-interests as it is filled with horrors there like “yoga classes.”

Eventually, he ventures out of the encampment and into the far-off research facilities removed from the town. We see him and others there being put through safety drills and emergency preparations to deal with the worst of circumstances. The group leader speaks of how the wind can get so bad to where you can’t see even your hand in front of your face or hear yourself talk. This lends a chilling effect to an already chilled environment, and while it is exciting to be there, you feel the danger of it throughout.

The best part of this documentary, and the reason I wanted to see it, is the underwater footage where you follow divers underneath the glaciers of Antarctica. The visuals on display here are both beautiful and extraordinary to see, and there is a unique beauty to the underwater landscape you would be hard pressed to find anywhere else. This is all reminiscent of James Cameron’s documentary “Aliens from the Deep” in which he went with scientists in submersibles down to the bottom of the ocean to see what things live down there. But while Cameron’s documentary was fascinating, this one is not encumbered with 3D effects and of looks at where the future will take us. It deals with the world we exist in right now, and it doesn’t hide from how everything will disappear in the distant future.

I was also eager to find out how these scientists were able to dive down into waters which they would not be expected to stay alive in for more than 5 minutes. They wear special suits which are heavily insulated to protect them from the cold, and they wear gloves that threaten to make them look like aliens from another planet. Herzog says the water they are diving into is -2 degrees Celsius, and the divers go in with no ropes attached to their bodies as it will give them more room to move around. Still, this is very dangerous work they are doing, and if they get lost underneath the glacier, they will become a permanently frozen resident. You feel the danger of what they are doing, but you end up getting overwhelmed by the spectacular visuals they discover underneath it all.

Another fascinating moment comes when some scientists on the island play recordings of the sounds the local seals make underwater. The seals themselves steal some scenes from the human actors as they lie back lazily in the sun and look too tired to get up and acknowledge anybody. The underwater sounds of the seals seem so unreal, and I could not help but believe they were all computer generated. But they are indeed the real thing, and you experience the sounds along with Herzog and the scientists as they put their ears down to the ground and take it all in. It’s an amazing moment to witness.

The other thing I really loved was how it was just not another average science documentary filled with talking heads telling you all the things you need to know about the environments they are studying. There is science talk throughout the documentary which is fine, but Herzog also looks at the individual personalities he comes into contact with throughout his journey. Along with Herzog, you also wonder what could make all these people come to one of the most isolated places on the face of the earth and of how they stay there for so long.

Among the people Herzog meets throughout his travels are a philosopher who has a great quote at the end of the movie about how the universe is looking at itself through our eyes, and how we give life to everything in the way we view it. We meet one of the scuba divers who has a pensive moment where he takes in the fact he is about to making his very last dive into the icy depths. Then Herzog meets up with a Russian who had escaped the Soviet Union after the fall of the Iron Curtain, and the Russian almost loses it emotionally when he tries to describe to him how bad things were when he left. This Russian also has an escape plan at the ready with a big pack of supplies in case he needs to flee once again.

There are a couple of other people in the documentary who just talk and talk about themselves and the adventures they have been on. Herzog cuts them off in his narration by saying, “To make a long story short…”

“Encounters at the End of the World” does have a bleak view of humanity’s future, and the scientists are fully aware of this as temperatures continue to rise to where it is inevitable that ice will eventually melt completely in the future. This is also shown as we see a group of scientists watching “Them,” a 1950’s B-movie about radioactive ants which have grown to an enormous size. It turns out to be one of the many apocalyptic movies they show to each other from week to week. I wonder if they have ever gotten around to watching John Carpenter’s “The Thing.”

At the center of “Encounters at the End of the World” is not just Antarctica, but Herzog himself. His narration throughout could have been annoying, but it serves to illuminate what a funny and interesting person he is. Clearly, he is attracted to madness in various forms throughout the world as is shown here and also in “Grizzly Man.” I imagine this is a big theme in all of his movies. We discover all there is to see through his eyes, and of how he views the beauty of the ice and how it forms. As a result, it does make me want to see more of his movies.

Just remember what one of the men says in this documentary, and remember it always: