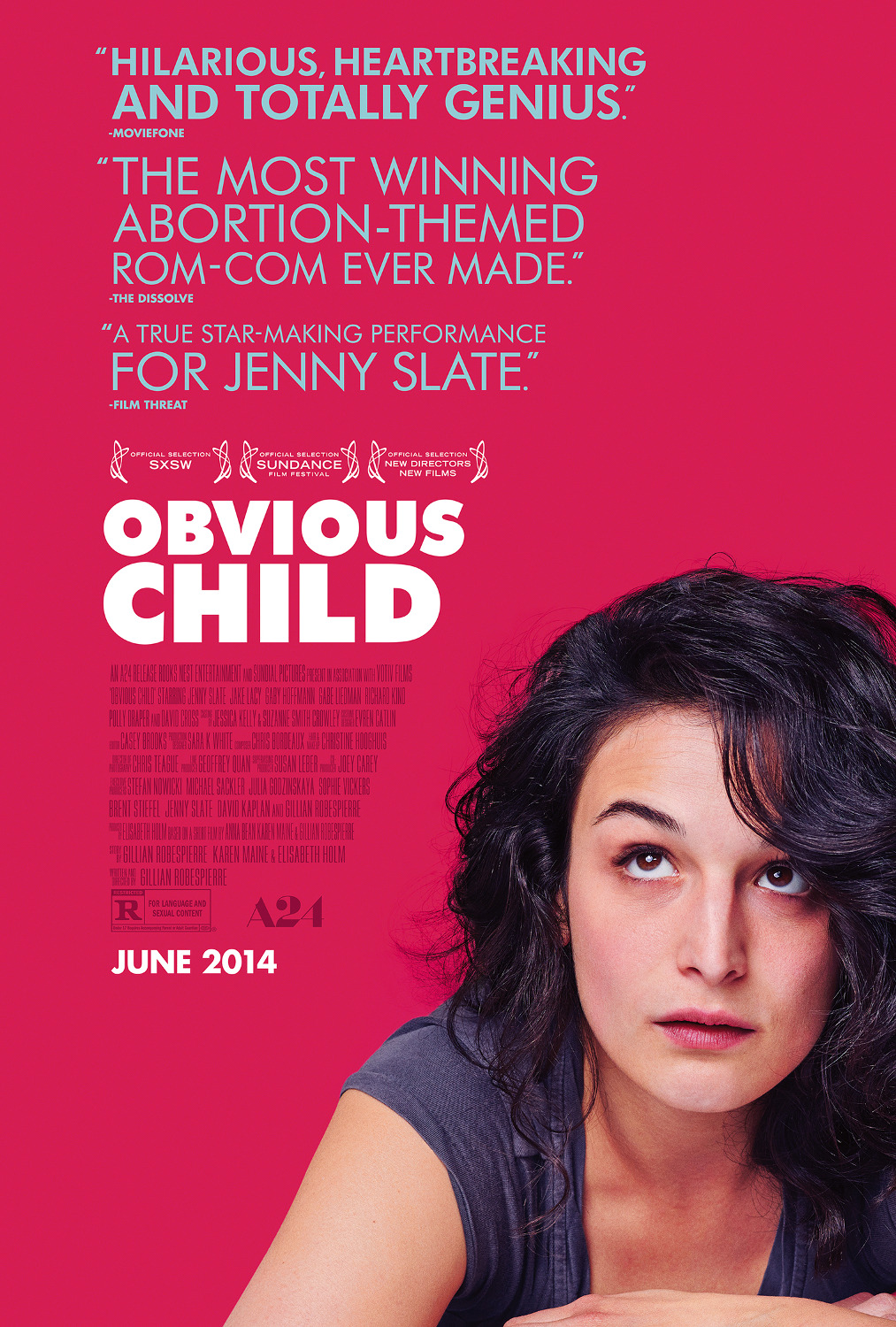 Uh-oh, I think I’m becoming a fan of romantic comedies. For the longest time, I have been avoiding them like the plague as they feature characters whose problems don’t even compare to what I go through, dialogue which makes me cringe in such an incredibly painful way, and acting that is embarrassing and flat. But just as the genre looks to be finally dying out, 2014 brought us movies like “What If” and “The One I Love” which succeed in reinvigorating it to where I got surprised in a way I didn’t expect. But moreover, these movies have provided us with down to earth characters we can actually relate to instead of sneer at in bitterness.

Of all the romantic comedies released in 2014, I doubt I will see one better than “Obvious Child.” It marks the feature film directorial debut of Gillian Robespierre, and it’s a very confident and assured debut as she follows the trials and tribulations of a twenty-something woman whose life hits a low point which leaves her in a depressed funk. It also deals with a very touchy subject in a way both intelligent and very refreshing, and that makes this rom com a brilliantly subversive one.

Former “Saturday Night Live” star Jenny Slate stars as Donna Stern, a comedian and bookstore employee who is about to go through one of the worst periods of her life. “Obvious Child” starts with Donna’s boyfriend dumping her which leaves her utterly devastated, and then she is informed the bookstore she works at will be closing which will leave her out of a job. This leads her sinking into a depressed state which results in one of her worst stand up gigs ever, but on that same night she meets a really nice guy named Max (Jake Lacy) with whom she strikes up an easy-going conversation. From there, the two of them have a night of fun where Max accidentally farts in Donna’s face, and they end up having sex after an exuberant dancing session to Paul Simon’s “The Obvious Child,” a song from which this movie gets its name.

Not long afterwards, Donna discovers this one-night stand has gotten her pregnant, something she is not the least bit prepared for. As a result, she decides to get an abortion but finds she has to wait a few days before the doctors can perform the procedure. During this time, she wonders about whether or not to tell Max about her decision, and the movie chronicles her journey towards the best/worst Valentine’s Day she has ever had.

Many have been describing “Obvious Child” as the first ever abortion comedy, but that description doesn’t do it justice. Yes, abortion is a theme here, but it’s not what this movie is about. The main focus is on how Donna’s unplanned pregnancy forces her to confront the realities of independent womanhood for the first time in her life, and it proves to be a journey both rough and, at times, truly hilarious.

Many of us remember Slate from her brief stint on “SNL” where she accidentally let the F-word slip out of her mouth. She left after only season, but she has since made a name for herself on “Parks & Recreations” and “Marcel the Shell with Shoes On.” Slate’s performance in “Obvious Child” proves to be a huge breakthrough for her, and you just want to hug her after watching this movie. She infuses Donna with a lot of heart and makes you relate to her struggles as life constantly throws an endless number of curveballs in her direction, and we get so emotionally absorbed in Donna’s journey as she faces up to her responsibilities and rises above her misery which threatens to consume her completely. Slate is both warm and funny at the same time, and that’s not always an easy combination to pull off. It’s one of the best performances from an actress I have seen this year.

Slate is also backed up by a terrific supporting cast which features characters who come to reveal things about themselves we wouldn’t otherwise have known. Gaby Hoffmann is wonderful as Donna’s friend and roommate Nellie, Richard Kind is drolly amusing as Donna’s father Jacob, Polly Draper has some very moving moments as Donna’s mother Nancy, Gabe Liedman is a hoot as everyone’s gay best friend Joey, and David Cross has some hilarious scenes as Sam, a comedian and a guy who just doesn’t get what’s going on around him.

I also have to give Jake Lacy a lot of credit as he makes Max a truly nice guy we never find ourselves snickering at. Roles like these are often very bland and don’t give actors a lot to work with, but Lacy makes you believe Max is the real deal and the kind of significant other we all hope to find in our own lives. Max could have been the most boring and thankless character in “Obvious Child,” but Lacy keeps him from becoming this with a lot of humor and charm.

When it comes to the abortion issue, which has already split people on “Obvious Child” (particularly those who haven’t even bothered to see it), Robespierre handles it in a manner which is actually very refreshing. She’s not out to demonize abortion, but she also doesn’t make light of it either. In this Roe vs. Wade world we have been living in for the past few decades, I’m surprised we haven’t had more movies like this one.

Robespierre has created a truly wonderful film I am very eager to see again soon, and it’s one of the most intelligent rom-coms to come out in some time. “Obvious Child” really left a smile on my face as I walked out of the theater. Regardless of whether or not you have gone through what Donna has, or whether you’re a man or a woman for that matter, you can sympathize with what she goes through as we have all hit a rocky point in our lives. What’s great is how she rises above her problems and becomes a stronger person as a result. Robespierre and company confront the painful moments in these characters lives with a lot of intelligence and warmth, and it’s also really funny. It’s deep, but it also had me laughing a lot.