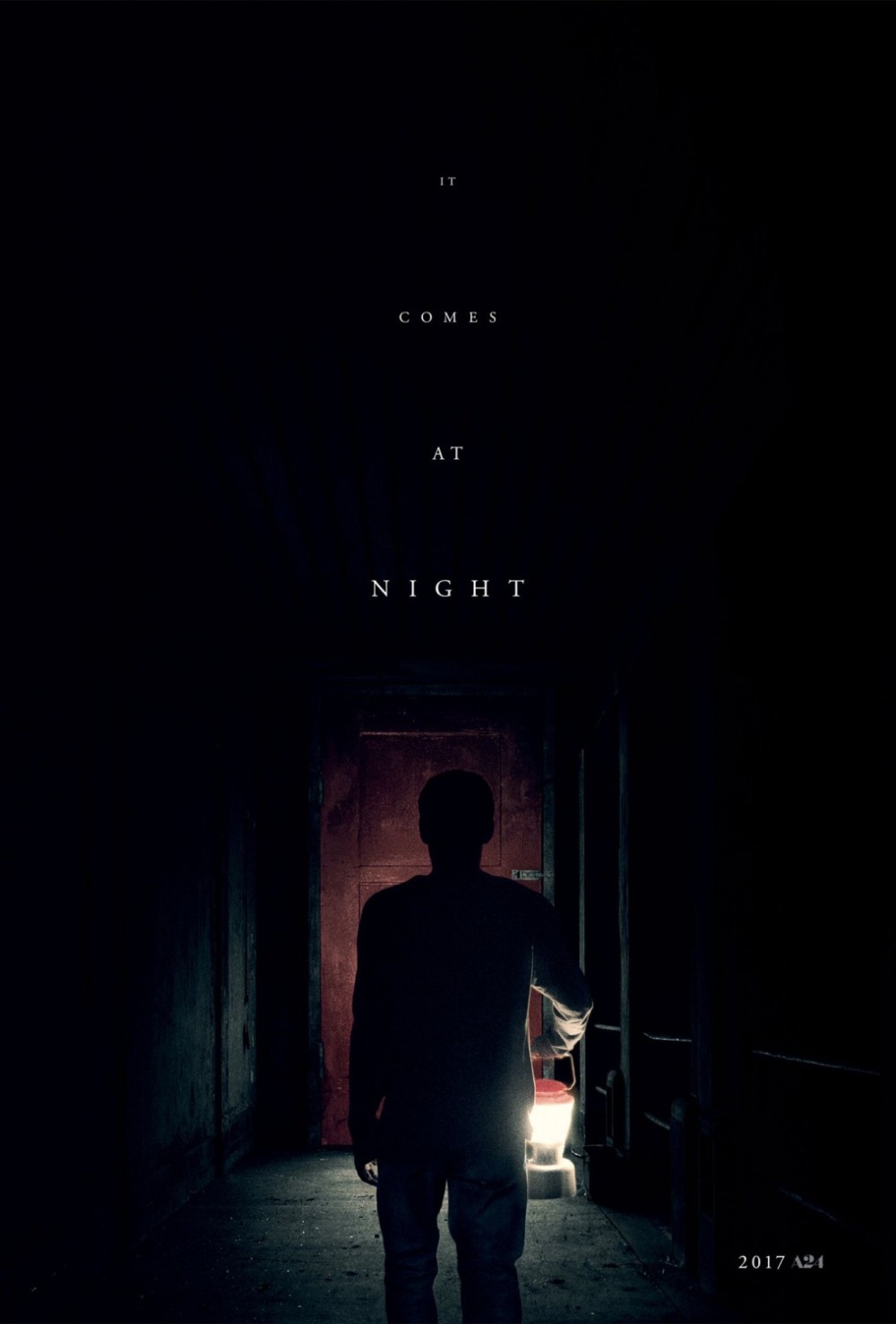 “It Comes at Night” cannot and should not be mistaken for your average psychological horror movie. Whereas the average genre film aims to delineate who the good guys and the bad guys are, no such distinction is made here as writer and director Trey Edward Shults has rendered the characters to be all too human. We understand their wants, needs and motivations very well, and this makes the movie even more unsettling than it already is.

We are introduced to Paul (Joel Edgerton), his wife Sarah (Carmen Ejogo) and their teenage son Travis (Kelvin Harrison Jr.) as they lay Sarah’s father, Bud (David Pendleton), to rest in a most uncomfortable way. We soon learn the family has secluded themselves in their country home as some highly contagious disease has since laid waste to the world. Along with their dog, Stanley, the family keeps themselves out of danger by staying locked up at night when the danger which threatens humanity is at its most powerful point.

But their bubble is suddenly threatened when a stranger named Will (Christopher Abbott) breaks into their home, believing it to be unoccupied and in desperate need of supplies for himself and his family. After tying Will to a tree overnight to confirm he is not infected by the disease, Paul decides he is worth helping and succeeds in bringing Will’s wife, Kim (Riley Keough), and their son, Andrew (Griffin Robert Faulkner), to safety to where they are all leaving under the same roof. But even as they come to settle down comfortably with one another, the inevitable conflicts arise which will force them into a game of survival no one can back away from peacefully.

Shults made an unforgettable directorial debut with “Krisha” which was one of my favorite movies of 2016. While “Krisha” was an emotionally pulverizing motion picture, “It Comes at Night” is one which mercilessly plays with your head as it taps into your fears of the things you can’t see or understand. Paul, Sarah and Travis rarely stray far from their country home as just about everything outside of seems all too threatening to confront. Whether or not you think Shults gives the “it” of the movie’s title a clear definition, it won’t matter. The it could be anything. It could be a supernatural force, an incurable disease, or perhaps it is the realization of the violent deeds we are capable of committing when pushed to our breaking point.

“In order to appease the gods, the Druid priests held fire rituals. Prisoners of war, criminals, the insane, animals… were… burned alive in baskets. By observing the way they died, the Druids believed they could see omens of the future. Two thousand years later, we’ve come no further. Samhain isn’t evil spirits. It isn’t goblins, ghosts or witches. It’s the unconscious mind. We’re all afraid of the dark inside ourselves.”

I put the above quote from “Halloween II” up above because those words were playing in my head while watching “It Comes at Night.” Looking at these characters, you can tell they were once decent people who wanted nothing more than to raise their families and live in peace, but the state of the world has forced them to defend what is theirs in a way they never thought they would resort to. This is especially the case with Paul who has long since become handy with a shotgun and disposing of corpses. But Edgerton, who is excellent as Paul, eventually shows the character at his most vulnerable state as he comes to see not just the person he has become, but the person he always was.

Shults shows the fears of all these characters reaching their peak at nighttime when fear and paranoia combine to create a more hostile environment than the one outside their front door. Speaking of the front door, it is painted a dark red as horror movies always feature a red door or two, and Paul makes it clear to everyone how the door must always stay locked at night, always. As Roger Corman once said, one of the scariest images in any movie is the closed door. So, when the door moves suddenly is ajar, Shults has us right in his grasp to where we are sitting straight up in our chairs.

In addition to Edgerton, Carmen Ejogo and Kelvin Harrison Jr. provide strong support as Paul’s wife, Sarah, and their son Travis. Together, they portray a family much like any other, struggling to survive in an increasingly insane world. Christopher Abbott, so good in “James White,” inhabits the character of Will with both a tense desperation and an easy-going attitude as he settles in with Paul and his family. This is an actor incapable of faking an emotion, and his performance in “It Comes at Night” is the latest example. Riley Keough is also excellent as Will’s wife, Kim, as she makes her an enigmatic presence to where you don’t know whether to hug her or keep your distance from her.

In making everything seem so down to earth, “It Comes at Night” does suffer as things become more underplayed than they should have been. There were times where I wished Shults had injected more energy into the story as things begin to feel way too subtle. Still, when the movie works, it really works as the tension builds to a fierce climax where I could not find myself rooting for one person over the other. Shults is also assisted by his “Krisha” collaborators Drew Daniels whose cinematography makes the darkness these characters live in all the more threatening and claustrophobic, and by composer Brian McOmber who provides another unsettling score which builds up an already intense motion picture into something feverishly intense.

The ending of “It Comes at Night” proves to be both infuriating and utterly haunting as we are left to wonder what will become of whoever is left. It feels like the movie ended sooner than it should have, but perhaps it would have been unfair to ask Shults to give us something more definitive. Still, it’s nice to see something like this occupying the local movie houses alongside the summer blockbusters as it gives us a lot to ponder once the lights come up.

As for myself, the post-apocalyptic setting of this movie is almost secondary to the one thing which should matter the most to these characters – trust. Whether we are living in the best of times or the worst of times, trust is the one thing we need more than anything else to survive one hard working day after another. Without trust, how can we survive in a crazy world? “It Comes at Night” confronts the issue of trust head-on, and it is devastating to see it break down amongst characters who might otherwise have no problem living under the same roof.