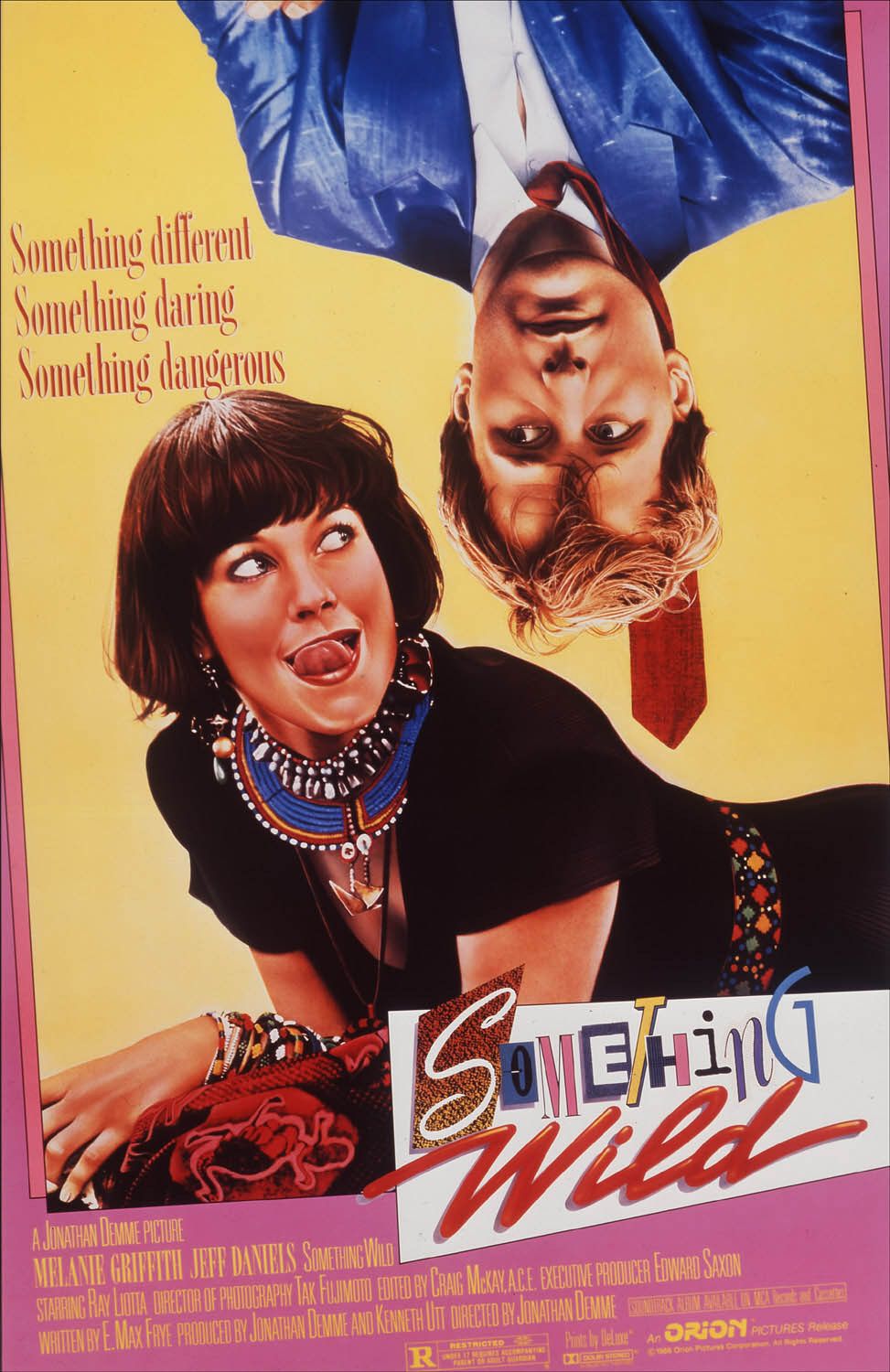 I got to revisit “Something Wild” recently at New Beverly Cinema, and it quickly reminded me of what a unique filmmaker Jonathan Demme was back in the 1980’s. He had a wonderfully offbeat approach to making movies few others did at the time, and they functioned as parties he gleefully invited us to time and time again. This style of filmmaking disappeared in the 1990’s when he made “The Silence of the Lambs,” and while it is one of the best movies ever made, it marked the beginning of his work having a darker and less playful look to them. This is not to take away from his resume since as it includes such great movies as “Philadelphia,” “Rachel Getting Married” and a number of Neil Young documentaries, but watching “Something Wild” made me realize how much I miss Demme’s earlier style of filmmaking as it was more joyous and anarchic than much of what he has made since.

Jeff Daniels stars as Charles Driggs, a conservative looking banker whose wife and kids have since left him. We catch up with him while he is eating at a diner in the urban part of New York, and he suddenly decides to leave without paying his check. However, he is caught in the act by Lulu (Melanie Griffith) who confronts him about his felonious act and sees a rebellious side in him she is eager to exploit. From there, she offers to drive him back to his office and ends up kidnapping him on an adventure which flies in the face of everything considered conformity.

When Lulu gets a hold of Charles’ pager (yes, this movie was made a long time ago) and throws it out her car window to his utter shock, we are along for the ride as she brings out a side of him he has not exercised for quite some time. What I love about “Something Wild” is that, while Lulu essentially kidnaps Charles against his will, it tapped into something deep within me to where I would be open to her taking advantage of me. What Lulu does is force Charles to abandon his normal lifestyle and engage in something adventurous, and there’s a point in all our lives where we want to break out of a lifestyle which eventually becomes much too stifling for our own good. Granted, common sense usually kicks in as we can’t afford to get into the kind of trouble they get into in this day and age, but this is why we go to the movies: to experience things we have the knowledge to avoid in real life.

We are with Charles as Lulu takes him on an adventure no one could easily prepare for, and it makes what we watch in “Something Wild” all the more exciting. The movie digs into our deepest desires as these two engage in an unexpected road trip which has the two of them falling in love. Things, however, take a sharp turn when Lulu’s husband, Ray Sinclair (Ray Liotta), comes back into the picture and threatens to destroy their newfound coupling with his Svengali and violent ways.

It’s fun to watch Daniels in this role as he makes the squarest of human beings appear more charismatic than what was on the written page. This could have been a thankless role in the hands of another actor, but Daniels makes Charles’ transition from a conventional banker to a love-struck man determined to save the woman he has fallen in love with very believable to where we are with him every step of the way. Daniels’ career had nowhere to go but up from there as he went on to deliver brilliant performances in “The Squid and the Whale,” “Steve Jobs” and “Dumb and Dumber.”

Griffith’s career was at its height in the 80’s as her performances in “Working Girl,” “Body Double” and “Stormy Monday” showed us she was an actress who did not back down from a challenge. Her performance as Lulu, who is later revealed to be Audrey Hankel, is one of her best as she fearlessly portrays a character who is as free-spirited as she is reckless in her law-breaking ways which allow her to live life on the edge. At the same time, Griffith gives Lulu/Audrey a vulnerability which makes her performance all the more fantastic as even she comes to see her fling with Charles has become much more than that.

But then along comes Ray Liotta as Audrey’s violent ex-husband, Ray Sinclair, who steals the show. The audience at New Beverly Cinema applauded loudly when the actor made his first appearance in “Something Wild,” and it’s not hard to understand why. From the moment he arrives onscreen, Liotta gives us an infinitely charismatic villain we can’t take our eyes off of. We know he’s dangerous, but like Daniels’ character we can’t help but go along with him on a ride. You know he’s bad for you, but Liotta’s unpredictability keeps us pinned to our seats. He is mesmerizing as he fights to get Audrey back into his life even as she struggles to break free of him once and for all, and he makes it easy to see why it is not at all easy to get rid of him.

Demme pulls off the impossible here as the screenplay written by E. Max Frye starts off as a road movie and then turns into a domestic thriller. Such a shift can be jarring in a movie, but Demme keeps everything running smoothly even as the story heads into darker territory. By the time we are introduced to the devious Ray Sinclair, we have come too far with Charles and Audrey to just give up on them.

The director also works with a colorful palette which keeps things feeling light even as we head towards a violent conclusion. He also provides us with a terrific soundtrack with choice tunes from Fine Young Cannibals, New Order, Oingo Boingo and David Byrne. This is not to mention Demme’s usual cast of actors he has worked with constantly like Charles Napier, Tracey Walter, Sister Carol and Gary Goetzman who bring their unique energies to the roles they are given, and they make us remember their characters long after we have left the theater. There are also some inspired cameos from filmmakers John Sayles and John Waters, and Waters’ cameo is as priceless as the expression on his face when Audrey offers him a bribe.

Looking back at “Something Wild” makes me realize what a uniquely talented filmmaker is as he cheerfully invites us on a ride which goes against what’s normal and becomes all the more exhilarating as a result. Some filmmakers try to keep you at a distance from their characters’ exploits, but Demme instead offers you a front seat to the action, and it results in a truly irresistible time at the movies. In addition, his casting choices here are perfect, and you can tell the actors are having a blast with the material they have been given.

I find it good to see a movie like this every once in a while as it makes me question whether I have become too complacent in my life. Granted, I wouldn’t be that quick to jump into a car with a complete stranger behind the wheel unless it was a Lyft ride I requested, but to be taken on a ride which allowed me to break out of the routine of life feels absolutely necessary as time continues to speed up as we get older. Demme understands this, and he makes “Something Wild” into an invitation we movie buffs would be foolish to turn down. It remains as entertaining today as it did back in 1986.