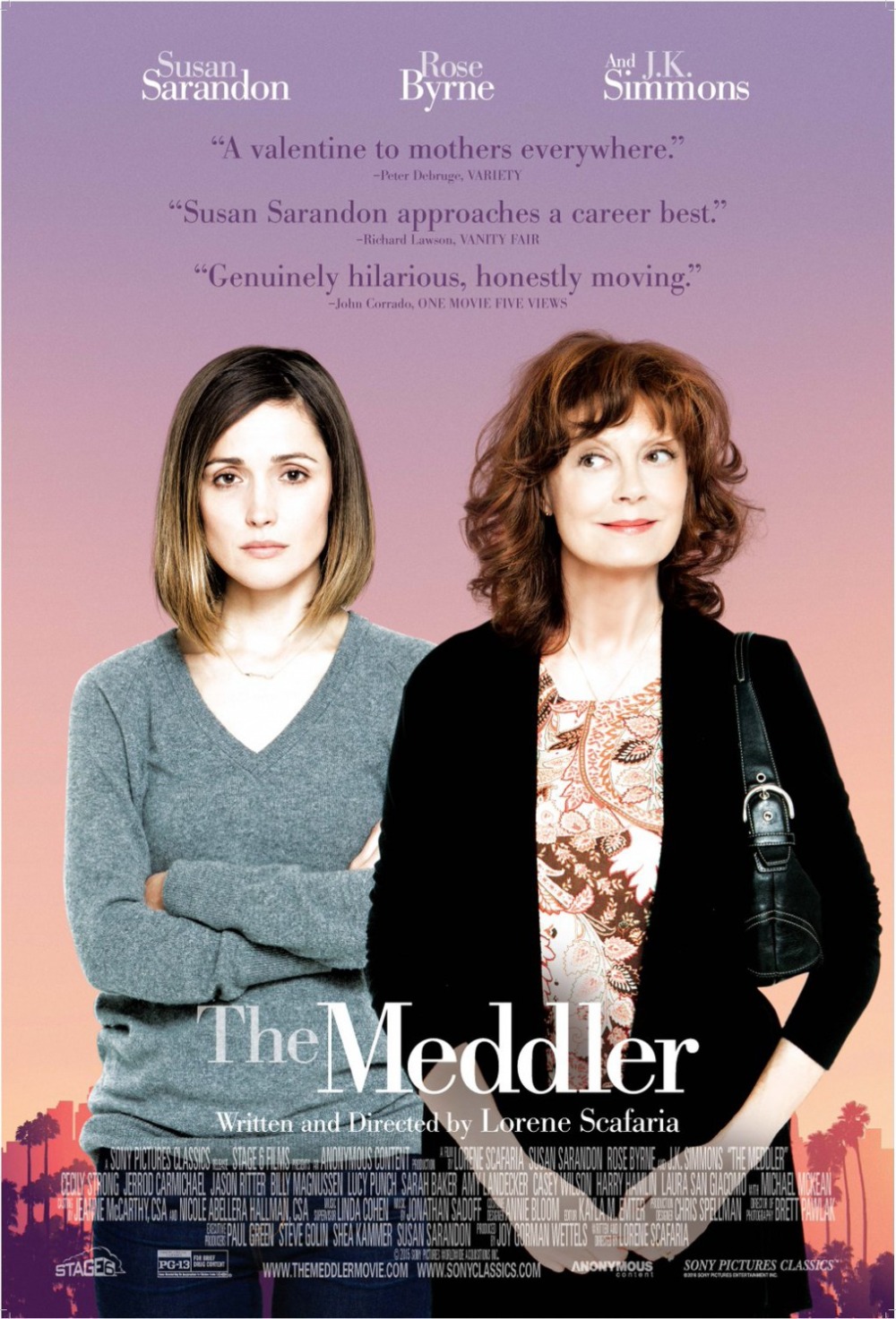 When reading the plot synopsis of “The Meddler,” I walked into it expecting a formulaic comedy dealing in stereotypes like “My Big Fat Greek Wedding” did. Not that working with stereotypes is always a bad thing, but it can get old very quickly and leave audiences with not much that is worth remembering when they leave the theater. Plus, the movie’s story deals with a parent interfering in the life of their offspring at the most inconvenient time in their life, and how many times have we seen that before? We all know it will build up to that moment where the offspring will say, “Mom, I love you but will you PLEASE GET THE HELL OUT OF MY LIFE??!!” But despite this inescapable confrontation, we know everything will work out in the end.

Well, “The Meddler” turned out to be a pleasant surprise as it is a movie made from the heart more than anything else. A lot of it has to do with the fact writer and director Lorene Scafaria (“Seeking a Friend for the End of the World”) based the story on her own mother and the relationship she had with her. But while this might sound like a buddy comedy, it’s really more about the mother and it gives Susan Sarandon one of the best roles she has had in recent years.

Sarandon plays Marnie Minervini who, as “The Meddler” begins, is staring listlessly at the ceiling fan in her bedroom. We learn Marnie was recently widowed and has since moved from the east coast to Los Angeles to be closer to her daughter Lori (Rose Byrne). As the title suggests, she endlessly interferes in Lori’s life and then goes on to help others whom she feels need her assistance. But deep down she is still struggling with the loss of her husband, someone she was with for decades and who has now vanished from her life. While she looks very pleasant on the outside, Marnie is still struggling to come to terms with her husband’s death and is trying to find new meaning in her life.

What I loved about Sarandon’s performance is how she avoids the easy trap of turning Minnie into a simple caricature and instead turns this character into this wonderful human who is infinitely generous to a fault. Even as Minnie gets a little too involved in her daughter’s life, Sarandon never makes her seem the slightest bit aggravating. It’s also great fun to see her roam around The Grove as if it were Disneyland because it shows just how new to Los Angeles Minnie really is.

Sarandon also has a great foil to work with in Rose Byrne who plays Minnie’s daughter Lori. Byrne also could have made Lori, a writer for television, into a caricature, but she makes her into someone with work problems we can all relate to regardless of whatever industry we work in. Lori is enduring a lot of problems in her life other than her mother such as being dumped by her celebrity boyfriend Jacob (Jason Ritter) which still weighs heavily on her, and she is not sure how she can move on past her heartbreak. Ever since the scene in “Neighbors” where she succeeded in getting two college students to seduce one another, she has remained a terrific actress and one with very sharp comedic skills.

During “The Meddler,” Minnie is met by a couple of men who are eager to get to know her better. One is Michael McKean’s overly earnest Mark whose idea of a date is to take Minnie to the Holocaust Museum, but it’s hard to imagine anyone getting romantic over there. McKean is always fun to watch no matter what movie he’s in, and he makes the most of his limited screen time as a guy who can’t quite take a hint.

The other suitor is a retired cop turned movie set security guard who goes by the name of Zipper, and he is played in a scene-stealing performance by J.K. Simmons. While being upstaged somewhat by an awesome looking mustache, Simmons makes Zipper into a uniquely lovable guy, and he is wonderful to watch as he introduces Sarandon to his nest of chickens. We’ve seen this Oscar-winning actor go from playing a warm-hearted father in “Juno” to an insanely brutal music instructor in “Whiplash,” and this is not to mention his terrific work in the first three “Spider-Man.” But in “The Meddler” Simmons gets to play a role many of us haven’t seen him play before, a romantic leading man, and he pulls it off beautifully.

What makes “The Meddler” an especially strong movie is how genuine it is in its emotions. Not once did its story feel the least bit manipulative, and its portrait of people trying to move past the loss of a loved one feels authentic in its portrayal. Nothing ever feels cloying or artificial, and it also helps that Sarandon, Byrne, and Simmons are surrounded by a wonderful cast which includes “SNL’s” Cecily Strong, Lucy Punch (the moment where she tosses a baby shower gift aside is priceless), Jason Ritter, Casey Wilson and Jerrod Carmichael. Each actor succeeds in creating unique characters who are fun to hang out with, and watching them is a reminder of how there is never a role too small for an actor to play.

Although it deals with the heavy subjects of grief, heartbreak and losing a loved one, “The Meddler” proves to be a very positive movie which is optimistic in its view of life. In a time where many movies feature infinitely cynical characters, here’s one with a woman of a certain age (and lord knows there’s not enough of those) who is very giving and generous. Even when she appears to be more generous than anyone should be, we keep watching the movie with the hope her spirit will stay strong during even the toughest of times.

“The Meddler” was made on a low budget and on a very shooting schedule, and everyone involved succeeded in giving us something much better than we could have expected. Please don’t let the fact it is not a superhero movie keep you from checking it out.