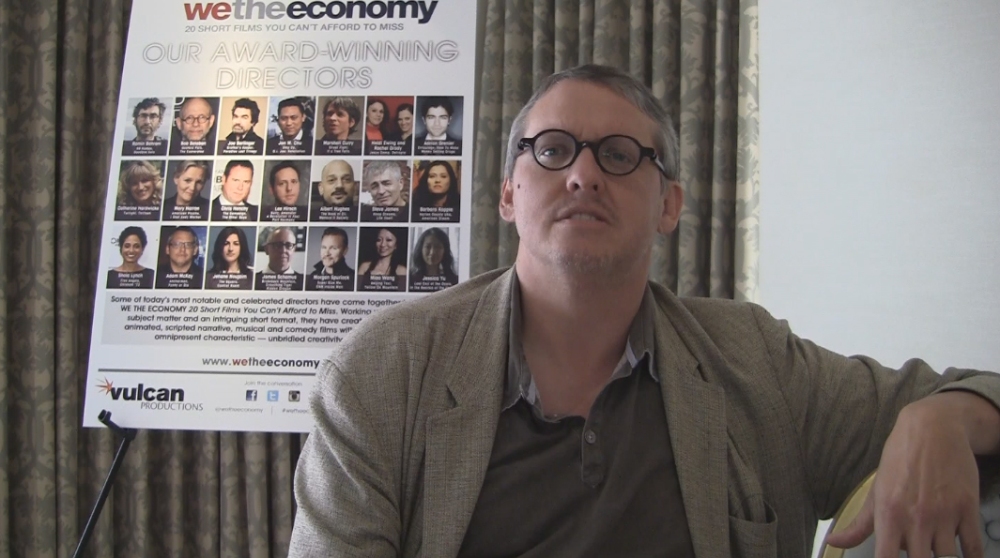 “The Unbelievably Sweet Alpacas” is one of 20 short films which make up “We the Economy,” a series that uses innovative story techniques to give us a better understanding of the U.S. economy. This particular short film was directed by Adam McKay, best known for directing the “Anchorman” movies, “The Big Short” and for co-founding the comedy website “Funny or Die,” and it’s an animated short film and a thinly veiled parody of all those “My Little Pony” cartoons children are still crazy about watching. It takes place in a magical land filled with long-lashed, multi-colored Alpacas who love lollipops, rainbows, and friendship, and they have just graduated from school and are looking to get well-paying jobs in the business world. But once they are made aware of the sharp divide in wealth distribution which mirrors America’s, the growing evidence of inequality gap makes them turn against one another with hilarious results.

A press day for “We the Economy” was held at the London Hotel in West Hollywood, California, and McKay was one of the directors who attended it. “The Unbelievably Sweet Alpacas” is not only the funniest short film in this series but also one the most informative. McKay said the inspiration for it came in part from his kids watching “My Little Pony” cartoons all the time, but another one came from an unexpected source.

“There was actually a documentary about the richest building in New York City on Park Avenue, and it was made by Alex Gibney and it was called ‘Park Avenue (Money, Power and the American Dream),’” McKay said. “He describes how the children of the super billionaires would always come through the lobby and be so friendly with the doorman, and the doorman would go, ‘How was your soccer game?’ And then the doorman described how one day when they were like 11 or 12, the light just went off. It was like someone had told them you were different and they no longer connected with the doorman. The guy was talking how sad that is, and so I think just vaguely that was in my mind that when you’re a kid, these differences don’t mean anything. And then when they become real, all of a sudden you’ll notice all the alpacas start fighting with each other and they’re no longer friends. So yeah, I think we’ll give Alex Gibney credit for that.”

Making this short film also proved to be very educational for McKay as it made him fully aware of just how bad income equality is in the United States.

“I was shocked,” McKay said. “I came in knowing that the U.S. had a problem with income inequality, but I didn’t know just how bad it was and that our upward mobility was so stagnant and that it’s actually not that great in the U.S. I was shocked about the numbers about the middle class. Our middle class has almost completely evaporated. I knew we were bad, but then when I worked with Adam Davidson and looked at the actual numbers… Damon actually contacted us and was like, ‘I think there was a mistake made when you said 50% of the wealth went to the top .1%.’ We’re like, ‘No, that’s not a mistake.’ And I had the same reaction he did which was like, that’s gotta be a typo.”

“I didn’t know that we are by every definition of the word in the U.S. an oligarchy. I had no idea that that was the case,” McKay continued. “A strict definition of oligarchy, that is the U.S. more so than Russia or China than any country you can think of. It’s a little depressing but at the same time a good opportunity to let people know about these numbers.” 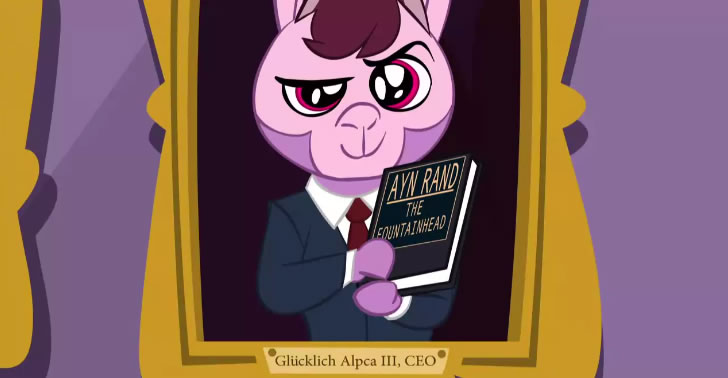 One of the images which really stood out in my mind was when the Alpacas are shown a portrait of a company CEO who is shown holding a copy of Ayn Rand’s “The Fountainhead.” For the record, I have not read any of Rand’s books, but her name has been coming up a lot even though she died back in 1982. There were three movies based on her book “Atlas Shrugged,” the first which was a critical and commercial flop, and yet the filmmakers still made a pair of sequels to it. John Oliver even did a segment about her on “Last Week Tonight” as he wondered why she was still considered relevant. I had to ask McKay why this book was so prominently featured in the portrait, and he helped school me in what Rand was really about.

“She was a refugee of Communist Russia, so she had been given the hard boots,” McKay said. “I think she was a fun partier supposedly so she hung out with the billionaires and was like fuck everyone else, let’s have a good time. She had seen the overreaction of the Communist Revolution so she was an extremist in the other way, and then you have these guys with dynastic wealth who have inherited millions of dollars who kind of feel shitty about it. And then here’s a woman telling you, let’s go have a big sex party and you shouldn’t feel shitty about having your money. She’s perfect for the Koch Brothers and it’s like she’s their bible because, otherwise, they’re going to have to give away a lot of their money, and they don’t want to do that.”

“Ever since I’ve been in college, I’ve always been having arguments with the Ayn Rand devotees,” McKay continued. “My point on Ayn Rand is she’s always been a bad writer. John Milius is a big right-winger, but the guy can write (remember Robert Shaw’s famous U.S.S. Indianapolis speech from “Jaws?”). You can be a right winger or whatever you want to be, just don’t be a shitty writer.”

“It’s funny because she becomes more important the more you get income inequality in our country, and the more billionaires you get the more her name comes back into the public,” McKay said. “In the 50’s and 60’s, she was fringe. The interview with Mike Wallace with her was like she was a cuckoo bird, and it is only now that our country’s kind of a little bit broken that suddenly she’s back in the mainstream.”

“We the Economy” is now up and running, and it has proven to be a clever and innovative way to teach us more about the U.S. economy. Be sure to check the website, and you can view “The Unbelievably Sweet Alpacas” below.